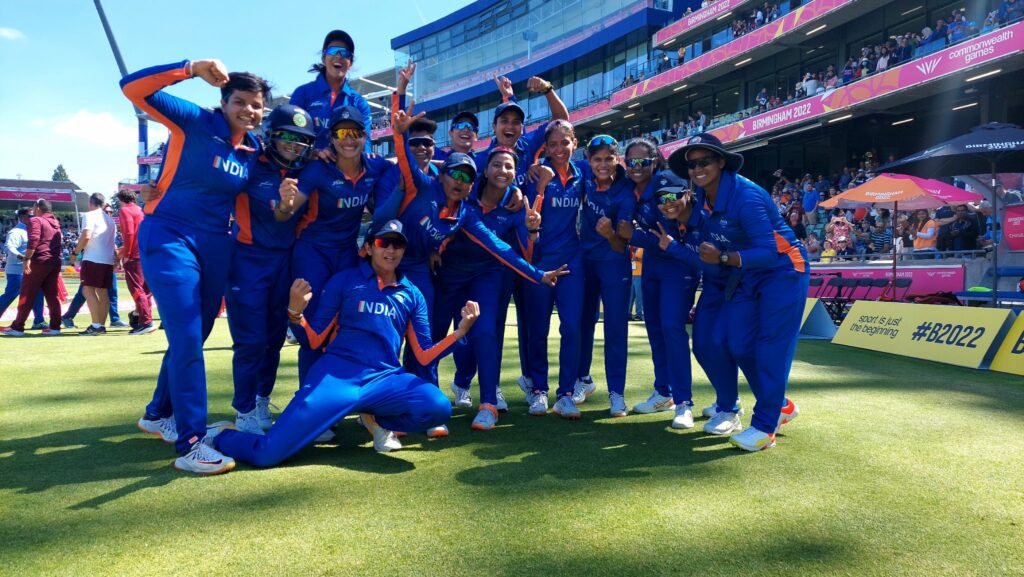 Smriti Mandhana and Jemimah Rodrigues starred with the bat, while Sneh Rana held her nerve in a tense last-over finish to help India women beat England by four runs in the first cricket semi-final at the Commonwealth Games 2022 in Birmingham.

“We are aiming for a Gold Medal at the Commonwealth Games,”

Mandhana had said before the India Women Cricket team’s departure to the United Kingdom.

Two weeks later, the team vice-captain stands at the forefront of the team’s impressive campaign, leading the run-scoring charts in the competition with 153 runs at 51 and a strike-rate of 156.12. 61 of the most imperious of those came off just 32 balls in the first semi-final against England at Edgbaston on August 6, setting it up for a nail-biting four-run win.

Mandhana struck eight hits to the fence and three over it while showcasing her full range, as the usually belligerent Shafali Verma endured an uncharacteristic struggle during her 17-ball 15 in an opening stand worth 76 off 47. The left-hander got to her fifty off just 23 balls, which is now the fastest at CWG 2022, and for India Women in all T20Is.

The sailing wasn’t as smooth thereafter, as Freya Kemp and England skipper Nat Sciver dismissed Verma and Mandhana within a space of five balls. India still had one-third of their innings left when skipper Harmanpreet Kaur fell to an excellent catch by Maia Boucher at backward square leg to help Kemp bag her second.

Step up the experienced pair of Rodrigues and Deepti, and the duo combined for 53 runs in 6.2 overs to help India cross 150 by the end of 19th. Rodrigues scored a valuable 44* off 31, featuring sublime inside out drives and lofts against spin and pace alike, none as emphatic as the one that came off the last ball of the innings off Katherine Brunt with the right-hander outsmarting the bowler’s shrewd adjustment.

Sophia Dunkley struck four boundaries within the first two overs of the chase as India seamers Renuka and Meghna struggled for lengths, calling for a quick change. Deepti, as usual, stood up with her off-breaks, trapping Dunkley leg-before for a quick 19 off 10. Danielle Wyatt, however, carried on, helping the hosts to 58/1 by the end of the powerplay.

Alice Capley ran herself out in an attempt for an extra run, and Wyatt scooped one onto her stumps off Sneh Rana to put India back in the hunt. Sciver was joined by wicketkeeper Amy Jones in a resurrecting act, with them adding 54 for the fourth wicket. Deepti conceded just three in the 18th over, which also saw the back of Jones via a run-out, to get it down to 27 required off 12.

Sciver, who struggled for timing and placement for a major part of her innings, pumped one over deep mid-wicket off Pooja Vastrakar on the third ball of the 19th, and four fortuitous leg-byes off the next ball tilted the balance once again.

Mandhana though wasn’t done for the day, and fired an accurate throw from deep mid-wicket to catch Sciver short of her crease. Sneh Rana was left to defend 13 off the final over, and the execution remained flawless, resulting in three singles – including a drop – and Brunt’s wicket within the first five balls.

Sophie Ecclestone, the top-ranked T20I bowler, swung her blade for a soaring six over long-on on the last ball of the game, but the first finalist had already been decided by then.

Australia will take on New Zealand in the second semi-final later in the day, with the gold and bronze medal matches to be played on August 7.