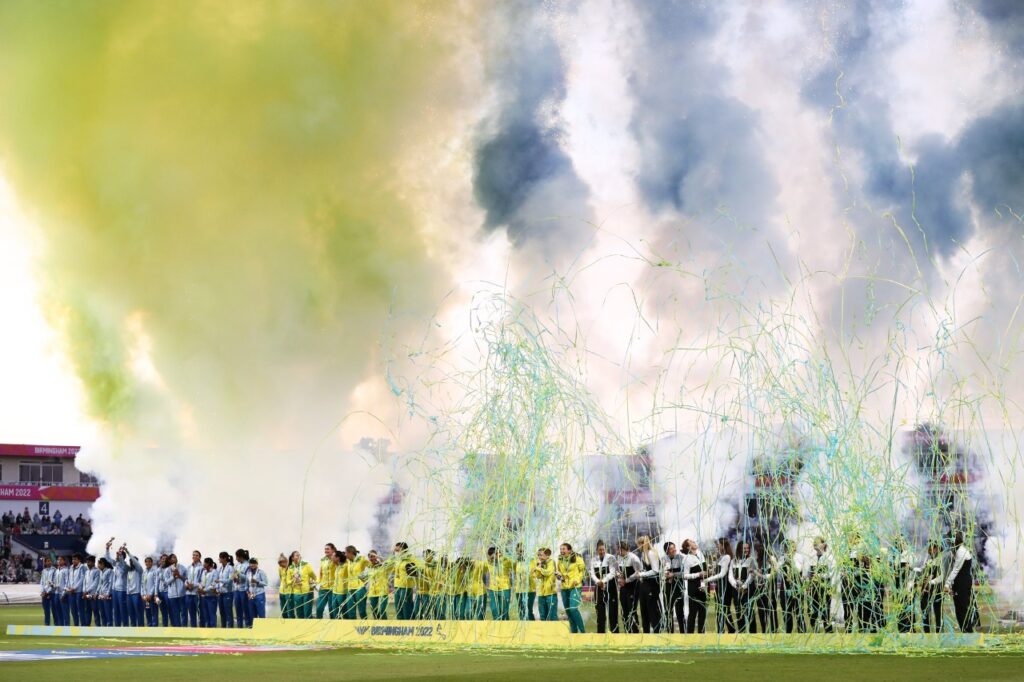 The World Champions Australia women defeated India by nine runs in the final of the women’s T20 competition at Commonwealth Games in Birmingham to clinch home a gold medal.

Chasing the target of 162, Harmanpreet Kaur-led Indian team lost both their in-form openers Smriti Mandhana and Shafali Verma inside the first three overs. Kaur and Jemimah Rodrigues then rebuilt the innings. Captain Kaur was the aggressor in the partnership as the duo started putting pressure on the Aussies.

They added 96 runs in their record partnership, putting India in a commanding position, bringing down the equation to 44 off 34 balls. But Megan Schutt cleaned up a tired Jemimah for a run-a-ball 33 in the 15th over to open up the game.

Ashleigh Gardner then struck twice in the next over, including a massive wicket of Kaur. The Indian skipper tried to play a scoop, but the ball hit her helmet and lobbed it in the air, with Alyssa Healy completing a diving catch. Kaur’s incredible knock of 65 off 43 included seven fours and two sixes.

India had lost their biggest hope, and Australia started to choke them further. Sneh Rana and Radha Yadav couldn’t hang in long, both getting run out. Deepti Sharma kept India in the hunt with a boundary off Schutt straight down the ground but was trapped LBW on the very next delivery.

Yastika Bhatia, who was subbed into the match as a concussion substitute for Taniya Bhatia, walked in with India needing 13 off 9. She was on strike in the last over, with 11 needed and one of the best defensive bowlers in the world Jess Jonassen setting her field.

Yastika danced down the track on the first ball but ended up yorking herself, and she denied the single to the shock of everyone. She came down the track again, this time hitting it to the long on. They tried to get back for two, but Meghna Singh was way short of her crease at the non-striker’s end. On the next ball, she was trapped plumb in front while trying to play a reverse sweep, as India were bowled out for 152.

Earlier, Australia won the toss and chose to bat first but they didn’t get off to a good start, courtesy of Renuka Singh yet again. The seamer trapped Healy in front for just 7 off 12 as they breathed a sigh of relief. Captain Meg Lanning took the attack to the opposition as she added 74 runs for the second wicket with Beth Mooney.

A brilliant piece of excellence from Radha at the non-striker’s end sent Lanning back for 36 off 26. Tahlia McGrath, who was tested Covid-19 positive ahead of the game but was allowed to compete under CWG’s guidelines, couldn’t make any impact as Radhe Radhe took a stunning catch at a backward point.

Mooney and Gardner continued to push, taking Australia to 125/3 at the end of 15 overs and looking set for a 180+ score. But India put the screws on with a quick few wickets, including Mooney, who scored a magnificent 61 off 41. The women in blue produced a fielding exhibition, something which has been an Achilles heel for them in the past.

This was the third loss in the final for Indian women at a big event, having previously lost to England in the 2017 ODI World Cup and to Australia in the 2020 T20 World Cup. They have been on a constant rise, and the big moment could be just around the corner.

Australia women completed a unique trilogy with a gold at Commonwealth Games, having won the most recent editions of the ODI World Cup and T20 World Cup.