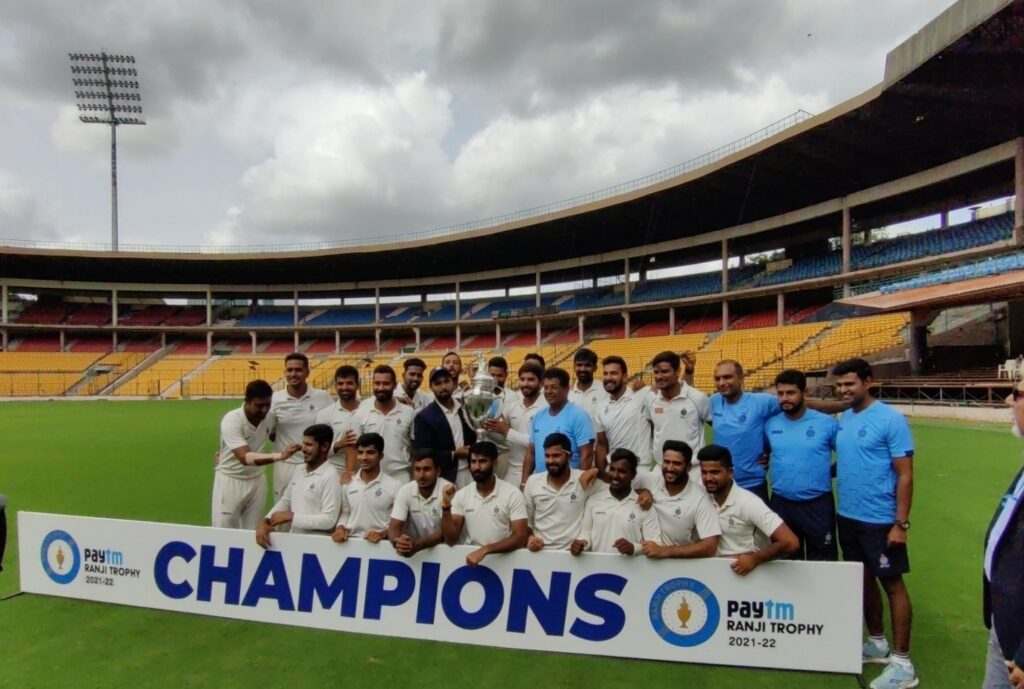 Madhya Pradesh created history on June 26, winning the coveted Ranji Trophy title for the first time in their long journey in domestic cricket. The central India rivals conquered the mighty Mumbai in a marquee final of India’s premier domestic first-class competition in Karnataka.

MP fulfilled the dream of their coach Chandrakant Pandit, a former Mumbai stalwart, who had tears rolling down his eyes as soon as his boys overhauled the finish line, feeling immensely proud of their achievement. It was a moment of resurrection, too, for Pandit, as it was at the same Chinnaswamy ground in 1999 when as captain of MP he lost the Ranji Trophy final to hosts Karnataka.

Considered one of the finest coaches in the Indian domestic circuit, it was Pandit’s sixth Ranji title as he continues to shape power-packed first-class teams and aid their journey to unprecedented success. MP benefited immensely through his hard-task-master attitude and attention to detail.

Those virtues were evident when the team took the field and kept Mumbai at bay despite losing the toss on Day 1 and being asked to bowl first. On an Indian surface that offered something early on for the bowlers, MP came up with a collective bowling effort, with Gaurav Yadav (4//106) leading the chart via a four-fer and Anubhav Agarwal (3/81) and Saransh Jain (2/47) playing their part proficiently.

Despite Mumbai’s rampaging middle-order batter Sarfaraz Khan scoring another hundred (134), and in-form opener Yashasvi Jaiswal (78) producing a critical top-order act, MP kept the opposition down to 374 all out – around 100-150 runs less than ideal, with the track getting increasingly better for batting.

The progressively batter-friendly nature of the track meant a hard grind for the Mumbai bowlers, who saw opening batter Yash Dubey (133), Shubham Sharma (116) and Rajat Patidar (122) producing fantastic hundreds and taking their team into a crucial, game-defining first-innings lead.

To put the cherry on the cake to MP’s batting performance, Jain backed up his bowling exploits with a knock of 57 lower down the order and helped MP reach a position of dominance at 536 all out, taking a lead of 162.

Shams Mulani picked up a five-fer for Mumbai in the first-innings, but it summed up Mumbai’s collective bowling unit that he went for 173 runs in the process and bowled over 63 overs for the same.

Things were different for MP, though, as they had spinner Kumar Karthikeya Singh taking a four-wicket haul (4/98), backed up wonderfully by two wickets apiece from Yadav (2/53) and Parth Sahani (2/43). The trio ran through the lengthy Mumbai batting unit, getting them all out for 269 with a lead of only 107 runs into the final innings.

Mumbai would have been extremely disappointed with their batters for once again getting in but getting out without a substantial individual score on the board. Captain Prithvi Shaw (44), Hardik Tamore (25), Armaan Jaffer (37), Sarfaraz Khan (45) and Suved Parkar (51) all had the opportunity to make a big hundred and at least help Mumbai avoid an outright loss. But none could manage to do so.

Chasing a paltry target of 108 runs, MP had their fair share of stutters along the way, losing four wickets, but they eventually reached home with Patidar (30*) hanging in their not out and rejoicing in his team’s incredible achievement.