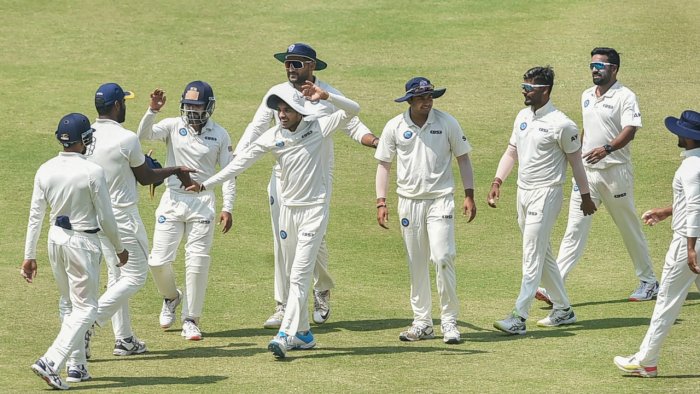 Some relentless batting from Jharkhand knocked the Nagaland side out of their wits as they piled on a staggering total of 880 in the first innings of the preliminary quarter-final game in the Ranji Trophy.

After two days of spirited batting, a double-century by wicket-keeper Kumar Kushagra, and two centuries by Virat Singh and veteran spinner Shahbaz Nadeem, the Jharkhand innings eventually came to a close on a score of 880, which included a mind-boggling last wicket partnership of 191 between Nadeem and Rahul Shukla, who was left stranded on 85 after looking well on course to score a century.

Nadeem and Shukla’s mammoth 191-run partnership is surprisingly not the highest in tournament’s history, a record that is held by Ajay Sharma (78) and Maninder Singh (259*), who added 233 runs for the last wicket for Delhi against Mumbai in the semi-finals of the 1991/92 Ranji Trophy season.

In response, Nagaland fought to get to a respectable but not nearly sufficient total of 289, on the back of Chetan Bist’s seventh first-class century, as the wicket-keeper scored an unbeaten 122 for the north-eastern state. Despite a fighting effort by the Nagaland squad, Jharkhand were just too good for them, as they eventually folded for 289. Nadeem was the pick of the bowlers, as he snared three wickets while conceding 70 runs in his 37-over spell.

However, Chetan Bist’s effort was a brilliant one at that, as he added 24, 25, 45, 35 for the last four wickets, and was instrumental in Nagaland getting to 289, which looked like a distant dream at one stage, struggling at 155/5. His brilliant innings, managing strike at one end was what pushed Nagaland to their total. However, what followed after Nagaland’s dismissal was the more interesting development.

Despite having a 591-run lead, Jharkhand did not enforce the follow-on, but instead decided to bat again. Although they have technically qualified for the next round by virtue of their substantial first-innings lead, most would have expected the Jharkhand side to go for the win in the pre-quarters. The intent was clear from the outset from the Jharkhand, as they set out to play attacking cricket.

Jharkhand’s innings was nothing short of historic, as the batsmen took full control of the game from ball one. The bowling, however, was quite ordinary from the Nagaland bowlers, but it was nonetheless a case of excellent batting from the Jharkhand side, who were evidently levels above the Nagas in terms of quality.

Kumar Suraj and Anukul Roy batted around the outstanding Kushagra, getting handy half-centuries, as Kushagra went on to make a fabulous 266. He reached his double century off just 213 balls, which again raises quite a few questions over the competence of the Nagaland bowlers.

Shahbaz Nadeem, who is not quite known for his abilities with the bat, also took full advantage of the listless bowling from Nagaland and capitalised big time, scoring a top-class 177.

The veteran left-armer was looking well on course to make a double hundred, Jharkhand’s second of the innings before he was dismissed, breaking a 191-run stand between him and Shukla for the last wicket.

Jharkhand’s total of 880 was not the highest ever in the Ranji Trophy, but their monumental score did find a place in the history books, making it the fourth-highest total scored by a team in the Ranji Trophy, behind Hyderabad’s score of 944/6 in the 1992/93 edition of the tournament, and identical scores of 912 from Tamil Nadu and Madhya Pradesh in 1988/89 and 1945/46 respectively.

The women’s Indian Premier League looks set for a launch in March 2023, with the…