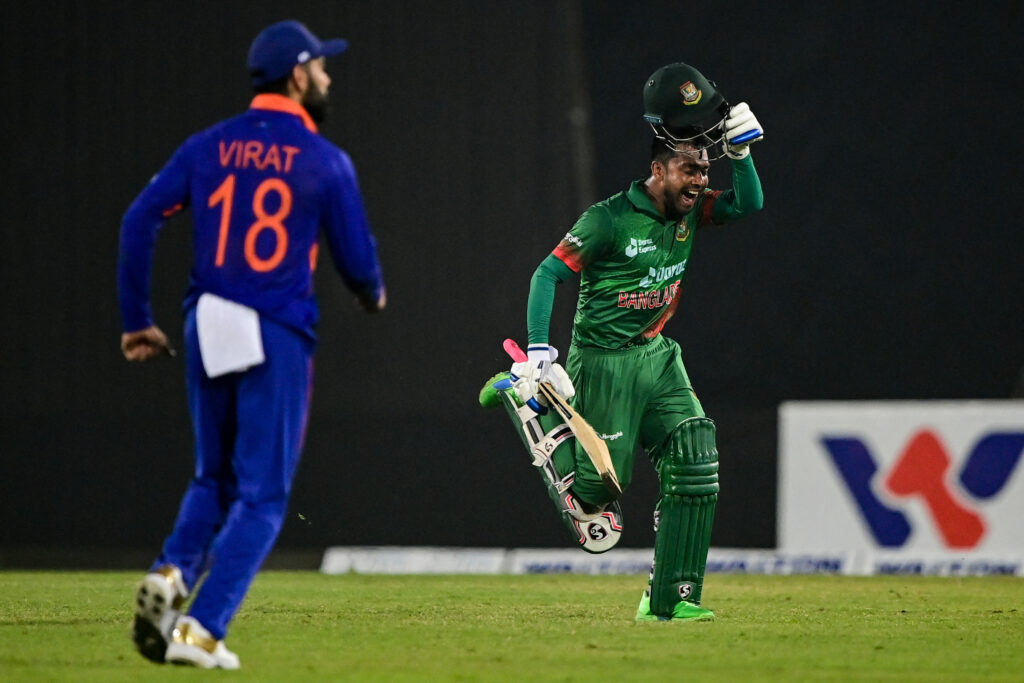 Mehidy Hasan Miraz revisited how he structured his maiden ODI hundred against India in Dhaka on Wednesday, one that helped Bangladesh register a historic series-clinching win.

The all-rounder walked in to bat at No.8, with the hosts down at 69/6 from 19 overs after having won the toss. Mehidy added 148 runs for the seventh wicket with Mahmudullah, the joint third-highest by any pair for the seventh or a lower wicket in ODIs, and a further unbroken 54-runs for the ninth wicket with Nasum Ahmed to lift Bangladesh to 271/7 in the allotted 50 overs.

In a stunning counter-attack at the back end, he struck two sixes off Shardul Thakur in the last over, before a single off the final ball got him to his maiden ODI ton. The right-hander struck eight fours and four sixes in an unbeaten 83-ball stay, while Mahmudullah managed seven fours in his 77 off 96.

Mehidy reflected how the pair focused on playing one ball at a time, and acknowledged Mahmudullah’s constant support through the partnership.

“We never had a target in mind. We lost six wickets. So [the thinking was] how many could we score? We tried to take one ball at a time and build a small partnership and not think about setting a target. We tried to play to the situation and talked to each other regularly.

“I liked that he respected me even though he is the senior player. He listened to me when I pointed out that he was panicking. I told him not to attack at times and to take the game deeper. The small conversations helped us in our partnership,”

It was Mehidy’s second game-changing contribution in the series, after he had scored an unbeaten 38 off 39, and added an unbeaten 51 for the last wicket with Mustafizur Rahman to power Bangladesh to a thrilling one-wicket win. The 25-year-old revelled in the joy of producing another clinic against the fourth-ranked ODI side.

“It is a great moment for me to get my first ODI century. I will never forget this moment. We were in serious trouble today. My partnership with Riyad [Mahmudullah] bhai was very important. It is a big deal for me. India are one of the best teams in the world,”

Bangladesh were in control for a major part of their defence until Rohit Sharma, who had left the field with a thumb injury earlier in the day, walked out to bat at No.9 with stitches on his hand, with India needing 65 off 45.

The India skipper struck an unbeaten 51 off 28 to keep his side in hunt till the last ball, but Mustafizur held his nerve in the closing stages to seal a five-run win. The 48th over bowled by Mustafizur to Mohammed Siraj was a maiden, bringing down the equation to 40 required off 12, which Mehidy felt was a major turning point.