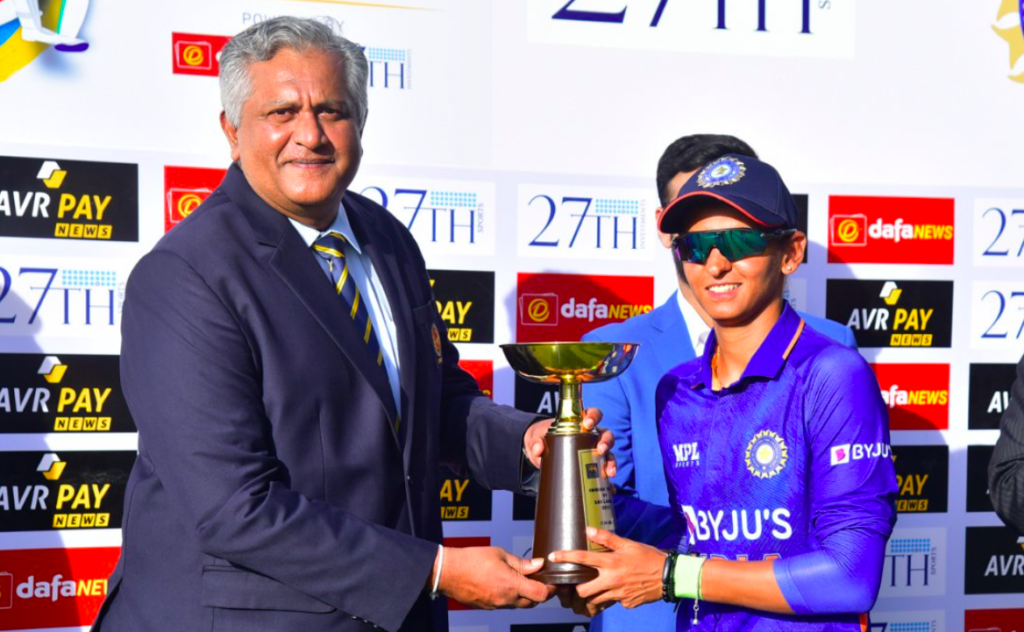 Sri Lanka skipper scored a magnificent 80* off just 48 balls to help his side chase down 139 by seven wickets at Dambulla on June 27. The visitors bagged the series by 2-1 but Sri Lankans did manage to break their 12-match losing streak against India women. Chamari Athapaththu was the star for the hosts as she hammered an unbeaten 80 off 48 to take the team home, chasing 139 in 17 overs.

As it happened, India won the toss and elected to bat first but they didn’t get off to a desired start as Shafali Verma was dismissed in the very first over. Smriti Mandhana and Sabbhineni Meghana scored 22 runs each and added a 41-run stand for the third wicket before both lost their wickets in consecutive overs.

At 51/3 in 9 overs, captain Harmanpreet Kaur joined hands with Jemimah Rodrigues to rebuild the innings.

The duo put on a 64-run partnership for the fourth wicket before Ama Kanchana dismissed Rodrigues for 33 off 30. Kaur remained unbeaten on 39 off 33 while Pooja Vastrakar’s 6-ball 13 lifted the team to 138/5.

Chasing the target, the hosts lost opener Vishmi Gunaratne in the first over while Radha Yadav picked Harshitha Samarawickrama in the fifth with the scoreboard reading 37/2. Athapaththu was at her brutal best, bringing up her fifth T20I fifty off just 29 balls.

Nilakshi de Silva provided a solid hand at the other end with 28-ball 30 as the pair added a record 77-run partnership for the third wicket. The visitors did not have any answers to Chamari, who hit the winning boundary and remained unbeaten on 80.

Kaur was awarded the ‘Player of the series’ for her 92 runs in the series while being dismissed only once, along with a wicket.