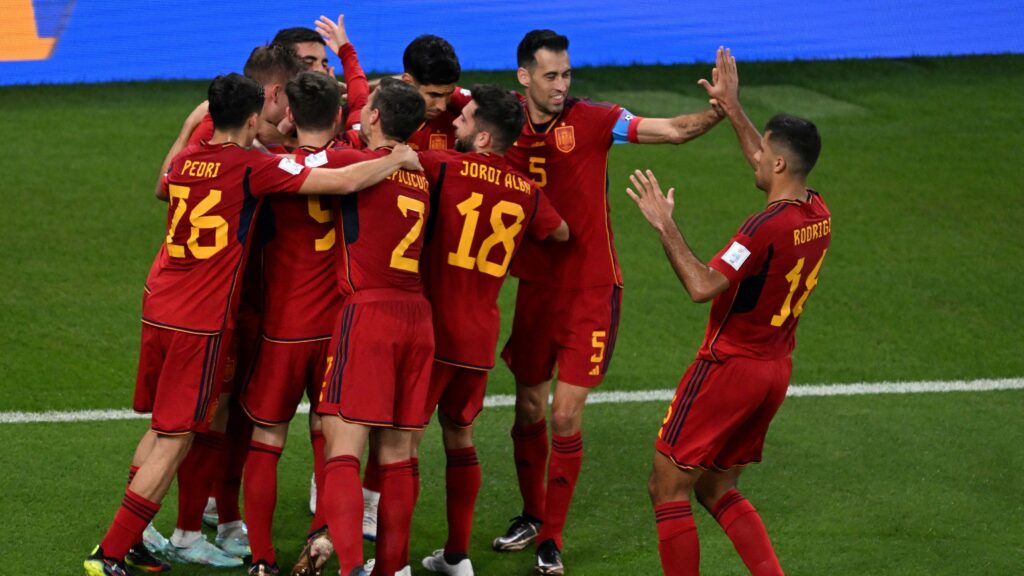 2010 champions Spain kicked off their journey in this edition of the FIFA World Cup in spectacular fashion, as they pummeled a listless Costa Rica side 7-0. There were six different names on the scoresheet for Spain and the Central American side was just unable to cope up with the kind of quality that La Furia Roja possessed.

Luis Enrique’s line-up for the opener was slightly surprising, as the veteran coach opted to field Rodri as a centre-half, ahead of Pau Torres and Eric Garcia. Unai Simon was the goalkeeper of choice, with stalwarts Cesar Azpilicueta and Jordi Alba in the full-back positions. The midfield consisted of a Barcelona trio, Sergio Busquets along with Pedri and Gavi, while Marco Asensio, Dani Olmo and Ferran Torres were the front three.

The Spaniards were outstanding from the word go. Olmo put them ahead in the eleventh minute with some clever footwork before sliding it into the net. Alba, who had a stellar game against the Keylor Navas-led side, played a brilliant pass to spot Asensio in the middle, who thumped in a second goal.

The writing was on the wall for the Costa Ricans who conceded a penalty at the half-hour mark. Torres made absolutely no mistake to put his side three goals to the good, as the game reached the halfway stage.

The Barcelona striker scored yet again early in the second half, as he displayed a brilliant piece of close control before Golden Boy award winner Gavi scored a screamer with fifteen minutes remaining. An Alvaro Morata lobbed pass towards the Barcelona midfielder was struck with venom from outside the foot, hitting the bottom right corner perfectly in what was definitely one of the goals of the tournament.

This wasn’t the end of the Costa Ricans’ suffering, as a Nico Williams cross was improperly cleared by Navas, which fell kindly to Carlos Soler, who took full advantage and smashed it into the net. Morata, who came on for Torres, hit the final nail on the coffin, as he executed a beautiful finish to end the game at a humiliating 7-0.

The Costa Ricans were utterly dominated by La Roja, who had a staggering 82% possession. Luis Suarez’s men were not able to register a single shot as they were played off the park. The win will give Spain a lot of confidence for their next game against an embattled Germany, while Costa Rica will not be all too happy to face Japan, who are coming off one of their biggest ever wins.

Meanwhile, a spirited Canadian performance was in vain as Belgium sneaked through with a 1-0 victory. Roberto Martinez’ men started off on the worst note possible, as a hand-ball in their own box led to an early Candian penalty.

Bayern Munchen star Alphonso Davies stepped up to the spot ahead of Jonathan David, but was not able to put his spot kick past the long levers of Thiabut Courtois. The rebound would have fallen conveniently to Davies, but a collision between him and Buchanan meant that the two sides were still locked together.

Eden Hazard showed glimpses of his former self, a rare sighting after his move to Real Madrid, as he played a couple of good forward passes, and also a few pieces of skilful dribbling. However, the only goal in the game came from an outstanding line-breaking pass from Toby Alderweireld, which landed at Michy Batshuayi’s feet, who took it on the half-volley to score the decisive goal of the match.

Canada were brilliant for the majority of the game, but were unable to capitalise on the three big chances that they created. Their inability to finish chances might prove to be their downfall come the later stages, where this game could be the difference between qualification and elimination.