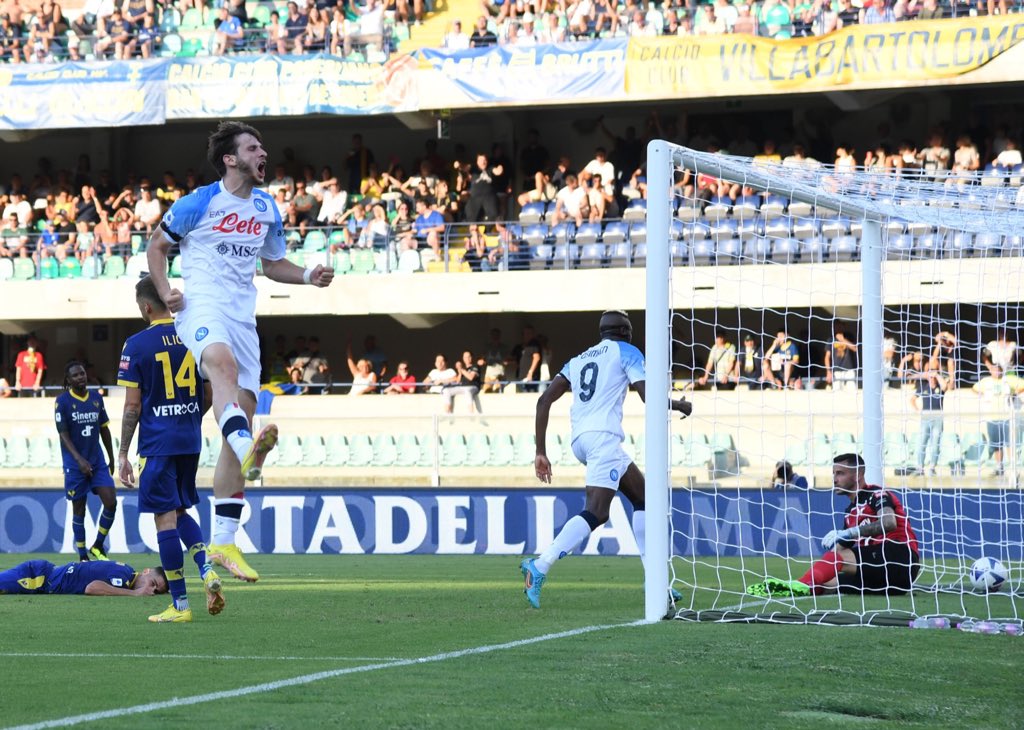 It promised to be a glorious night for Hellas Verona when forward Kevin Lasagna put them ahead a minute before the half-hour mark against Luciano Spalletti’s new-look Napoli.

While the Partenopei seemed lost early on without the reliable Dries Mertens and Lorenzo Insigne – both of whom have left the club – things began to click soon after the Verona opener. New signing Khvicha Kvaratskhelia proved his credentials when he scored his and Napoli’s first of the season: a header off a Hirving Lozano cross in the 37th minute.

Victor Osimhen put Spalletti’s side in front on the stroke of half-time, the forward running at the back post to tap in a flick-on from a corner. But, Verona equalized on the other side of the break courtesy of their new forward Thomas Henry, who rose highest to head home a cross from Marco Davide Faraoni.

From then on, however, it was all Napoli. Piotr Zielinski restored his team’s lead in the 55th minute after he was sent through on goal with a perfectly-timed pass by Kvaratskhelia. Shortly after, Stanislav Lobotka added a fourth, a superb solo effort from outside the box.

Finally, Matteo Politano capped off the win with a low strike in the 79th minute after some good combination play between him, Osimhen, and the new Napoli captain Giovanni di Lorenzo.

Juventus kept up with their rivals to the South courtesy of a 3-0 win over last season’s giant-killers Sassuolo. Summer signing Angel Di Maria got the ball rolling with the opener in the 26th minute, the Argentine mishitting his volley that somehow still found its way past Andrea Consigli in the opposition goal.

Dusan Vlahovic added to the scoreline just before the break. Fouled by Gian Marco Ferrari inside the Sassuolo box, the Serbian took the resulting spot-kick and put the Bianconeri two-nil up. He combined with Di Maria soon after the restart to score his second and Juventus’ third, helping his team to a comfortable win.