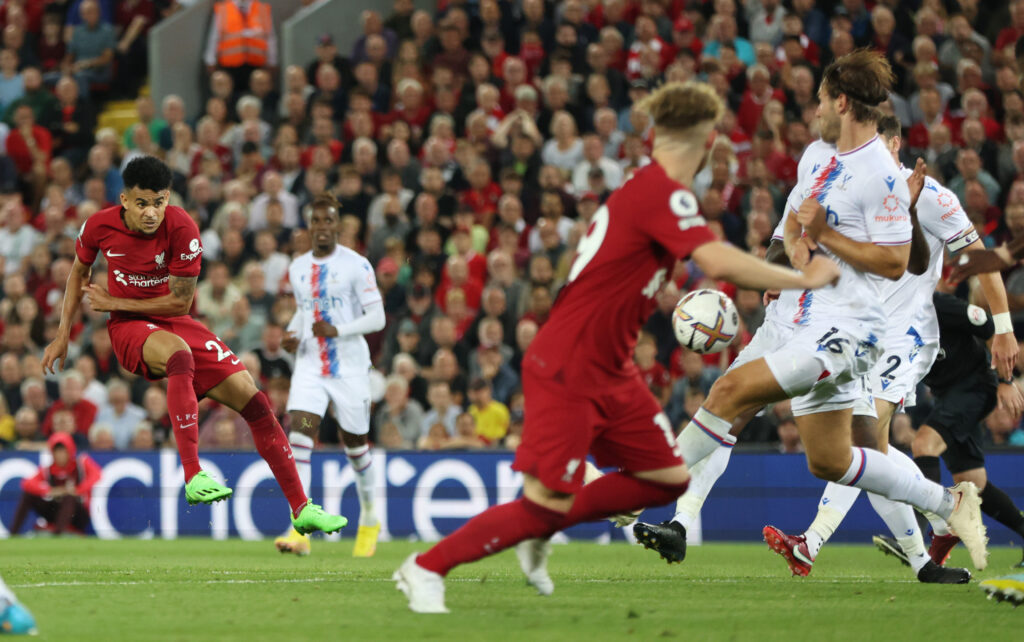 Darwin Nunez’s second-half red card nearly cost Liverpool dearly. But, Jurgen Klopp’s men came from a goal and a man down to steal a point off Crystal Palace, who led through Wilfried Zaha’s early goal.

A superb second-half showing against Manchester City and Fulham earned Nunez his first start for Liverpool. The forward went close too, at both ends of the first half, blazing over on the first occasion from close range and failing to get his shot away in time on the second.

Sandwiched between Nunez’s two chances was Crystal Palace’s opener, scored by Wilfried Zaha but created out of thin air by Eberechi Eze. Bringing down the ball with a light first touch, Eze left two Liverpool defenders in his wake inside his own half before releasing his teammate with a perfectly timed and weighted through ball.

Zaha collected the ball in his stride and finished the move with a confident strike into the corner. Wary of Zaha’s pace, Alisson raced off his line quickly the next time the Ivorian was released, closing down his shooting angles and saving his side from falling two goals behind before the interval.

Things got worse for the Reds before they got better. An altercation between Nunez and Palace’s Joachim Andersen ended in a red card for the former. The Uruguayan, angered by a push, headbutted the Danish defender in his face and is now looking at a lengthy ban on the sidelines.

Despite being a man down, Liverpool leveled things up a minute past the hour owing to the individual brilliance of Luis Diaz. The Colombian tip-toed around the Palace defence on the edge of the box before unleashing a superb strike into the corner, out of Vicente Guaita’s reach. Liverpool survived a late scare when an outstretched Zaha could only hit the upright from the outside of his right foot.

It has not been the ideal start that Jurgen Klopp would’ve hoped for, but Liverpool play Manchester United next – a club perennially in a crisis – whom they beat by an aggregate score of 9-0 last season.