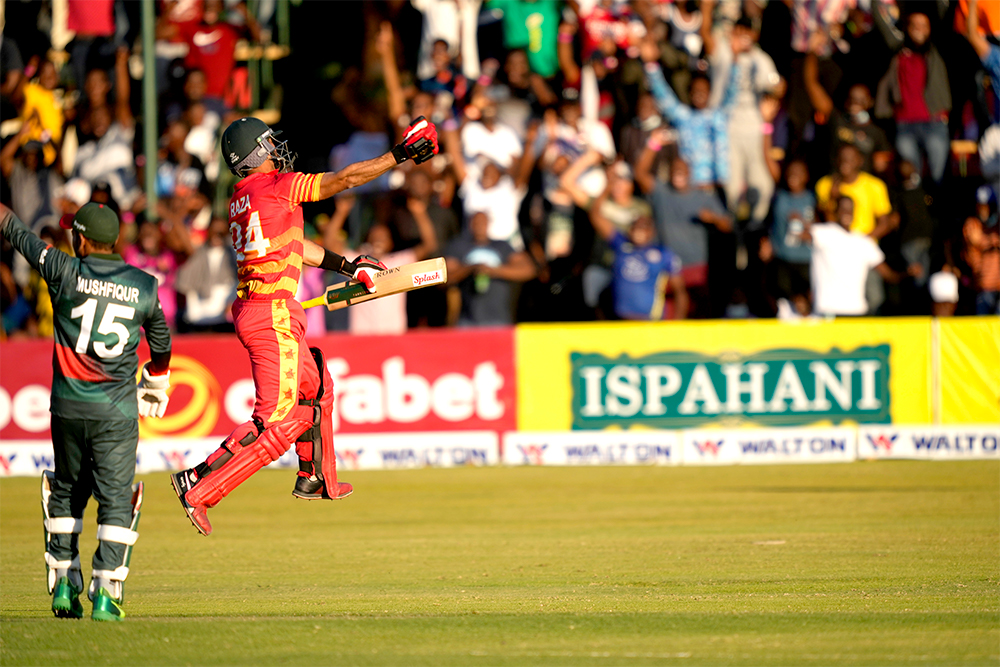 Zimbabwe continued their excellent form with yet another win over Bangladesh, staging an unbelievable comeback to chase down a competitive total of 291, gaining an unassailable lead in the three-match ODI series.

Sikandar Raza was the star of the show once again, scoring another century while also picking up three wickets with ball in hand. Zimbabwean skipper Regis Chakabva also got a quickfire century.

The series win comes as a morale boost both for the players and the fans, after the nation’s exile from international cricket following some governance conflicts meant that they could not enter the qualifying tournament for last year’s ICC T20 World Cup.

Chakabva won the toss at the Harare Sports Club and decided to bowl first. His counterpart Tamim Iqbal started off in fine form, racing to a half century within the first ten overs. Although his innings ended shortly after reaching the milestone, his knock was crucial in setting up his side’s innings for a big total.

Iqbal’s wicket was followed by a couple of starts, but none of them materialised into anything big before the vastly experienced Mahmudullah Riyad came in and played a fine knock of 80*, batting until the end of the innings to get Bangladesh to an imposing total of 290 in their 50 overs. Afif Hossain also posted a notable contribution of 41 as Bangladesh made sure that the Zimbabweans had their task cut out.

The hosts began in poor fashion. Takudzwanashe Kaitano was dismissed for a golden duck off the third ball of the innings, while the bowlers dominated the first 15 overs of the Zimbabwe innings, reducing the hosts to 49/4.

It was at this point that skipper Chakabva and Raza got together. The former was the more aggressive of the two, striking boundaries at will, while the latter built up the chase in a strikingly distinct method from the previous game. Both batsmen reached centuries, and Zimbabwe were firmly in the driver’s seat.

Chakabva departed after a wonderful 102 in just 75 deliveries, following which Tony Munyonga’s explosive cameo ensured that Zimbabwe chased the total down with more than two overs to spare. Raza was named man of the match for his scintillating all-round performance, as he picked up 3/58 before scoring a match-winning 117*.