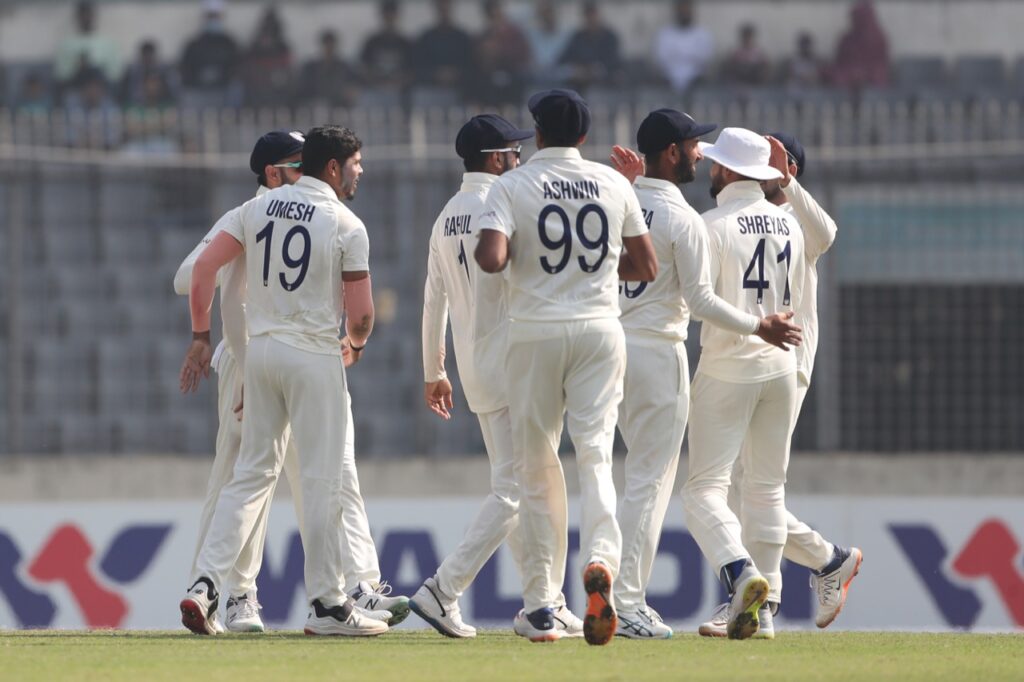 Ravichandran Ashwin and Shreyas Iyer played starring roles in a nervy fourth morning’s play to help India clinch a fighting three-wicket win in the second Test against Bangladesh at the Shere Bangla National Stadium on Sunday to progress further in the race to the ICC World Test Championship final.

Having already lost skipper KL Rahul, Shubman Gill, Cheteshwar Pujara and Virat Kohli late on Day 3 in their run-chase of 145, Team India resumed at overnight 45/4, and there was instant excitement in the first over, with night-watchman Jaydev Unadkat surviving a close leg-before review by the hosts.

Unadkat tried to slog his way out with a soaring six over mid-wicket off the very next ball, but was trapped lbw by Shakib Al Hasan in the next over. Rishabh Pant, arguably India’s best batter on form, looked comfortable with his intentful footwork on a challenging surface, until being undone by Mehidy Hasan Miraz, who got him leg-before for nine. The off-spinner then castled Axar Patel for 34 to make it five for the innings, leaving India at 74/7, still 81 away from the target.

It was at this point that Iyer and Ashwin started putting on a gritty stand, showcasing great application with their defensive batting and counter-attacking strokes in between on a progressively challenging surface. Ashwin was handed a reprieve early in his innings, with Mominul Haque, who had snaffled a brilliant catch to dismiss Kohli on Friday, shelled a relatively simpler one off Mehidy’s bowling.

Ashwin rode his luck again as a thick outside edge off a lazy drive off medium pacer Khaled Ahmed flew wide of the slip fielder. Three overs later, he sealed the deal with a one-handed six and back-to-back fours off Mehidy Hasan Miraz, helping India complete a series whitewash.

The 81-run stand is now India’s highest for the seventh wicket in fourth innings in a winning cause. Ashwin, who also bagged six wickets across the two innings, was named the Player of the Match.

The win helped India consolidate their position at No.2 in the ongoing World Test Championship 2023 points table. Their last assignment in the cycle is the four-match Border-Gavaskar series against Australia and home, to be played in February-March.