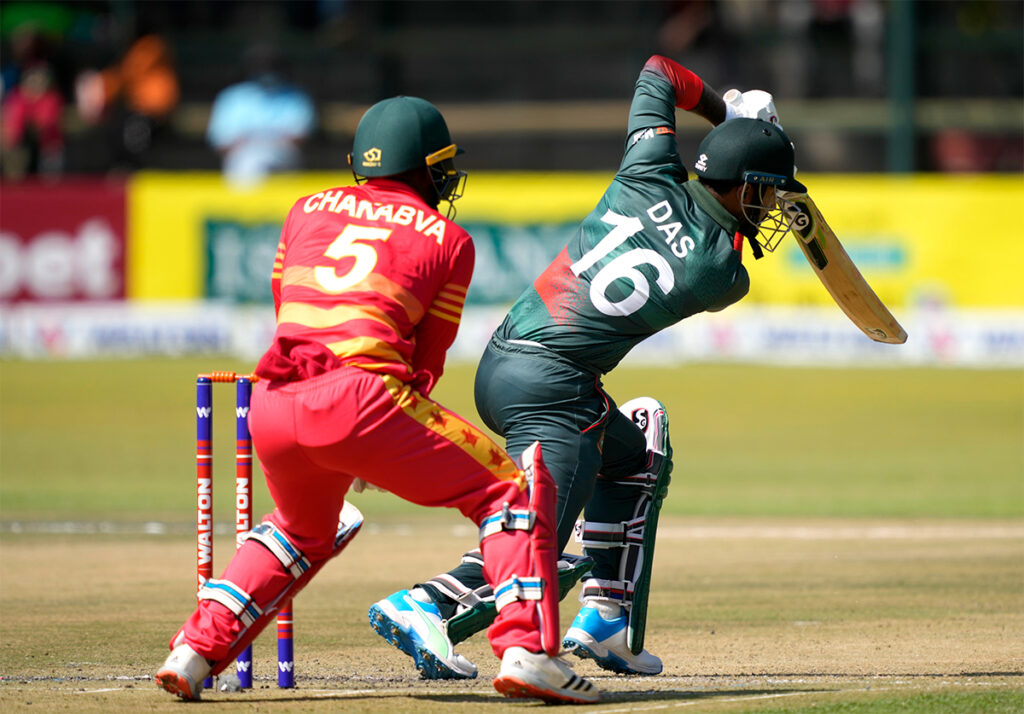 Bangladesh’s key batter Litton Das is doubtful for the forthcoming Asia Cup in UAE after being ruled out of the game for a month due to a hamstring injury. He picked up the injury while playing the first ODI against Zimbabwe on August 5 in Harare.

Batting set on 81 at the time, the right-hand batter complained of pain while he went about completing a single and was soon down on the turf with the medical staff attending him. In no position to recover immediately and resume his innings, the 27-year-old was stretchered out of the ground.

The detailed extent of the injury was not confirmed at that point. But Bangladesh physio Muzadded Alpha Sany said after the game that Das is down with a Grade 2 muscle strain and will take three to four weeks to recover.

“Litton Das hurt his hamstring while batting in the first ODI. We sent him for a scan during the match. He has a grade 2 muscle strain. It takes three to four weeks to recover from this type of injury. So we are not getting Litton [back] during this series,”

ESPNcricinfo quoted him as saying.

Sidelined for the next two ODIs of the series, which Zimbabwe now leads 1-0, Das is also heavily doubtful to take part in the Asia Cup T20I tournament in UAE, considered critical to Bangladesh’s preparations for the T20 World Cup 2022 in October-November. The regional competition starts on August 27, with Bangladesh’s Group B encounters scheduled on August 30 and September 1 against Afghanistan and Sri Lanka.

Das has been a key player for Bangladesh in the top-order for T20Is – a format they’ve long struggled in. In a phase where fans have been concerned over the team’s 3-0 whitewash in the Caribbean and the 2-1 series loss in Zimbabwe, he has been his team’s most promising striker. He has made 237 runs from eight innings for the year at 138.59.

Bangladesh aren’t short of injury concerns heading into the remaining matches in Zimbabwe and the Asia Cup in the Middle East. Two other players part of the travelling squad picked up injuries during the first one-dayer in Harare.

Former skipper Mushfiqur Rahim suffered a thumb injury while batting and didn’t take the field at all for Zimbabwe’s spirited and successful run-chase, where they hunted down the visitors’ massive 303/2 with their five wickets intact. Rahim produced a knock of 52 not out off 49 deliveries and was looking in good flow for the rest of the series.

There was a dark cloud hovering over the veteran’s participation for the next two matches, but Sany said the injury is “nothing major“ and the right-hand batter should be ready to go come August 7 for the second ODI.

One more Bangladeshi cricketer Shoriful Islam was hurt during the one-day series opener. He had a flush on the knee after he tried to grab hold of a return catch from Innocent Kaia. Unlike Mushfiqur, Shoriful returned to the field. He even tried to bowl but soon left the ground in visible pain.

“Mushfiq bhai also hurt his thumb while batting, but it is nothing major. He can hopefully play in the next game. Shoriful felt numb where the ball struck him but we are hopeful of good news regarding him tomorrow,”

Bangladesh had already lost stand-in T20I captain Nurul Hasan from the tour of Zimbabwe due to a finger injury. Like Das, he is crucial to the T20I set-up and is part of the list of injury concerns heading to the Asia Cup.