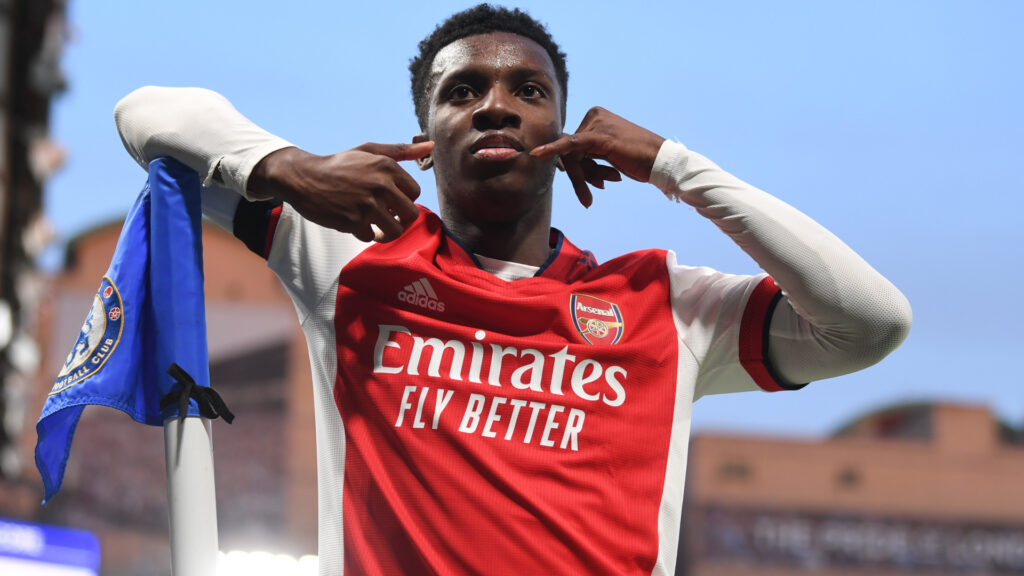 Arsenal forward Eddie Nketiah has performed a remarkable U-turn and is now expected to stay at the club for another five seasons, reports The Athletic. The 22-year-old was set to leave his boyhood club upon contract expiry this summer.

The expectation had been that the player would end his seven-year association with the Gunners and head for a new challenge. Despite making a string of starts towards the end of the 2021/22 season, he was second-choice behind Alexandre Lacazette and Pierre-Emerick Aubameyang throughout the campaign.

Crystal Palace and Brighton had reportedly shown interest in signing the young forward earlier this season. Meanwhile, Nketiah had already gained experience leading the line for Leeds United – albeit temporarily – in his half a season on loan at Elland Road back in 2019. Germany’s Bayer Leverkusen, too, were linked with a move for the England youth international.

While the two sides are yet to announce an agreement, the expectation is that Nketiah will pen a new five-year deal with the club he joined from rivals, Chelsea. As per Sami Mokbel of the Daily Mail, the forward will also be in line for a pay increase – he will earn in the region of 100,000 pounds per week for the duration of his new contract, in addition to a 5 million bonus.

Nketiah, who made his debut for Arsenal in 2017, has accumulated nearly a hundred appearances for the North London club. In this period, he has scored 23 times, including 10 in the 2021/22 campaign, which is his best tally to date.

Furthermore, in 2018, the youngster won the Toulon tournament with the England youth side, while a year later, he was part of the Arsenal squad that beat Chelsea and Liverpool to win the FA Cup and the FA Community Shield, respectively.