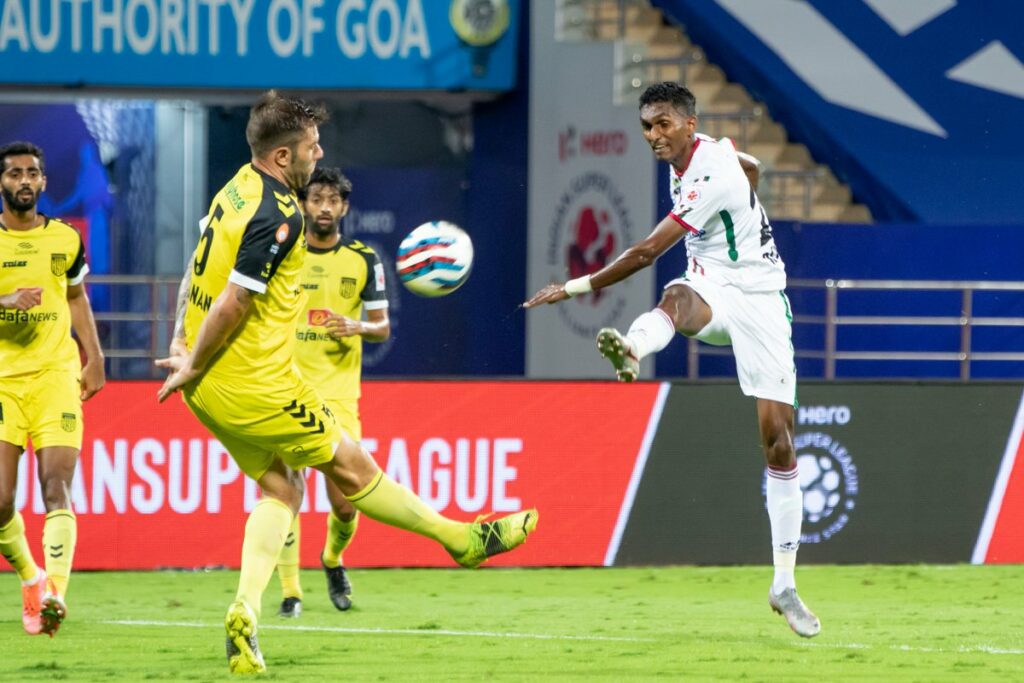 Liston Colaco and Manvir Singh scored the goals for ATK Mohun Bagan during a three-minute period just short of the hour mark, as they beat league leaders Hyderabad FC on Tuesday night.

Manolo Marquez’s men were halted in their tracks by last season’s runners-up ATK Mohun Bagan. The Mariners beat the Nizams 2-1 at the GMC Athletic Stadium on Tuesday night, courtesy of goals from forward Manvir Singh and ex-Hyderabad striker Liston Colaco.

Better chances presented themselves to ATKMB during the opening stages. In the eighteenth minute, for example, the ball broke to Hugo Boumous just outside the Hyderabad area, prompting the midfielder to take the ball outside the defensive line and shoot at goal – but he missed the target.

A minute later, Colaco’s cross bounced off David Williams and landed in front of Boumous – central to the goal, inside the opposition box – but his snap-shot was parried away by Laxmikant Kattimani.

💪 Did his best to keep us in the game!

At the other end, Bartholomew Ogbeche had a shot cleared off the line by Subhasish Bose while, minutes later, Nikhil Poojary’s strike was turned over the bar by Amrinder Singh.

After the break, substitute Rohit Danu thumped the underside of the crossbar with a fierce volley from inside the box. From the Mariners’ perspective, the ball fell on the right side of the line, and they survived a scare.

The opening goal came in the 56th minute from a Hyderabad corner. The Nizams failed to make much of the opportunity themselves but, as the ball fell to Williams and he sent Colaco through, they found themselves hurtling back to protect an isolated Kattimani.

Colaco was too quick, though, and he finished confidently to put his side a goal to the good. Three minutes later, Joni Kauko dinked the ball over the Hyderabad defence for Manvir to latch on. The attacker timed his run to perfection, rounded the goalkeeper, and slotted the ball into the corner to make it 2-0 to ATKMB.

Joel Chianese pulled a goal back for Hyderabad in the 67th minute off a rebound, and the Nizams looked to have been energized by the renewed hope.

But their dominance did not last long; Mohun Bagan attacked the spaces left behind by Hyderabad as they committed men forward in search of the equalizer and were only denied an even bigger margin by Colaco missing an open goal twice.

ATKMB held onto their lead, nonetheless, cutting Hyderabad’s lead at the top to just three points.