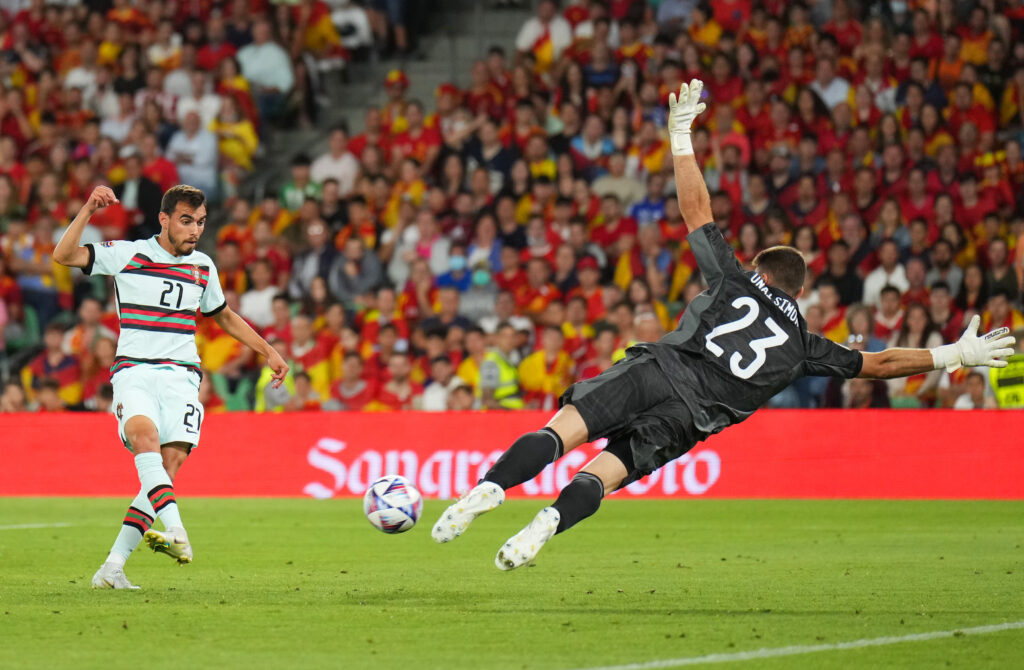 Last edition’s runners-up Spain could only muster a 1-1 draw against Portugal in their 2022/23 UEFA Nations League A, Group 2 opening fixture, while the Czech Republic kicked off the campaign on a high note after beating Switzerland 2-1.

Looking to go one better this time around, Spain met Portugal at the Estadio Benito Villamarin to get their Nations League campaign underway. It was the Selecao, however, who fashioned out the best chance of the opening phases of play when Raphael Guerreiro found Serie A’s MVP Rafael Leao in space inside the box; his shot tipped over the bar by Unai Simon.

Midway through the first half, Alvaro Morata gave La Roja the lead with a simple tap-in from close range. The forward was left with the easiest of tasks after Pablo Sarabia laid the ball on a plate for him to score.

Shortly before the half-hour mark Carlos Soler had the chance to make it 2-0 when the ball fell to him on the rebound after his initial shot had been saved by Diogo Costa. However, falling backwards, he put his effort over the bar.

Simon was called into action again at the hour mark when Andre Silva poked the ball out wide to Leao. The winger’s deft first touch sat Diego Llorente on the ground, but his second, the shot, was scuffed out by the Spanish custodian. Nevertheless, Portugal did grab the equalizer in the 82nd minute through substitute Ricardo Horta, who finished a Joao Cancelo cross from close range.

Spain had a late opportunity to win the match when Costa’s weak parry fell to the head of Jordi Alba waiting in the centre of the box, only for the left-back to put his header on the wrong side of the post. The match, as a result, finished 1-1.

That, in turn, allowed one of the Czech Republic or Switzerland to take an early lead in their group, which the former did. Jaroslav Silhavy’s men took the lead just 11 minutes in through Jan Kuchta, who capitalized on a defensive error to turn the ball in at the back post.

However, the Swiss were level before the interval courtesy of Noah Okafor’s thunderous finish from close range; the attacker collected the loose ball inside the box and smashed it in off the underside of the crossbar.

Switzerland conceded another calamitous goal in the 58th minute, with the ball taking a huge deflection off Djibril Sow on its way past Yann Sommer. The Czechs held onto their narrow lead to see out the win.