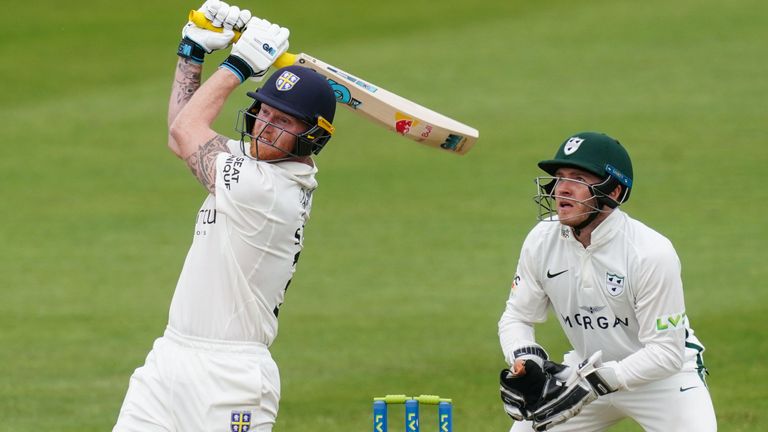 Making his return to first-class cricket for Durham, Ben Stokes lit up the Division 2 County Championship game against Worcestershire with a record 17 sixes in his explosive innings for the club on May 6. The aggressive left-hander went on a rampage and ended with an eye-catching 161 off just 88 balls.

Walking into bat with Durham well placed at 360 for four in their first-innings, the Englishman batted with the utmost freedom and took the game away from Worcestershire at their home ground at New Road with one of the most brutal assaults you will see.

At one point in his tremendous knock, Stokes blasted a jaw-dropping eight sixes in a space of just ten balls, including a stellar 34-run over against Josh Baker.

The opposition left-arm spinner was left to rue his misfortunate having to bowl to the in-form England allrounder as he was taken for five maximums on the bounce. His only cause of relief would’ve been avoiding being hit for six sixes, with the last ball of the over going for a four.

The fifth ball of Baker’s over brought up Stokes’ hundred, which he reached in just 64 deliveries. In no mood to offer Worcestershire any respite, Stokes blasted a further 61 runs through his innings off just 24 balls.

Stokes’ belligerence with bat in hand proved to be record-breaking as he ticked off a number of boxes next to his name. His 64-ball hundred is now the fastest-ever recorded for Durham.

In the process, he also became the man to hit most runs before the lunch interval in a County Championship game and only the fourth player ever to hit consecutive maximums in England’s premier domestic first-class competition.  The 17 sixes that Stokes finished with are the most scored by anyone in an English first-class innings.

The innings from the newly-appointed England Test captain was so good that it overshadowed the effort of Durham’s No.5 batter David Bedingham, who also struck 135 off 175 balls to help his team reach the impregnable 580/6 declared.