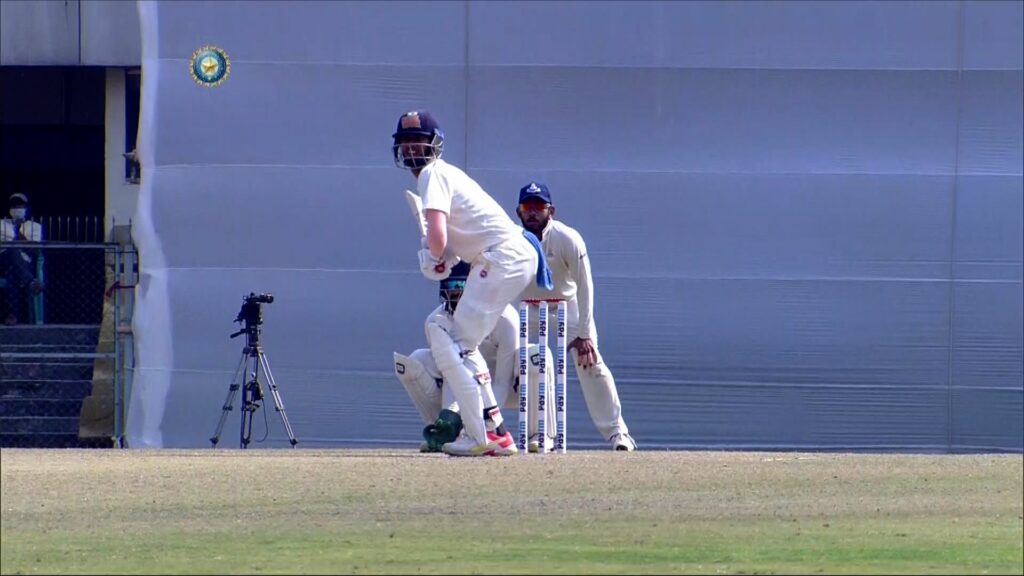 The first-round games in the much-awaited 2022 edition of the Ranji Trophy saw some interesting draws spread around a few notable outright victories. While the clashes between Delhi-Tamil Nadu and Saurashtra-Mumbai ended in draws, MP defeated Gujarat and Bengal overcame Baroda.

The Delhi-Tamil Nadu fixture saw TN take points out of a first-innings lead after a high-scoring bout in Guwahati. In the first half, debutant Yash Dhull (113) and middle-order bat Lalit Yadav’s (117) magnificent hundreds allowed Delhi to post 452.

Reducing TN to 296/6 at one stage, despite opener Kaushik Gandhi’s fifty (55) and a century (117) from Baba Indrajith (117), Delhi would’ve felt secure of ending with an advantage. But then Shahrukh Khan’s blistering assault took the game away from their grasp, as the powerhitter smashed an eye-catching 194 off 148 balls to put TN in the ascendancy.

With time running out, the match was always due to end with a draw, but there was enough space left on the final afternoon for Dhull to back up his century in the first essay with another hundred in the second.

The Saurashtra-Mumbai game played in Elite Group D was perhaps the most keenly followed game of the lot because of the presence of India veterans Cheteshwar Pujara and Ajinkya Rahane. Dropped from the Test squad, Rahane made a first-innings hundred (129) in support of Sarfaraz Khan’s marathon 275 that took Mumbai to a gigantic 544/7 declared.

Pujara was out for a first-ball duck as Saurashtra could respond to Mumbai’s huge total with just 222 of their own, with Mohit Avasthi (4/56) and Shams Mulani (4/55) proving to be the chief destroyers with the ball for Mumbai. Made to follow on, Saurashtra could still salvage a draw, thanks largely to Pujara’s resurgent 91 and opener Snell Patel’s 98.

The televised Gujarat-Madhya Pradesh encounter in Rajkot saw the visitors come out on top after the hosts collapsed to just 88 all out on the final day. Put into bat on the first morning, MP made 274 thanks to Rajat Patidar (54) and Shubham Sharma (92), who went ahead and made a critical hundred (103), almost singlehandedly keeping MP in the hunt despite a deficit of 57 runs.

Gujarat managed 331 on the board in their first-innings, with fifties from captain Priyank Panchal (52), Manprit Juneja (53), Het Patel (72) and Karan Patel (54). But they collapsed well short of the 204-run target after MP’s Kumar Kartikeya (5/34) ran through their line-up. In the first-innings, the old warhorse Ishwar Pandey (5/71) had ensured Gujarat didn’t go out of MP’s reach.

The Bengal-Baroda Elite Group B encounter was an interesting one as Bengal won at the end by 4 wickets despite posting only 88 runs in the first innings. They conceded a lead of 93 runs but came back to chased down a whopping 350 in the final innings. Captain Abhimanyu Easwaran (79) led them from the front, while lower-order bats Shahbaz Ahmed (71*) and Abishek Porel (53*) made critical contributions in the run-chase.

India hopeful Ishan Porel was the pick of the bowlers for Bengal (4/40 & 3/70) in a collective bowling effort to ensure that Baroda don’t run away with the game at any stage.

Rajasthan clinched victory over Andhra, while Karnataka played out a draw with Railways. Uttarakhand and Jammu and Kashmir won their respective fixtures against Services and Puducherry, while Kerala defeated Meghalaya.