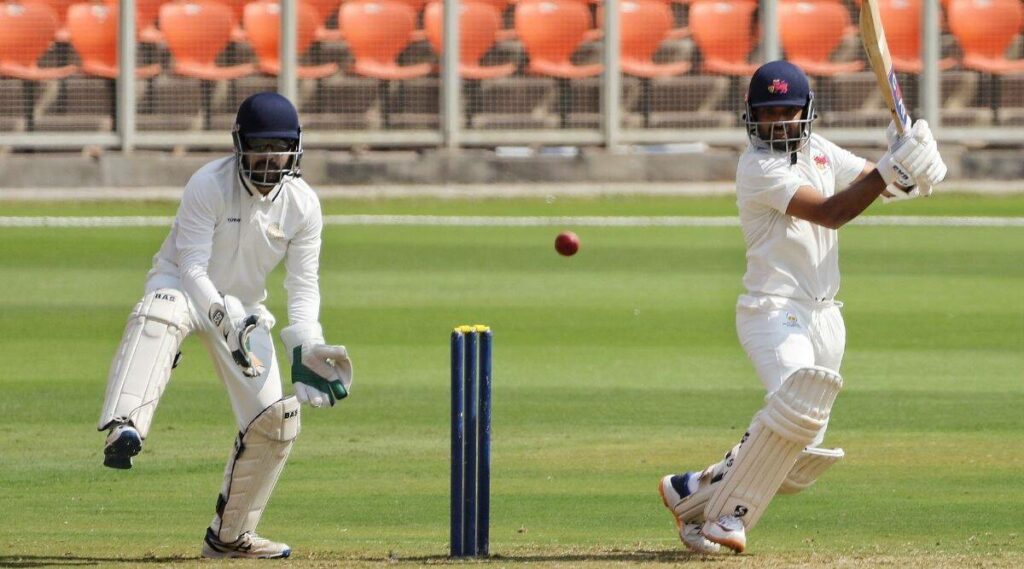 Ajinkya Rahane made a commanding hundred upon his return to first-class cricket for Mumbai as the Ranji Trophy resumed on February 17 after a gap of two years.

The veteran Indian batter, whose spot in the Test team has been under scrutiny, showcased that he is still too good for an Indian first-class attack, compiling a much-needed century versus defending champions Saurashtra.

Walking into bat with Mumbai two for 22, which later became three for 44, Rahane showcased his class by taking the game back to the opposition and struck an unbeaten 108 off 250 balls at the close of play in Ahmedabad.

At the other end, in-form middle-order batter Sarfaraz Khan blasted a magnificent 121 off 219 to resurrect the Mumbai innings along with his senior partner and continue his great form from the 2019-20 season where he dominated attacks.

Rahane’s century would’ve been a relief for the player, whose place is considered up for grabs ahead of the forthcoming home series against Sri Lanka. Since the start of 2020, the right-hander averages only 24.08 across his 35 Test innings for India.

Expectations are that Rahane would dominate attacks through the league stage of the curtailed Ranji season despite the drop in his game at the Test level. Thus, the selectors’ task will be to assess his runs accordingly when they meet to pick the side for the SL series.

The home series against the Lankan Lions is being considered an ideal opportunity for India to press the transition button and give the likes of Hanuma Vihari, Shubman Gill, Shreyas Iyer the senior roles.

Speaking of Vihari, the solid right-hand batter also made an impressive return to first-class cricket, making a half-century (59 off 134 balls) for Hyderabad against Chandigarh in Elite Group F.

Vihari, who batted superbly during the ‘A’ tour of South Africa but played only one Test in the Gandhi-Mandela Trophy, will be looking to finally break the door open and cement his place in the side. Potentially at No.3, if the selectors choose to move past the other struggling middle-order veteran Cheteshwar Pujara.

India being never short of batting talent, the selectors have the luxury to spread the net wide. And one encouraging example of the same came in Delhi’s first-round fixture versus Tamil Nadu, where India’s recent U-19 World Cup-winning skipper Yash Dhull scored a century on his first-class debut.

Opening the innings, the 19-year-old made a highly impressive 113 off 150 deliveries, including 18 fours. The right-hander made a smooth transition to the first-class game via an innings that shall boost his confidence for the rest of the Ranji season. Dhull warming up well against a Ranji attack was a huge win for India’s junior cricket set-up.

Another player from the same U-19 batch that achieved glory in the Caribbean, Raj Bawa, also made early impressions for Chandigarh against Hyderabad. The right-arm seamer bowled to Vihari & co and came up with notable figures of two for 43 off his 15 overs.

In a televised fixture in Rajkot, the Gujarat-Madhya Pradesh first-round game took an interesting turn after the use of the second new ball on Day 1. MP, who were pretty settled at 233/4 thanks to a watchful 92 from Shubham Sharma, collapsed to end 235/7 at the close of play.

Arzan Nagwaswalla, who went with the Indian Test side as reserve pacer for the tour of UK last year, was the pick of the bowlers for Gujarat with figures of three for 50.