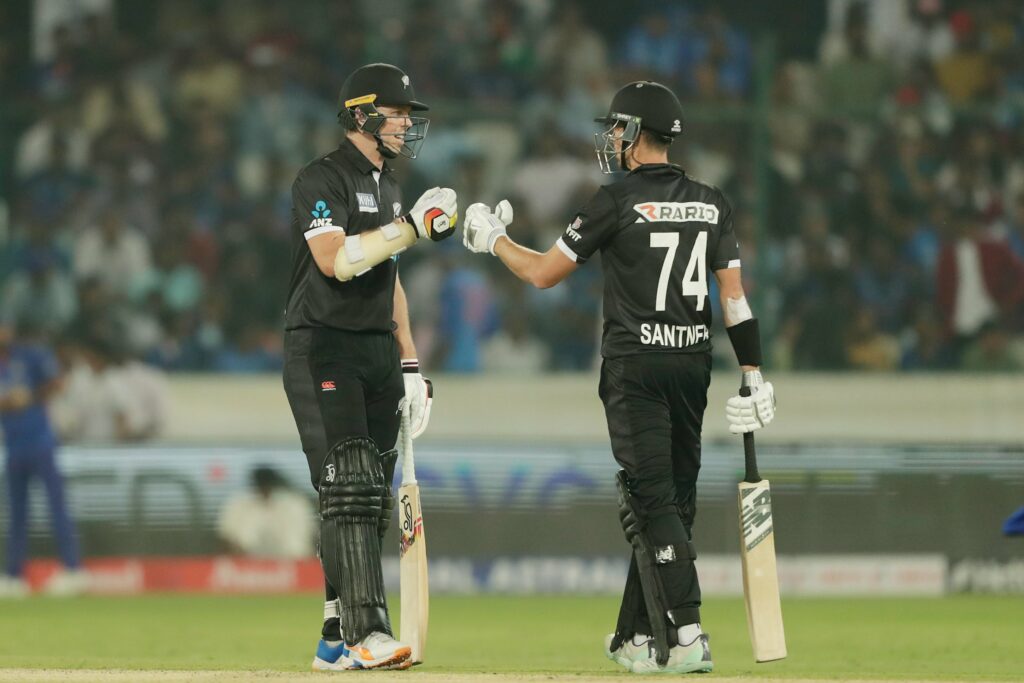 Michael Bracewell put on a stunning display as he smashed 140 off just 78 balls in the first ODI against India in Hyderabad. It was the left-hander’s second ODI hundred and he has now equalled MS Dhoni’s record of scoring more than one hundred in ODI cricket, batting at No. 7 or lower.

Bracewell lit up the Rajiv Gandhi International Stadium in Hyderabad with his scintillating stroke play. The left-hander who also bowls off-spin smoked a fine 140 which came in a mere 78 deliveries. His knock saw his smash 12 fours and 10 sixes.

When Bracewell walked out to bat at No. 7, the Kiwis’ score read 110/5. It soon turned into 131/6 when skipper Tom Latham was dismissed. In their last 20 overs, the side still needed 216 runs with just four wickets in hand.  The Indian bowlers had put up a solid show and were very disciplined.

However, that did not matter as Bracewell took charge and shifted the entire momentum of the game. In company of Mitchell Santner who played the perfect second fiddle, Bracewell stormed his way to a 31-ball fifty first. He kept finding the boundaries to keep New Zealand in the hunt. In no time, he notched up his second ODI ton, which came in just 57 balls.

It was the third-fastest hundred by a New Zealand player in ODI cricket. Despite losing wickets at the other end, Bracewell kept going and took the game to the final over. With 20 needed, he hit a six off the very first ball but was out LBW to a yorker from Shardul Thakur. The Kiwis fell agonisingly short (12 runs) and Bracewell’s stunning 140 went in vain. He hit 12 fours and 10 sixes in his 78-ball knock.

His first ton came against Ireland which was from a similar scenario and in that match, he took New Zealand over the line. He walked out to bat at 120/5 when the Blackcaps were chasing 301 in Dublin.

They were even reduced to 217/8 in the 43rd over. But Bracewell stood tall and smacked an unbeaten 127 off 82 balls (10 fours and seven sixes) to take New Zealand home with one ball to spare and one wicket in hand.

International
‘An abuse to domestic cricket’ – Venkatesh Prasad slams selectors for omitting Sarfaraz from India squad
January 18, 2023
International
‘Respect him now, tomorrow when you are the captain, you won’t get respect from your team’ – Shastri’s advice to Kohli when he wanted India’s limited overs captaincy from MS Dhoni
January 14, 2023
International
New Zealand’s Henry ruled out of ODIs against Pakistan & India; Boult to miss England Tests
January 8, 2023