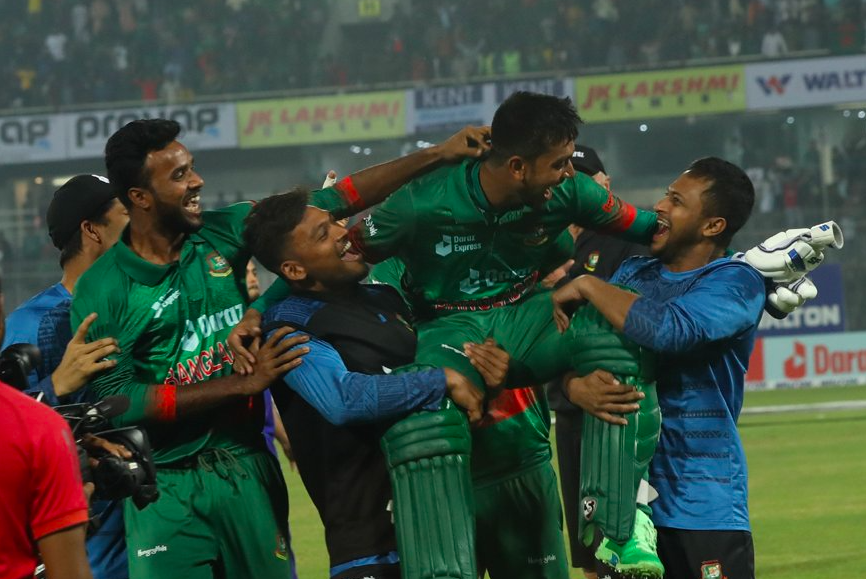 Bangladesh pulled off a heist with a record tenth wicket partnership in a low-scoring thriller against India in the first ODI in Dhaka on Sunday. Mehidy Hasan’s rearguard knock of 38 not out and a stoic effort from No.11 Mustafizur Rahman (10*) in a game-changing 51-run partnership did the trick for the hosts in a one-wicket triumph for the memories.

Left in a big strife at 136/9, chasing an otherwise modest target of 187, the hosts propelled through on the back of an excellent partnership that saw Mehidy farm the strike amidst few calculative risks that paid off while Rahman at the other end played his part by keeping the opposition attack at bay whenever he got strike.

It didn’t help that India failed to retain their consistency and control shown for the first 40 overs of the defence and also made multiple errors on the field, including a catch dropped by standing wicketkeeper KL Rahul off Mehidy’s miscued big hit.

That would pain the Indians a lot as they failed to pounce on the opportunity to resurrect ground and go 1-0 up despite an insipid batting effort in the first half of the game. The Bangladeshis were equally brittle and unconvincing with their batting performance outside Mehidy, with stand-in skipper Litton Das’ 41 being their top score for the chase.

Ultimately, it was a top quality bowling effort on a dry surface that helped Bangladesh paper over their batting struggles to come out victorious. The charge as usual at home was led by their spin duo of Shakib Al Hasan and Mehidy, who covered 20 overs with significant ease to put the tourists under immense pressure.

Mehidy bowled with strong control and precision to finish with figures of 1/43 off his 10 overs. But Shakib was the one who hogged the limelight with a spectacular five-fer (5/36), where he turned the ball marginally but just enough from the line outside off stump to make life extremely tough for the Indian middle-order.

The pressure exerted by the Mehidy-Shakib duo allowed fast-bowler Ebadot Hossain to also get amongst the wickets as the travellers were forced to try and hit him off. He finished with figures of 4 for 47.

India should be really disappointed with the way they batted in an innings that reinforced their longstanding spin issues in white-ball cricket. The much-vaunted top-order of Shikhar Dhawan (7), Rohit Sharma (27) and Virat Kohli (9) never quite got going, which made it tougher for the middle-order men with Shakib and co. holding the guns high.

Despite that, KL Rahul took to the game with great clarity and skill under pressure to produce an exceptional knock of 73 off 70 deliveries, including 5 fours and 4 sixes. On a surface where no specialist batter found it easy to hit through the line, he went at over a run-a-ball in what remains an enigma of a player, who, however, seems to be retaining a pattern to his career, where the clarity of situation and role seem to get the best out of him.

Rahul was India’s only positive with the bat and one basic reason why they could reach a position of strength during the second half at one point, with Mohammed Siraj (3/32) and Washington Sundar (2/17) backing his performance up with a quality effort themselves. Even Deepak Chahar (1/32) bowled well until the end-overs frenzy that seemed to have gotten the better of his control.