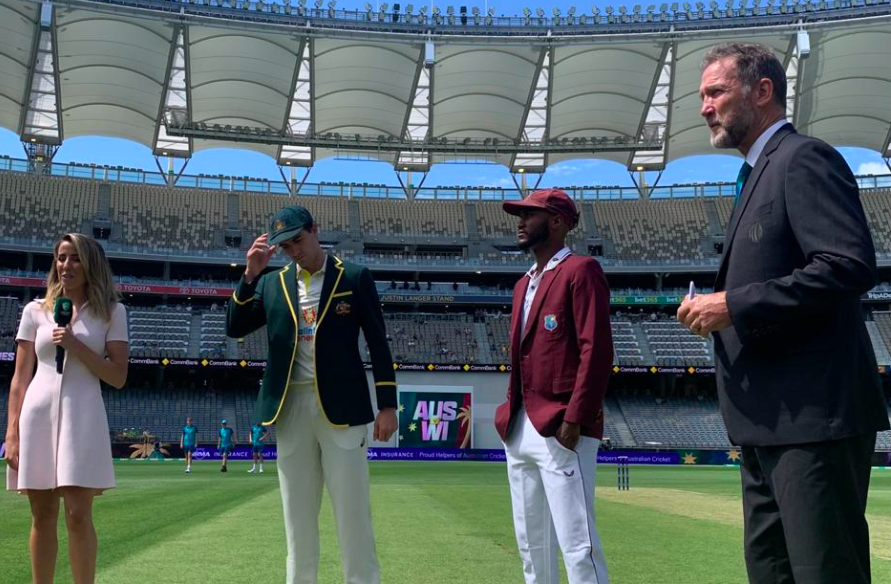 The Aussies progressively extended their dominance over the Windies on the first day of the opening Test of the two-match series at the Optus Stadium on Thursday, with Marnus Labuschagne leading the way with his eight Test hundred. The hosts were strongly placed at 293/2 at stumps, after skipper Pat Cummins opted to bat earlier in the day.

Jayden Seales had David Warner inside edge one onto his stumps immediately after the left-hander had nailed a pull shot during the fourth over of the day. West Indies quick challenged Labuschagne with their short-bowling tactics and had the right-hander and opener Usman Khawaja in control for a major part of the opening session, with both batters finding the occasional boundaries.

It was all Australlia thereafter, with Khawaja (65) adding 142 with Labuschagne, before falling to Kyle Mayers. Labuschagne, however, carried on to add another century stand with Steve Smith (59*) to extend Australia’s ascendancy.

The pair added 131 runs in mere 33 overs in the final session, and barring a failed DRS and a few plays and misses during the back end, were the few bright spots for the visitors on a day of hard toil. Debutant Tagenarine Chanderpaul misjudged an uppercut from Labuschagne at deep point, and failed to get to the ball when the batter was on 136 during the 84th over.

Labushagne had stuck 16 fours and a six, while Smith managed seven fours by the end of day’s play.

“I certainly looked at a lot of that stuff from last summer. It’s feeling alright. I’ve certainly felt better. But it’s nice to be scoring runs when you’re not absolutely feeling 100%. Certainly my stance is probably more closed off I think from where it was last summer,”

Labuschagne said after the game.