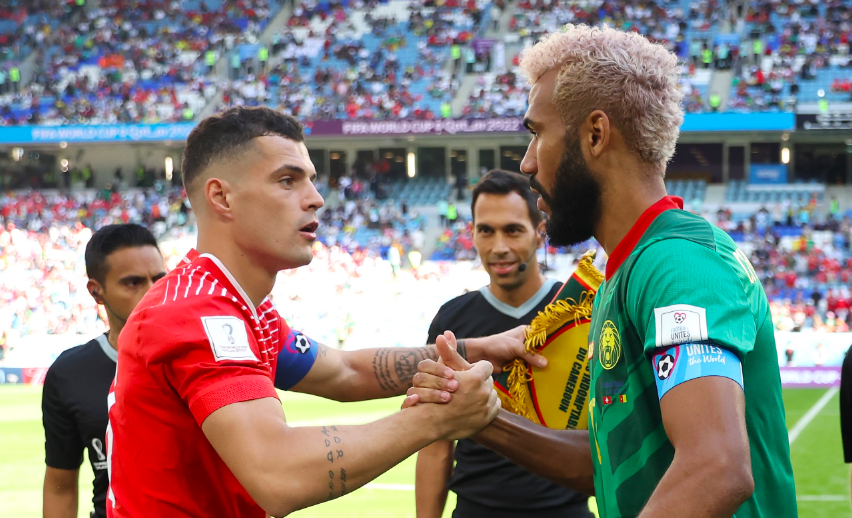 Native of Cameroon, Switzerland striker Breel Embolo scored the only goal in a 1-0 win for his side but refused to celebrate against his country of birth. Murat Yakin’s men have begun their World Cup campaign on the front foot following their victory in Group G.

Embolo’s goal at the Al Janoub Stadium in Al Wakrah became the biggest talking point of the match and for obvious reasons. The 25-year-old was born in Cameroon’s capital Yaounde but was raised in Basel, Switzerland. Having received citizenship from Switzerland in 2014, Embolo is now representing the European nation in his second World Cup campaign.

The AS Monaco striker was on hand to round off a wonderful and fluid move from Switzerland three minutes after the half-time restart. Embolo found the back of the net from Xherdan Shaqiri’s low cutback but refused to celebrate against the country of his birth and given his connection and familial ties to the African nation.

Former Liverpool attacker Xherdan Shaqiri has been directly involved in exactly half of Switzerland’s 24 goals across their last four appearances at major tournaments.

Cameroon, who have spent the last 20 years and five editions without a win in the World Cup, dominated proceedings in the first half. They missed the bulk of their chances and were left to regret it in the second half after Embolo got on the scoresheet.

Cameroon head coach Rigobert Song only had words of praise for match-winner Embolo, telling reporters at the Al Janoub Stadium:

“He is my little brother. We often speak to each other on the phone and I wanted to congratulate him,” he continued.

Meanwhile, Group H teams Uruguay and South Korea played out a gritty, goalless draw at the Education City Stadium in Al Rayyan. Diego Godin and Fede Valverde both struck the woodwork, but there was little else of note.