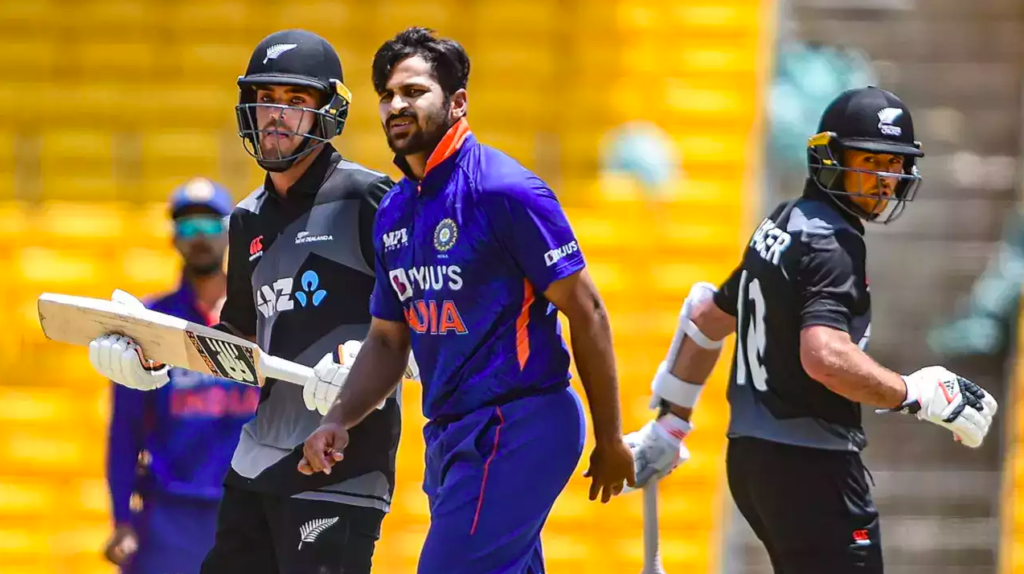 The two pacers took a combined seven wickets as the opposition scored a paltry 167.

The Indian Colts flexed their muscles against the New Zealand A side as they comfortably posted a seven-wicket win with more than 18 overs to spare. Indian pace-bowling duo Shardul Thakur and Kuldeep Sen ripped through the Kiwis’ top order before they were met with some resistance courtesy of Michael Rippon.

Rippon’s fighting knock could not do much for the NZ junior side as they folded for a paltry 167 before the Indians knocked away those runs with plenty of time to spare. Ruturaj Gaikwad and Rajat Patidar were particularly impressive as India romped home to a 1-0 lead in the three-match series.

Sanju Samson won the toss and decided to field first on a Chennai surface that looked like it would offer something for the bowlers. That decision turned out to be the right one as Thakur and Sen rattled the New Zealand A top order, despite the openers showing positive intent early on.

The openers’ dismissals unbarred the floodgates as the seamers wreaked havoc, reducing NZ to 27/5 within the first eight overs. Things would not get any better for the Black Caps as they stared down the barrel at 74/8, before Rippon and off-spinner Joe Walker attempted somewhat of a rebuild, to reasonable success.

The two added 89 for the ninth wicket as Rippon scored a gritty half-century. However, the duo’s hard work was soon undone as Patidar ran Walker out, soon after which Rippon also headed back into the pavilion, setting India a 168-run target.

In response, the Indian innings started off with a very uncharacteristic knock from Prithvi Shaw, who could not seem to get his rhythm going, as he fell for a 24-ball 17. Gaikwad was in control, setting up a 56-run stand with Rahul Tripathi and getting 41 runs in the process. Gaikwad and Tripathi both headed back into the pavilion in quick succession before Samson and Patidar knocked off the remaining runs in a nonchalant fashion, as India A won by seven wickets with more than 100 balls to spare.