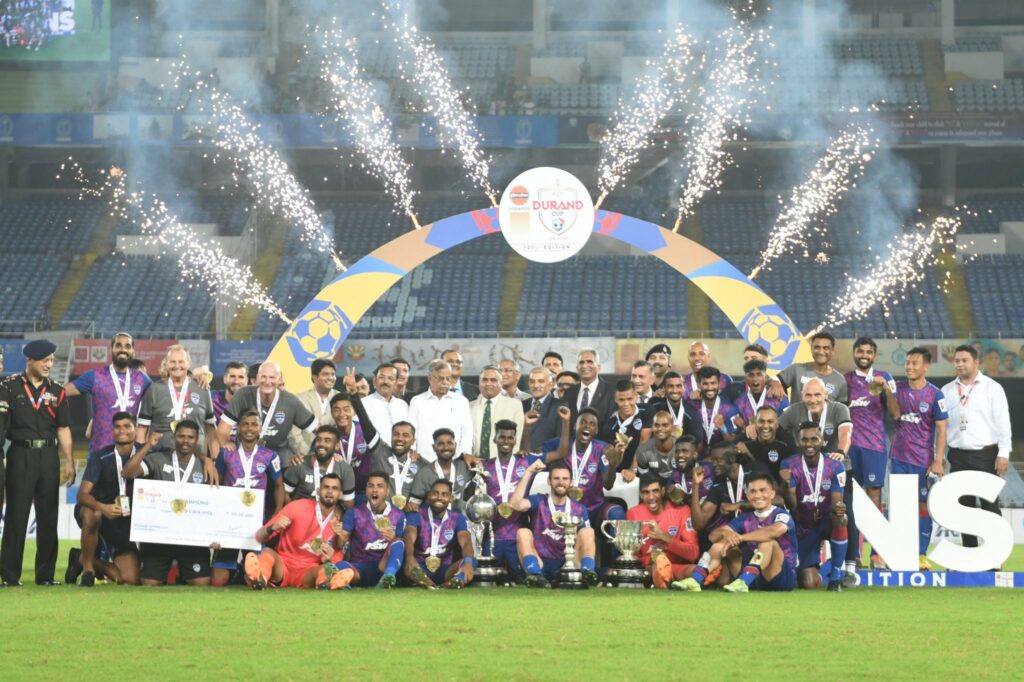 Bengaluru FC and their talisman Sunil Chhetri won the club’s first Durand Cup with a closely-fought 2-1 victory over Mumbai City at the Vivekananda Yuba Bharati Krirangan in Kolkata on 18th September. Sivasakthi and Alan Costa scored the two goals for the Blues.

The 131st edition of the Durand Cup, the oldest existing club football tournament in Asia, has now come to an end with Indian Super League giants Bengaluru FC staving off interest from Mumbai City to win the final with a narrow 2-1 scoreline.

Sivasakthi emerged as the unlikely hero for the West Block Blues, while Costa also got on the scoresheet. Even though Apuia Ralte found the back of the net for City, it proved to be nothing more than a consolation.

While MCFC did find themselves with an interesting dead-ball opportunity through a close free-kick early on in the game, it was Bengaluru who got their noses ahead as early as 10 minutes into the contest through Sivasakthi, who scored his fifth goal of the campaign.

A long ball from Jovanovic caused all kinds of problems for the Bengaluru defence. Mourtada Fall failed to judge the bounce, and Sivasakthi capitalised on the opportunity with a smart dink over the keeper to put his side ahead.

The first chance for the Islanders fell to Lallianzuala Chhangte, who failed to restore parity. However, they got back to level-pegging at the half-hour mark after Sandesh Jhingan gave away a dangerous free-kick. Ahmed Jahouh played on Greg Stewart, who went on one of his runs and took a left-footed grounder towards goal, which Gurpreet fended off.

Apuia was at hand, and tapped home the rebound with ease. Bengaluru had a glorious opportunity to restore their lead when Roy Krishna got the end of a glorious rebound off Roashan Singh’s corner, but Chhangte ended up making a terrific goal-line clearance.

The second half also carried much of the same intensity as the first half of the contest. Bengaluru FC found themselves leading by a goal again when Costa headed home from Chhetri’s corner aimed at the near post.

Chances fell for both the sides in the remainder of the contest, but neither of them could convert it into the back of the net, and thus, Bengaluru became Durand Cup champions for the first time in their history.