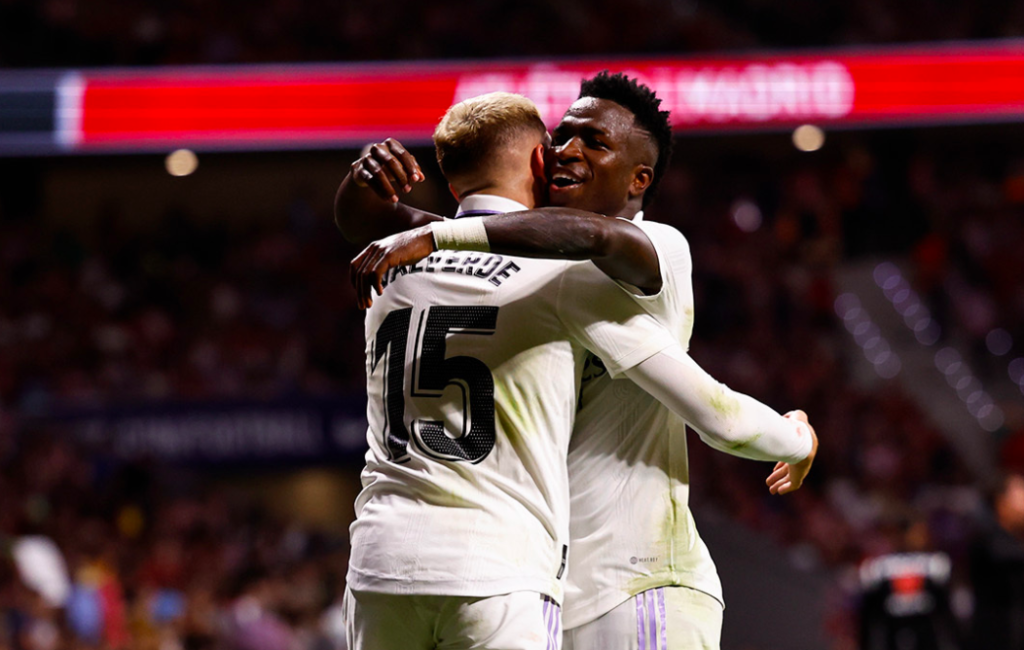 Los Blancos went six for six with a win over arch-rivals Atletico Madrid, Rodrygo Goes and Federico Valverde among the goalscorers. Mario Hermoso scored for the Rojiblancos but was sent off in stoppage time.

A daunting atmosphere at the Wanda Metropolitano could not deter Carlo Ancelotti’s side from recording their sixth win of the league campaign and ninth overall out of nine games they have played already this season.

Real had to withstand an early Atletico onslaught before launching ruthless attacks of their own. Luckily for the visitors, the home side was missing its shooting boots, and while the early attempts at Thibaut Courtois’s goal were close, they did not trouble the goalkeeper.

In comparison, Real’s first break came in the 18th minute when Federico Valverde broke the opposition lines with a driving run before playing the pass to Ferland Mendy, Mendy who slipped the ball to Rodrygo, and the Brazilian, who left it with Aurelien Tchouameni while continuing his run forward. Tchouameni clipped the ball over the defence, and the young attacker put his laces through it for the opening goal.

Thirty-six minutes in, Valverde doubled Real Madrid’s lead. The Uruguayan held his run at the back post as Vinicius drove forward and attempted to beat Jan Oblak at the opposite end. Vinicius’s shot bounced off the post but straight into the path of the midfielder, who tapped the ball into an empty net.

Hermoso pulled a goal back later on for Atletico Madrid from a corner but was shown a red card in the second-half stoppage time to wash away any hopes of a stunning comeback. 2-1, Real Madrid won and retook the lead at the top of the league table.

In other results, Julen Lopetegui’s stuttering Sevilla were held to a 1-1 draw by Unai Emery’s Villarreal – Alex Baena, the goalscorer for the Yellow Submarine after Oliver Torres had given the away side the lead. Meanwhile, Borja Iglesias celebrated his Spain call-up by scoring a brace in Real Betis’ 2-1 win over Girona.