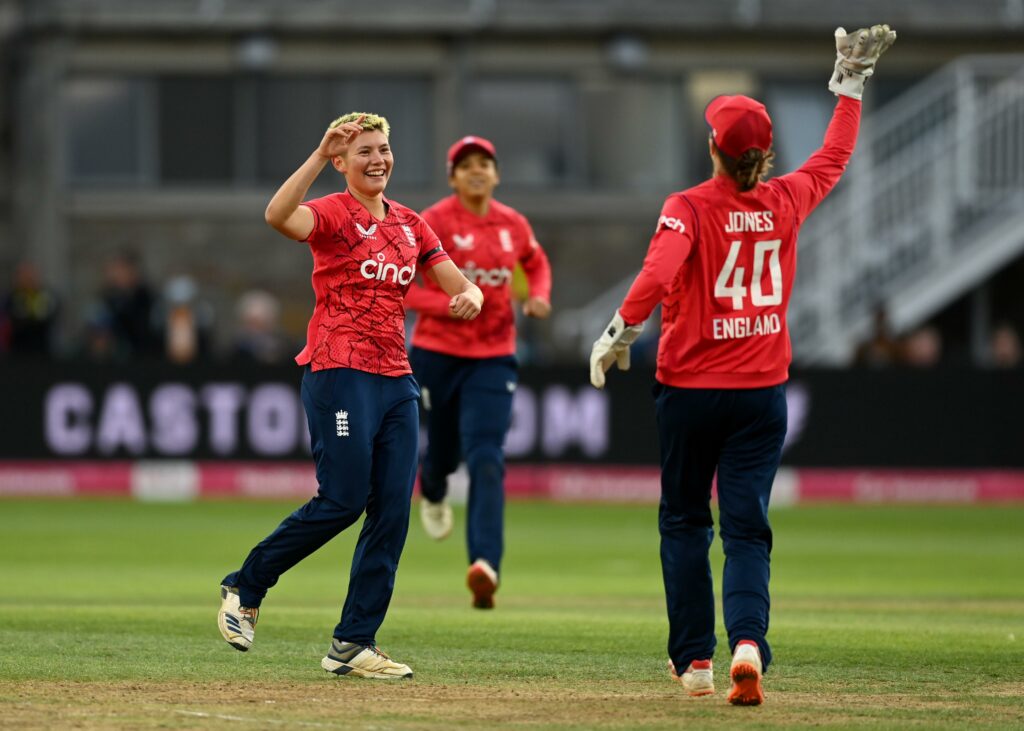 India’s impressive comeback win in the second T20I proved to be a false dawn for their fans as the side were hammered in the series decider by England on Thursday in Bristol. The hosts crushed the visitors with an impressive allround display, clinching the three-match series 2-1.

India’s over-dependence on a couple of key players, including elegant opening batter Smriti Mandhana, was exposed brutally by the England women’s side in a seven-wicket defeat that reinforced some of the team’s longstanding problems.

Mandhana, who was the star of the Indian victory in Derby with an unbeaten 79 off 53 balls, failed to continue her brilliant form with the bat in hand in Bristol, making 9 off 8 deliveries. Her failure dictated India’s fortunes for the night, as the rest of the Indian batting unit couldn’t withstand some quality English bowling and ended with a score of 122/8 in their 20 overs.

India’s top 6 had a horrible outing with the bat, reduced to 52 for 6 at one stage. From there, it required the tourists a run-a-ball 24 from Deepti Sharma and a quickfire 33 off 22 from Richa Ghosh just to make it past the 120-mark. Pooja Vastrakar also blazed her willow to a cameo of 19 from 11 deliveries.

England’s bowlers had a decisive presence in the game, with the young Sophie Ecclestone being the pick of the attack with figures of 3 for 25 off her 4 overs. Sarah Glenn also bowled a superb spell of 2 for 11. The Ecclestone-Glenn duo were ably supported by Bryony Smith (1/19) and Issy Wong (1/24) with their miserly spells, which gave India absolutely zero breathing space with bat in hand.

While the Indian batting unit struggled for flow and rhythm at the crease, England batters relished the luxury of a comfortable asking rate provided by their team’s bowlers. Sophia Dunkley was the top-scorer of the innings with a sedate 49 off 44 balls. She gave England a solid start alongside Dannie Wyatt, who missed out with bat in hand after 22 off 23.

No.3 Alice Capsey was in the mood to dominate the Indians through her 38 not out off 24 deliveries, featuring six fours. If there was a bigger total set for England to aim at, fans would’ve had the chance to soak in Capsey’s brilliance with the bat for a longer, more substantial knock. But she would be very pleased to have taken her side home with such ease and comfort.

Left-arm spinner Radha Yadav was India’s stand-out performer in the bowling department, delivering a restrictive spell of 1/14 off her 4 overs. Vastrakar backed her cameo in the first half with a miserly 1/16 off her 3-over spell. But lack of runs on the board was always going to haunt the Indian bowlers back, as their batters left the team needing a special performance on a good batting track to recover too much lost ground after an insipid effort.

The victory in Derby would’ve boosted India’s confidence but losses either side of that in Durham and Bristol were a sorry reminder of how far the side still has to go before they enter the T20 World Cup next year in South Africa. The runners-up of the tournament’s last edition in Australia will resume their prep via the Asia Cup T20I in October.