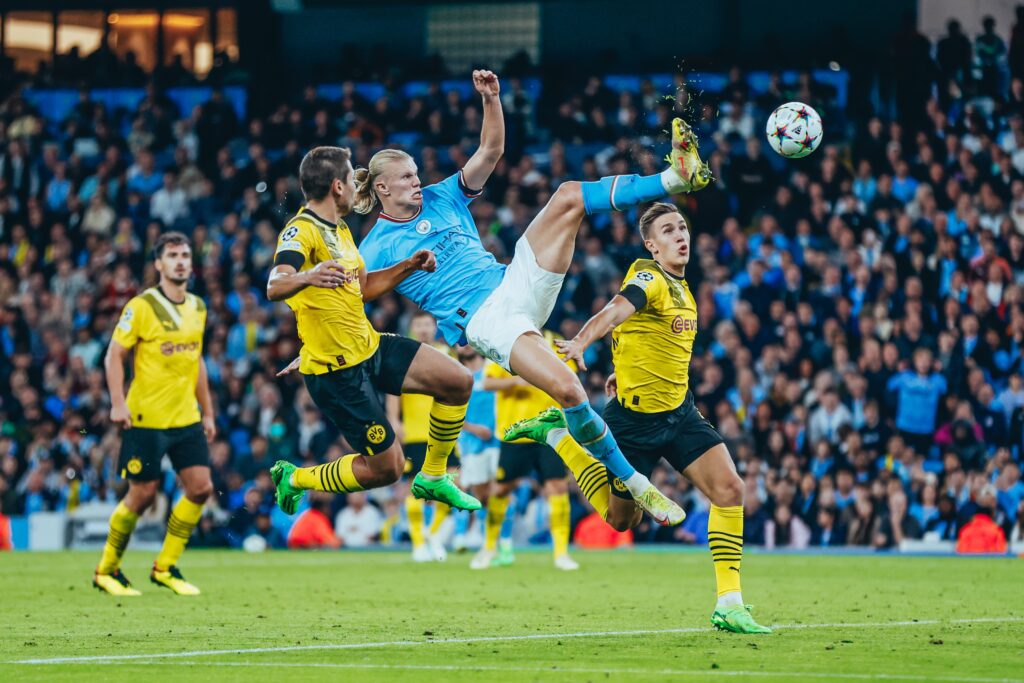 Erling Haaland and John Stones scored a stunner each in Manchester City’s 2-1 win over Borussia Dortmund, the former’s old team.

The Norwegian welcomed his former side to the Etihad, his new stomping ground, eager to show how quickly he has settled into his new surroundings. Instead, it was an Englishman on the other side who announced himself to the raucous stadium; Jude Bellingham gave Dortmund the lead in the 56th minute, glancing his header past Ederson off a Marco Reus cross.

City equalized through the unlikeliest of sources – John Stones. The English central defender picked the ball up in the right half-space, outside the box, and slammed his shot into the roof of the net – Alexander Meyer left with no chance.

Four minutes later, Haaland nudged City in front with an acrobatic finish at the end of an outside-of-the-boot cross from Joao Cancelo, showing Dortmund what they have been missing this season.

The Citizens held on to win the match. Meanwhile, in the other Group G game, Sevilla were held to a goalless draw by FC Copenhagen – the two sides with a point each after two matches.

In Group H, Juventus succumbed to a second successive loss, this time to SL Benfica. Arkadiusz Milik continued his fine form of late by heading the Bianconeri in front in the fourth minute, flicking the ball past the goalkeeper from a Leandro Paredes cross.

However, a foul by Fabio Miretti at the other end, inside the box, allowed Joao Mario to level the scores from the spot.

Benfica took the lead – one they would hold onto – in the 55th minute. David Neres put the ball past Mattia Perin after Goncalo Ramos saw his effort saved by the goalkeeper. The loss puts Juve six points off a knockout stage spot, albeit with four games to play.

Paris Saint-Germain, meanwhile, are poised for the round-of-16 after their convincing win over Maccabi Haifa. The Parisians fell behind to an early goal by Tjaronn Chery, but they retaliated through strikes on all three of their star attackers.

Lionel Messi poked the ball into the net from close range in the 37th minute, Kylian Mbappe finished a chance off superbly in the 69th, and Neymar confirmed the win with a simple strike two minutes from full-time.