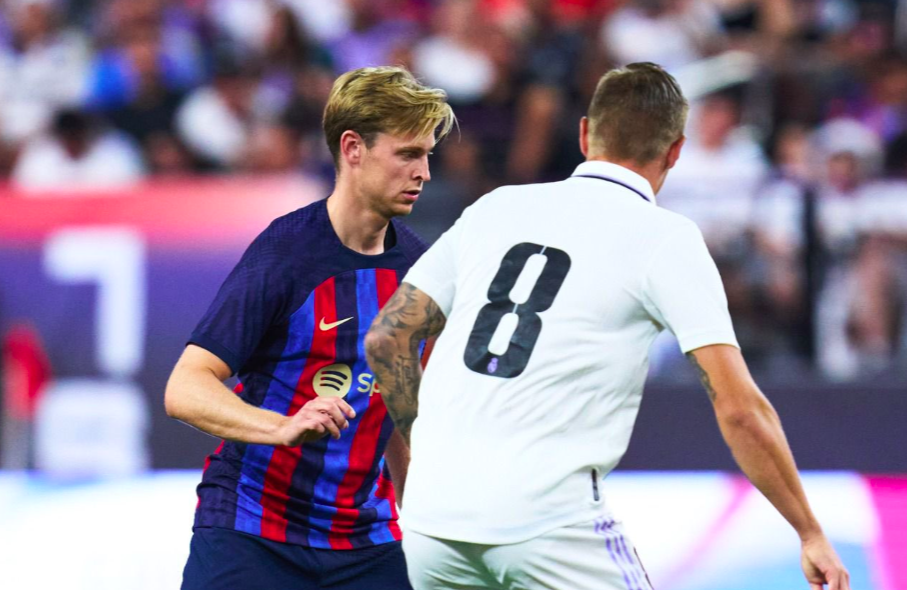 As per transfer journalist Gerard Romero, Chelsea are the most likely destination for Barcelona midfielder Frenkie de Jong. The Dutchman is expected to make a move to Stamford Bridge by the end of the ongoing transfer window.

The Dutchman has been the subject of interest throughout the summer from Manchester United, who even agreed to pay the Catalans a 75 million euro fee but fell short of convincing the player to complete a switch to Old Trafford. The Blues joined the race for the 25-year-old midfielder late but are leading it as things stand, reports Romero.

De Jong completed a transfer from AFC Ajax to Barcelona in the summer of 2019, six months after the two clubs agreed on a fee of 75 million euros. In his three years at Camp Nou, the Netherlands international has made 130 appearances for the Blaugrana and scored 13 goals.

Meanwhile, the Blues have had a second bid rejected by Leicester City for centre-back Wesley Fofana. Per Fabrizio Romano, an offer of 70 million pounds was reportedly deemed insufficient by the Foxes, but Chelsea are determined to sign the Frenchman this summer and are prepared to go as high as 85 million to strike an agreement.

Fofana joined Leicester in the summer of 2020 in a 36.5 million pounds deal and made 38 appearances for the Foxes in his debut season. The following year, he broke his leg during a pre-season friendly against Villarreal and missed almost the entire campaign due to the injury, returning only by mid-March to see out the run-in with 12 games under his belt by the end.

In terms of departures, Chelsea are close to selling left-wingback Marcos Alonso to Barcelona for a fee believed to be less than 10 million euros. Romano claims that only the final few details are preventing the transfer from being made official at the moment, with the Blues already securing a replacement in Marc Cucurella (Brighton) days earlier.

Should he complete a move to his native Spain in the coming days, Alonso will leave the club with 212 appearances and 29 goals across six years and a Premier League, a Champions League, and a Europa League title, among other trophies.