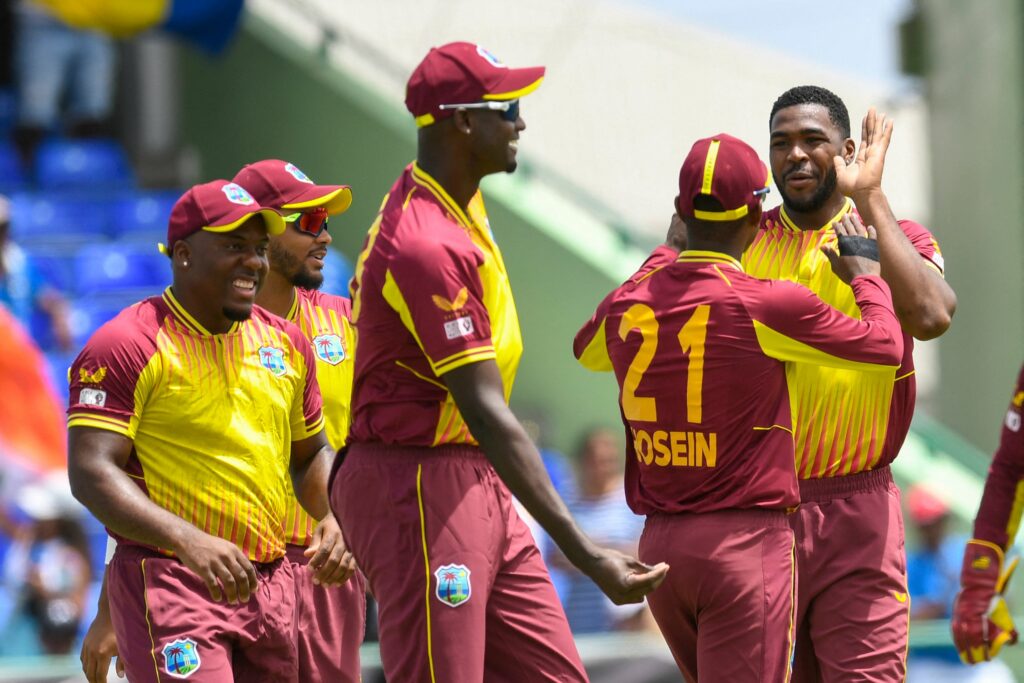 A delayed start to the second T20I due to the unusual luggage issue seems to have ruffled the West Indies less as they stitched an impressive win against India in St Kitts on August 1. The star of the show was their pacer Obed McCoy, whose magnificent 6 for 17 helped dismiss the Indians to a paltry 138 all out.

McCoy exposed India’s longstanding problem against left-arm fast-bowling and ran through their batting order. He was magnificent with the new ball, getting the dangerous Rohit Sharma out off the very first ball of the match. Rohit’s opening partner Suryakumar Yadav (11), too, went back soon as he was out caught off McCoy’s bowling in an attempt to revert the pressure.

Despite the early wickets, India kept a foot on the aggressor and tried their best to disturb the rhythm that McCoy & company had gained. Rishabh Pant played an innings that typified the approach and risk involved in it. The left-hander blasted his way to a 12-ball 24 but was undone by spinner Akeal Hosein.

Hardik Pandya and Ravindra Jadeja shared an interesting stand that went out of the league as far as India’s newfound aggressive ways are concerned. They scored 31 and 27 but went at a strike rate of 100 and 90, respectively.

The two players, known to provide the Indian innings with the final flourish, struggled to put the ball off the square. As did India’s designated end-overs hitter Dinesh Karthik, who couldn’t back his first T20I heroics for the game and made only 7 off 13 deliveries.

The Indian innings went nowhere after a point, they were dismissed without batting their entire quota of 20 overs. The credit for which shall go sizeably to McCoy, whose tall stature and the left-arm angle made life incredibly difficult for the Indians. Rallying alongside him were Hosein (1/22) and fellow quicks Alzarri Joseph (1/29) and Jason Holder (2/23).

The Windies got off to an impressive start in the second half. Despite opener Kyle Mayers (8) struggling at his end, they made 46 inside the powerplay thanks to Brandon King, who went on to produce a critical half-century to his team’s cause. King played a knock of substance, scoring 68 off 52 deliveries, which went a long way in helping WI keep the fighting Indian bowlers at bay.

The hosts had their own stutters with bat in hand, as almost their entire middle-order ghosted for the afternoon. Skipper Nicholas Pooran (14) and Shimron Hetmyer (6) failed to leave their imprints on the game, as did Rovman Powell (5). But wicketkeeper-batter Devon Thomas was up to the task and made a 19-ball 31, including a six and a four to close out the proceedings in the 20th overs.

Defending a target of only 139, the Indians brought the equation down to 10 off the last six balls. But they made a contentious decision to give the ball to the inexperienced Avesh Khan above veteran seamer Bhuvneshwar Kumar for the final over. Rohit later explained the move was borne out of the thought of giving Khan an opportunity to learn the trade by doing it.

But he failed to prosper on the day, bowling a no-ball at the start of the over before conceding a six and a four in a three-ball burst that put the scanner on his death-over abilities again.

For 19 overs, though, India kept themselves in the hunt, with left-arm pacer Arshdeep Singh (1/26) and allrounder Pandya (1/22) bowling restrictive spells and emerging as positives with the ball.