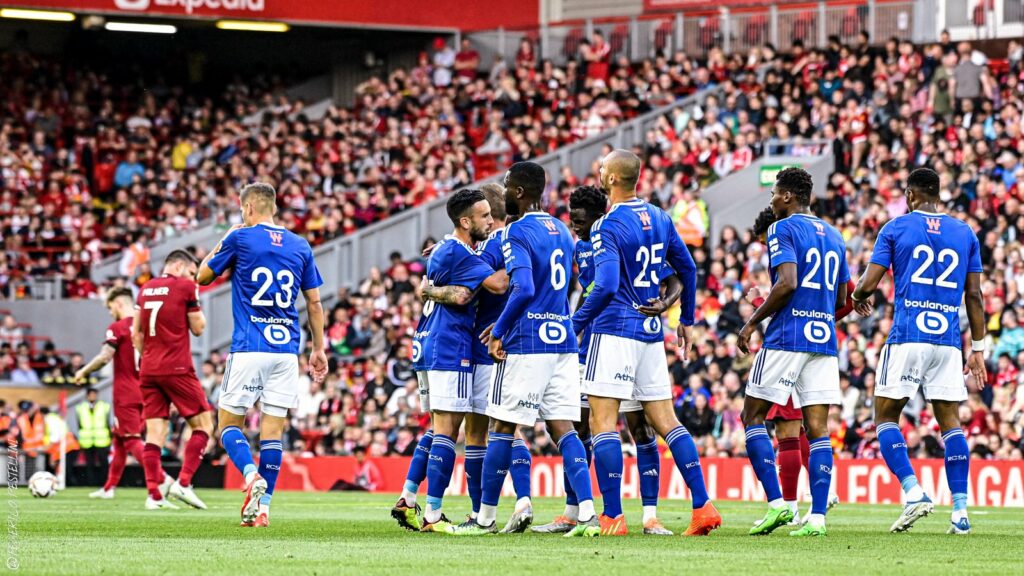 A day after the first team beat Manchester City 3-1 to lift the FA Community Shield, a much-changed Liverpool were thrashed 3-0 at home by Ligue 1 outfit RC Strasbourg. Jurgen Klopp gave a run out to first-teamers Ibrahima Konate, Joe Gomez, James Milner, Fabio Carvalho, and Harvey Elliott, while the rest of the line-up consisted of academy talents.

The French side took the lead in the fourth minute after a defensive lapse. Konate let the ball run through to the far post, where Adrien Thomasson stole it ahead of right-back Isaac Mabaya and lobbed it over the goalkeeper.

Carvalho hit the side netting at the other end shortly after. 14 minutes in, Habib Diallo doubled the visitors’ lead with a thumping effort from inside the box. Strasbourg went three up inside 21 minutes when Marvin Semaya bumped Milner off the ball on the right-wing, charged forward with it, and squared it to Thomasson, who completed his brace with a well-placed shot into the corner.

With their pre-season complete, Liverpool play Fulham on the opening weekend of the Premier League (Aug 6).

Elsewhere, Cristiano Ronaldo’s much-touted return ended after 45 minutes in Manchester United’s 1-1 draw against Rayo Vallecano at Old Trafford. The Portugal international had just returned to first-team training after missing the club’s entire pre-season tour of Asia, Australia, and Norway but was hooked off by the manager Erik ten Hag at the interval and was seen leaving the stadium before the full-time whistle.

Stand-in goalkeeper Tom Heaton was called into action within ten seconds after kick-off when a sweeping move by Rayo allowed Alvaro Garcia to run into space and shoot. An otherwise cagey first half gave way to the game’s first goal, which was scored by Amad Diallo – brought on in place of Ronaldo at half-time – from close range.

Nonetheless, Garcia scored shortly after – tapping in the rebound after Heaton had saved Isi Palazon’s effort – to ensure that the spoils were shared.

United will host Brighton and Hove Albion in their Premier League opener on August 7.