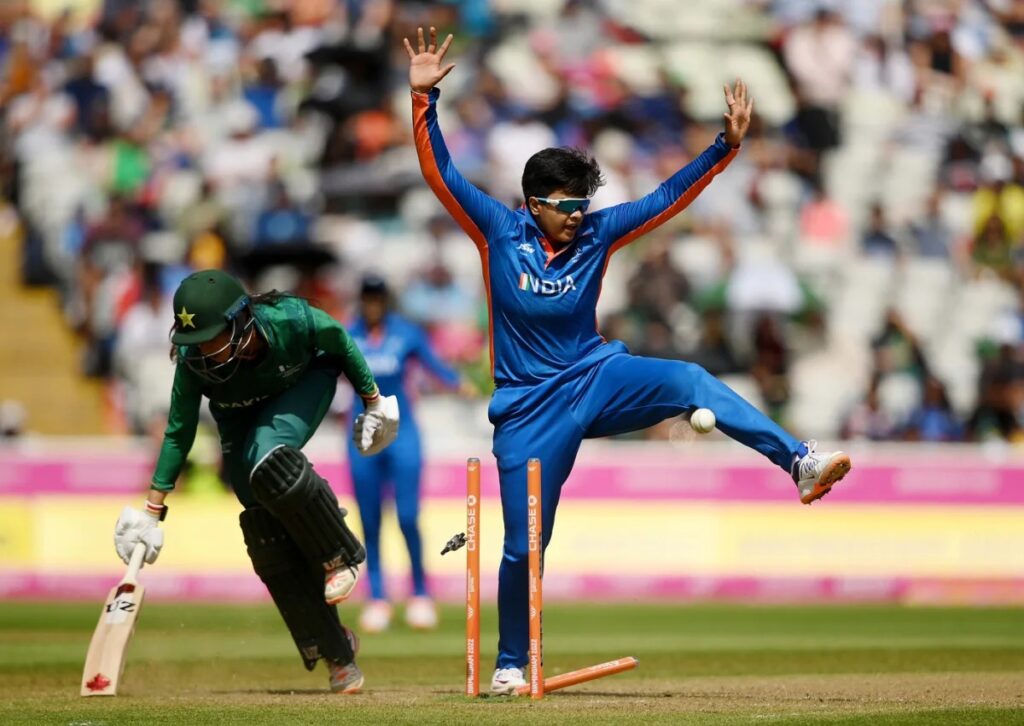 India defeated Pakistan comprehensively in a rain-marred 18-overs per side game in their second round Group A fixture of the women’s T20I event played at the Commonwealth Games 2022 on July 31. Harmanpreet Kaur & company dominated the neighbours towards an easy eight-wicket victory to return to winning ways.

After missing out on a wonderful opportunity to turn the tables on the Aussies, India had a more complete outing against Pakistan, dismissing their hapless Asian counterparts for only 99 runs in the first half before reaching home with over six overs left in the game.

Sneh Rana (2/15) and Radha Yadav (2/18) enjoyed their time out in the middle, as did Renuka Singh (1/20) with her tight spell. The trio offered zero respites to the Pakistani batters, who could never put the pressure back on the Indians.

In a sorry-looking scorecard, wicketkeeper-batter Muneeba Ali, with her sedate 32 off 30, was the only batter to make it into the twenties. The next highest score for the innings was 18 off 22 balls from Aliya Riaz.

India got off to a quickfire start again but not due to the presence of Shafali Verma at the top of the order. Verma mustered a cameo of 9-ball 16 before her wicket.

The upsurge in scoring right from the beginning came about because of a free-flowing knock from Smriti Mandhana. The elegant left-hander smashed her way to 63 not out off 42 deliveries and propelled her side through in the 12th over of the chase.

Mandhana, who looked like building onto something good before her untimely dismissal for 24 off 17 against the Australians, went on to produce a strong half-century that holds her well going deeper into the tournament.   Pakistan were hammered with the ball, too, with only Omaima Sohail (1/20) looking in any sort of control over the run-scoring.

In the other Group A encounter played in Edgbaston, the Aussies had the easiest of times to beat an inexperienced Barbados side. Enjoying the highs of their surprising win over Pakistan in the first round of group matches, the Barbadian women were brought down to earth by the Australians.

Asked to bat first by the reigning T20 World Cup champions, who were intent on finishing the game with as high a net run-rate boost as possible, Barbados could post only 64 runs off their 20 overs before being dismissed.

Only one of their batters – Hayley Matthews (18), the Windies international – entered the double digits. The rest collapsed like a pack of cards against inarguably the world’s best team. The gap in experience and quality was evident as the Barbadians couldn’t simply withstand the challenge presented to them.

Young spinner Alana King was outstanding with her four-wicket burst (4/8) that led the bowling charts for the Aussies. Tahlia McGrath (3/13) and Ashleigh Gardner (2/6) also played their part in running through the opposition.

An excellent bowling performance meant no pressure on the Aussie batters to keep the scoreboard ticking, but they challenged themselves to finish off the proceedings early. They lost opener Beth Mooney (2) cheaply at the start of the chase, but her partner Alyssa Healy (23*) and skipper Meg Lanning (36*) took control of things and enabled their side’s nine-wicket victory with almost 12 overs remaining.

Barbados’ only moment of happiness arrived when their seamer Shanika Bruce (1/7) dismissed the experienced Mooney.

With their successive wins against India and Barbados, Australia secured their place in the tournament semifinals. They still have a group game left versus the eliminated Pakistanis on August 3.  India will take on Barbados the same day to decide the second semifinalists from Group A.