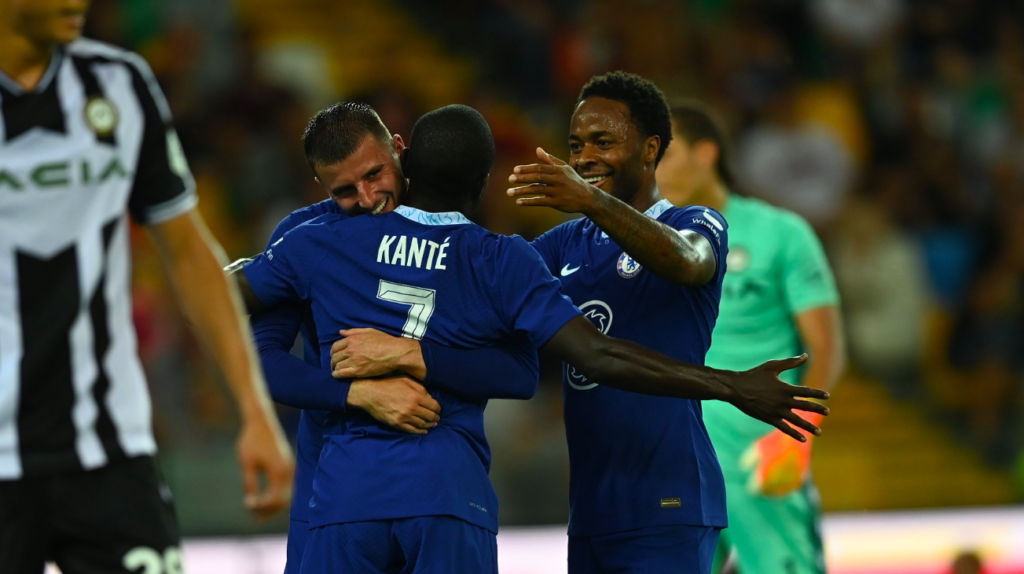 Putting a disappointing tour of the United States of America aside, Thomas Tuchel’s side defeated Udinese 3-1 to inject positivity into their pre-season campaign on the eve of the new season. Among the pluses was new signing Raheem Sterling scoring his first goal in the Chelsea blue, with N’Golo Kante and Mason Mount adding one each.

The Blues started strongly at the Dacia Arena, forcing Marco Silvestri into two good saves early on. However, there was nothing the goalkeeper could have done to stop Kante’s thunderbolt strike from nestling into the corner in the 20th minute, the Frenchman taking aim and scoring from outside the box after a darting run.

Thirty-seven minutes in, Sterling got on the scoresheet. The Englishman opened his body to receive a pass from Jorginho in his stride and waited for the custodian to go to the ground before attempting a lob over him. While the initial shot was saved by Silvestri, the ball bounced off Sterling into the net.

Gerard Deulofeu pulled a goal back for Udinese just before half-time, following up with a shot after Eduoard Mendy had saved Roberto Pereyra’s initial effort. Chelsea had to wait until the very end of the second half to seal the win, which came after Mount tapped home from a Callum Hudson-Odoi cross.

Chelsea meet Everton on the opening weekend of the 2022/23 Premier League – Everton, who beat Dynamo Kyiv 3-0 at home courtesy of a brace from new signing Dwight McNeil.

Another one of the Toffees’ new signings, James Tarkowski, played a crucial role in the game’s opener, his long ball from the halfway line headed past the goalkeeper by Dominic Calvert-Lewin.

But, the goal of the night came from McNeil, who, early in the second half, picked the ball up inside the opposition half and charged forward before unleashing a fierce, diagonal shot into the far corner. The 22-year-old, then, combined with summer arrival Ruben Vinagre to head in Everton’s third, marking a memorable debut with a brace.