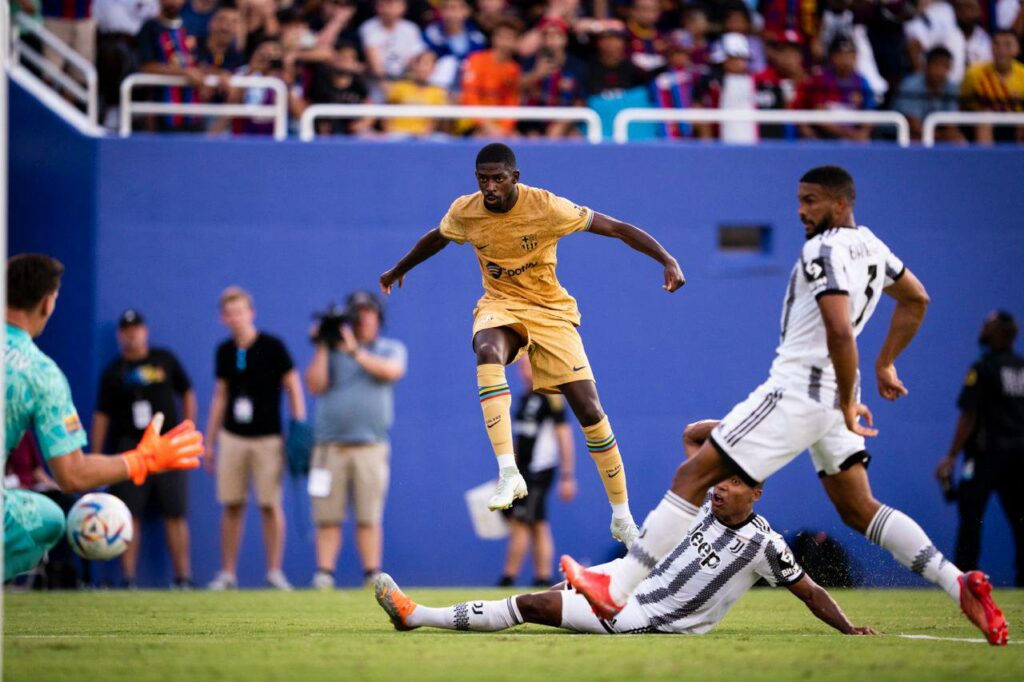 Ousmane Dembele, fresh from signing a new deal with FC Barcelona, scored twice in their latest pre-season friendly against Juventus in Dallas. The Bianconeri had a hero of their own on the night, with young Italian striker Moise Kean, whose future remains unsolved, bagging a double to level the tie.

The Frenchman opened the scoring in the 34th minute – a solo effort that brought those inside the Cotton Bowl to their feet in applause. He picked up the ball close to the touchline on the right wing and turned defenders inside and out, slaloming past them on his way to the penalty box, where, with a fierce swing of his right foot, he unleashed an unstoppable shot into the corner of the net.

Kean leveled the scores five minutes later with the simplest of finishes, the Italian timing his run to perfection to tap home a Juan Cuadrado cross from inside the box. Parity lasted two minutes, for Dembele scored again in a similar manner.

Far less of a smooth slalom, though, as this time around, the Frenchman caught the ball on a lucky break after a defender had blocked his way and curled it past the goalkeeper with his left foot. But the tie was to finish level after Kean bundled the ball home in the 51st minute, equalizing again for Juventus.

Meanwhile, in San Francisco, Real Madrid conceded late to Mexican side Club America in a game that finished 2-2. Henry Martin gave the Mexican giants the lead in the fifth minute, scoring from close range after he initially blocked a teammate’s effort on goal.

However, the in-form Karim Benzema brought Los Blancos back into it with a stunning effort; the Frenchman played a give-and-go with Marco Asensio on the edge of the box before curling his shot inside the far post.

Eden Hazard gave Carlo Ancelotti’s side the lead in the 55th minute from the spot after Lucas Vazquez was fouled inside the area. But, the game finished level after Alvaro Fidalgo, too, scored a penalty in the 82nd minute.