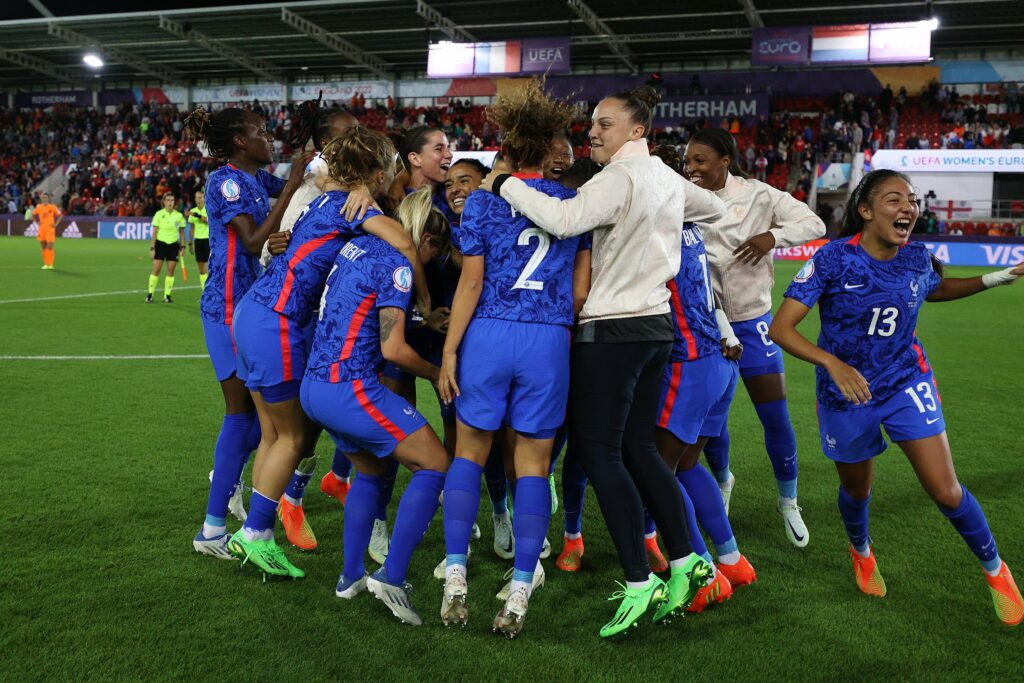 The France women’s team advanced to their first-ever European Championship semifinal, where they will face Germany, thanks to Eve Perisset’s penalty in extra time.

Perisset, who joined Chelsea from Bordeaux last month, converted a VAR-awarded spot-kick in the 102nd minute in Rotherham as Corinne Diacre’s side finally got past Dutch goalkeeper Daphne van Domselaar.

The French had lost in the quarter-finals of their previous five international tournaments. Les Bleues reached their maiden Euros semifinals, with only eight-time European champions Germany standing in their way of a place in the final. France has only once reached the semifinals of a major tournament. That was at the 2011 Women’s World Cup.

France were dominating right from the start as captain Wendie Renard headed wide, and Kadidiatou Diani surged into the area and had a shot saved by van Domselaar, who then did well to dive and push away Dominique Janssen’s sliced attempted clearance.

France’s other efforts by Charlotte Bilbault and Cascarino were dealt by van Domselaar, whilst Sandie Toletti blazed into the stand despite being in a good position, while Melvine Malard struck wide.

They then came the closest to capitalising on their pressure when Cascarino’s 27th-minute drive came back off the inside of the post with van Domselaar beaten. They were then stopped by Stefanie van der Gragt’s remarkable goal-line blocks a few minutes apart – Malard and Grace Geyoro the players denied.

After posing little of an attacking threat in the first half, the Netherlands had more success early in the second, with the returning Vivianne Miedema getting on the end of one corner but failing to direct her effort on goal, and van der Gragt meeting another with a header that Pauline Peyraud-Magnin gathered.

The defender was then on hand again at the other end to clear a Renard header, and the French captain saw another headed effort saved by a fine van Domselaar moments later.

France pushed for a winner in the closing stages of normal time, but Geyoro headed wide at the far post, and van Domselaar then saved a Cascarino shot and another Renard header.

Early in extra time, French substitute Selma Bacha fired over before Diani was brought down in the box by Janssen’s challenge. The incident was reviewed by VAR, with Croatian referee Ivana Martincic watching it back on the pitchside monitor before pointing to the spot, and Perisset stepped up to slam the ball past van Domselaar to give France their first lead.

As Diacre’s side threatened to add another goal in the second half of extra time, another substitute, Ouleymata Sarr, fired two efforts wide in quick succession.

France will face Germany in the second semifinal on July 27 at Stadium MK. On July 26, England will lock horns with Sweden at Bramall Lane.