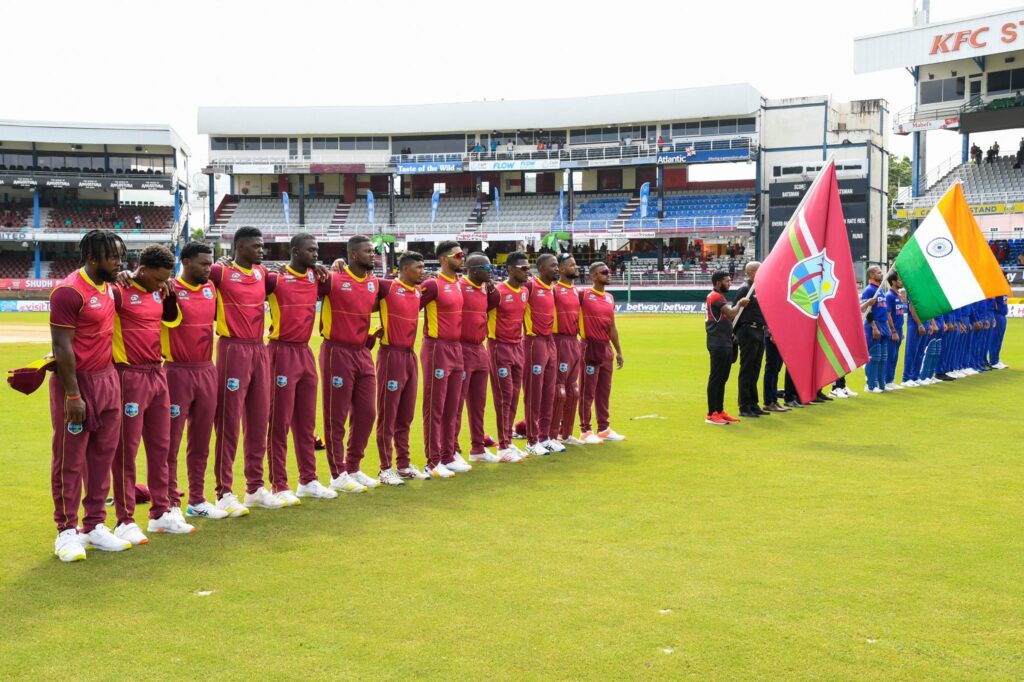 Away from the harrowing tracks in Guyana, a high-scoring thriller at the Queen’s Park Oval in Port of Spain in the first One-Day International between West Indies and India was a refreshing sight for viewers. The visitors came on top by just three runs in the end, going 1-0 up in the three-match series. The second match will take place at the same venue on July 24.

The first match saw India cruising towards a massive score with Shikhar Dhawan scoring 97 at the top of the order. Shubman Gill, playing his fourth ODI and first since December 2020, reminded everyone of his talent as eased his way to a stroke-filled 64 off 53. The opening duo added 119 runs in 17.4 overs.

Dhawan and Shreyas Iyer then piled on 94 runs for the second wicket. Iyer scored a well-made 54 while Dhawan missed out on his century by three runs. India were 225/2 in 35 overs and a total in excess of 350 looked very much on cards. But they lost their way as the Windies bowlers picked a quick few wickets. India managed to post 308 with some contribution from Deepak Hooda and Axar Patel.

West Indies lost Shai Hope early but Shamarh Brooks and Kyle Mayers put on an excellent partnership of 117 runs in 18.5 overs. Brooks scored 46 while Mayers smashed 75 off 68 but Shardul Thakur bagged both of them against the run of play. Brandon King took the Windies closer to the target with 54. The equation was 57 required off 33 balls when King was dismissed.

Akeal Hosein and Romario Shepherd, who smashed 32* and 39* respectively, had brought it down to 15 off the last over. Mohammed Siraj rose up to the occasion and delivered yorker after yorker in the final over to snatch the victory.

The Nicholas Pooran-led side has now lost seven ODIs on the trot and would be desperate to break the streak but the task won’t be as easy against a pretty strong Indian side.

Shikhar Dhawan has been one of the pillars of Indian batting in the fifty-over format in the last decade. The left-hand batter has amassed 6420 runs from 153 matches at an excellent average of 45 while striking at 93. He has 17 hundreds and 36 fifties to his name in ODI cricket. Dhawan was outstanding in the first game of the series, scoring 97 off 99 balls.

One of the top spinners in the game, Yuzvendra Chahal has been an integral member of India’s white-ball bowling attack. The leg-spinner has bagged 113 wickets from 65 ODIs at an average of 26.80 and economy of 5.19. Chahal has snared four or more wickets on six occasions, with best figures of 6/42. Chahal dismissed dangerous Rovman Powell and a set Brandon King in the last game.

Kyle Mayers kept India on the edge in the first ODI, smashing 75 off 68. He’s promising player, averaging 31 from 11 ODI innings with one hundred and a fifty. Mayers doesn’t have a great record in List A cricket but does possess an ability to make impact on the game. The left hand batter could be a key player in this fixture.

Gudakesh Motie is a skillful left arm spinner, who has made it to the West Indies team on the back of good domestic performance. He has only played four ODIs but has looked like he belongs at this level. He’s picked 8 wickets at 16.75 apiece and an economy of 3.65, including best figures of 4/23. Motie picked two important wickets of Dhawan and Iyer in the last game, triggering a collapse.

India’s dominance over the West Indies continued as they claimed their eighth successive win in ODIs in this rivalry. The head to head record clearly goes in India’s favour.

As for the squads, India have a power-packed batting line-up despite playing a second-string side. They have Dhawan, Gill, Hooda, Iyer, Deepak Hooda and Sanju Samson. The bowling attack comprises Siraj, Chahl, Thakur, Patel, and Prasidh Krishna.

West Indies returned to some batting form on a good wicket. Their batting line-up of Hope, Mayers, King, Pooran, and Brooks looks decent. Motie and Hosein did well but the bowling attack largely remains a concern.

Overall, India looks a much better side and will head into the second game as favourites. India should take an unassailable 2-0 lead.