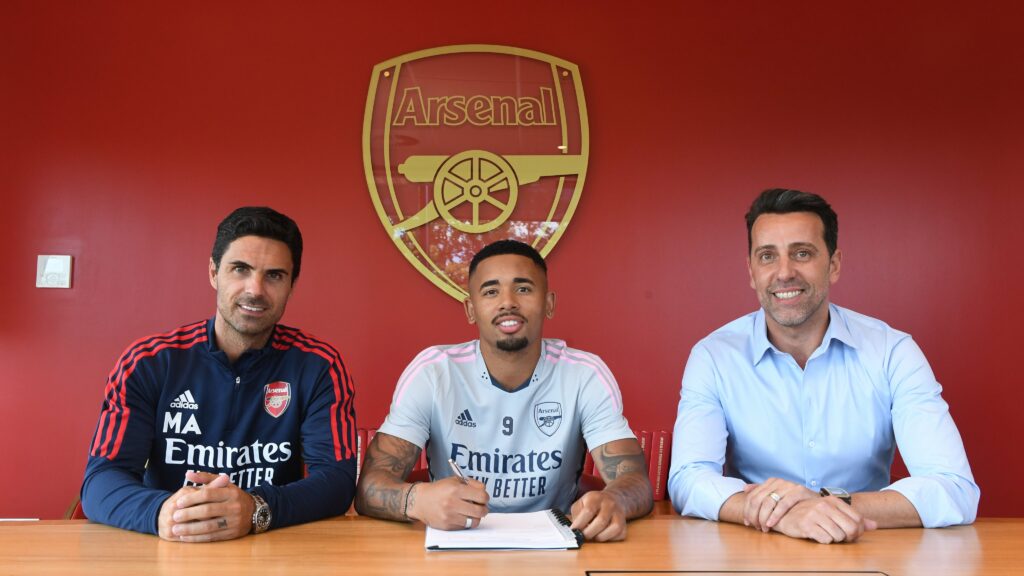 The Gunners have signed Gabriel Jesus from Manchester City in a big-money, long-term deal. The Brazilian replaces Alexandre Lacazette at the Emirates, who left the Gunners to join Lyon earlier in the window.

Arsenal have announced the signing of Jesus from Manchester City for an undisclosed fee – believed to be in the region of 45 million pounds – on Monday morning. The Brazilian leaves City after five-and-a-half years to sign a five-year contract with the Gunners, which will run until the end of the 2026/27 season. Jesus will striker Alexandre Lacazette in North London after the Frenchman left the club upon the expiration of his contract to sign for Lyon on a free transfer.

As per Fabrizio Romano, Arsenal faced competition from three clubs for Jesus until the weekend of June 26, but the Brazil international was firm in his choice to continue his career at the Emirates. In his first interview with the club, Jesus named former Arsenal great Thierry Henry and the stadium as factors that turned him towards the Gunners.

“I followed Arsenal when I was young because of Henry.”

“Obviously I didn’t follow too many European teams but when I saw some of the players that played here, I was like “wow, this club is big.”

When I played against Arsenal I was looking at the Emirates and it was a very good stadium, so I’m very excited to play here,”

Jesus has had previous experience playing under Mikel Arteta. The Spaniard learned his trade as a football manager at City under Pep Guardiola, where his path crossed with Jesus, if only for a brief period. In his sit-down with the club website, he was full of praise for his new manager.

“He helped me a lot. We would always stick together after the training sessions and do some finishing or something. He’s a very intelligent guy and was an amazing player, so if he knows something he can teach me or the young players,”

The player arrived in England in January 2017 in a 27 million pound deal from boyhood club Palmeiras. He flew off the blocks, scoring seven goals in his first ten league appearances. However, throughout his Manchester City career, the 25-year-old failed to displace Sergio Aguero as the preferred striker and was later deployed out wide under heavy rotation from Guardiola. He leaves the club with a record of 95 goals in 236 appearances.