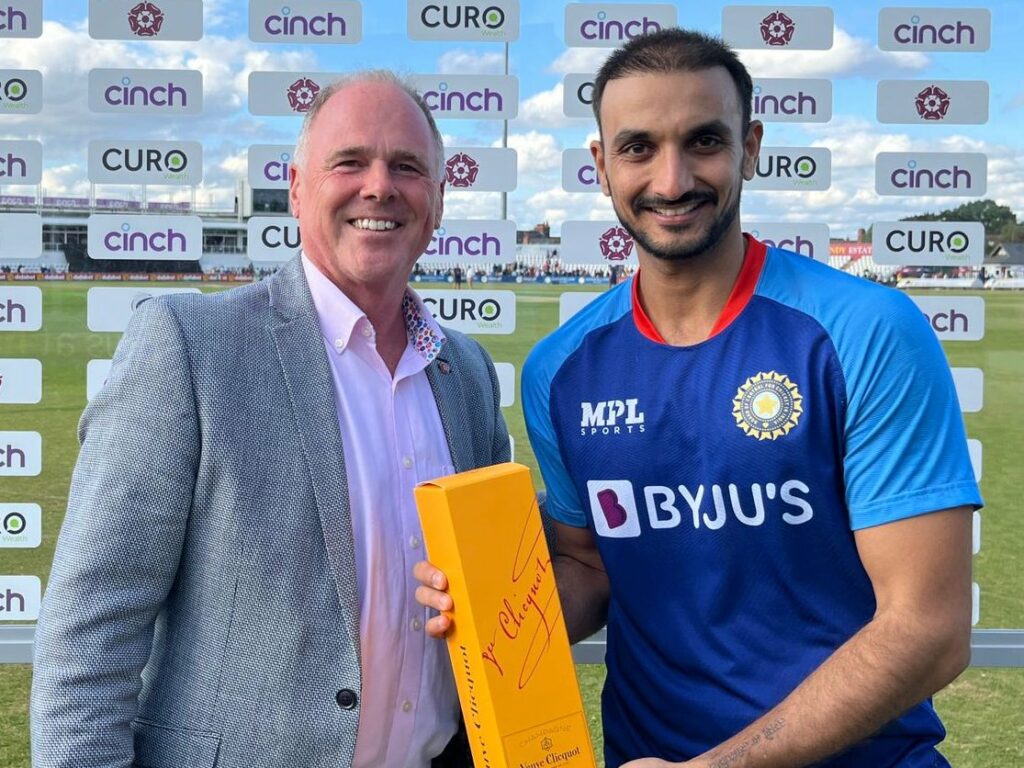 Indian pacer Harshal Patel scored 54 and picked 2/23 as the Men in Blue defeated Northants in the second warm-up game at Northampton on July 3.

India’s preparation for the T20I series against England went well as they claimed both the warm-up matches against Derbyshire and Northants. On Sunday, the Dinesh Karthik-led side defeated Northants by 10 runs at Northampton, with Harshal Patel earning all the praises.

As it happened, Josh Cobb won the toss and sent India to bat first. Cobb set the tone for the home side by dismissing Sanju Samson for a golden duck on the very first ball of the innings. Brandon Glover put a further dent in India’s innings, sending back Rahul Tripathi and Suryakumar Yadav in the third over.

Ishan Kishan (16) and Dinesh Karthik (34) added 43 runs for the fourth wicket before both were dismissed, and India were reeling at 72/5. Patel joined hands with Venkatesh Iyer (20) to rescue the team with a crucial 60-run partnership. Harshal smashed five fours and three sixes in his magnificent knock of 54 off 36 and propelled the team to a fighting total of 149/8.

Defending the target, the visitors didn’t let Northants settle into any partnership and made inroads consistently. 25 for the seventh wicket was the highest partnership for the home side. Emilio Gay scored 22 off 15 at the top, while Saif Zaib fought till the end with 33 off 35. With 11 required off the last four balls, Harshal cleaned up Zaib to clinch the game.

India’s all six bowlers were amongst the wickets, with Harshal, Avesh Khan, Arshdeep Singh and Yuzvendra Chahal claiming two each.  India are set to take on England in a three-match T20I series followed by three ODIs with a full-strength side, starting from July 7 at Southampton.