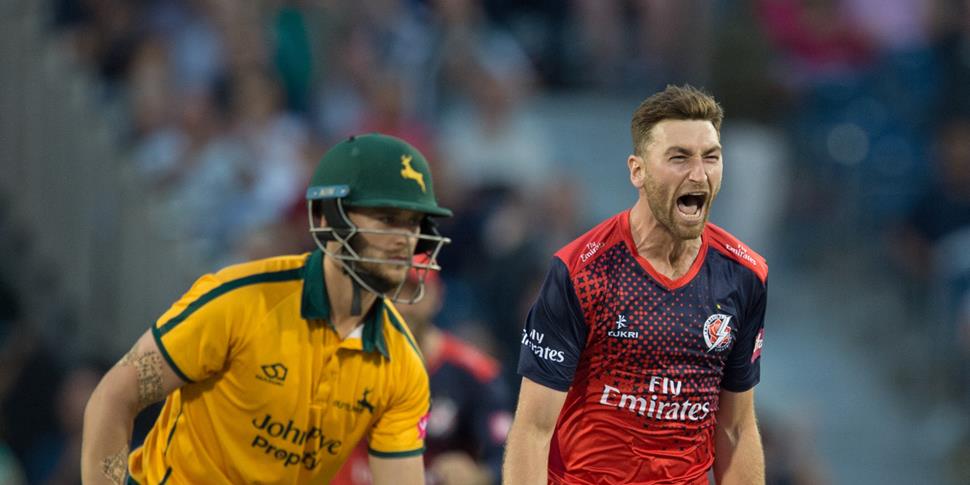 England have handed a maiden call-up to Richard Gleeson for the three-match T20I series against India despite the Lancashire player ageing 34. The seamer could well be in line for a national debut versus the Indians approaching an age where most fast-bowlers are either staring at their sunset or trying to delay the inevitable.

Gleeson is a late-bloomer who made his first-class cricket debut aged 27 and had to spend most of the previous two English summers on the sidelines because of a career-threatening back injury. With his stocks on the decline, he got a glimmer of hope when Lancashire offered him a T20-only contract for the T20 Blast this season.

Playing for the club in England’s domestic competition, the right-arm quick rejuvenated his career with a bagful of 21 wickets in 13 matches at a respectable economy rate of 8.01.

Gleeson has done so while managing his on-field commitments alongside a teaching job to ensure no shortage of finances for his family since he is currently on board with Lancashire for only a portion of the summer.

He happens to be the most noticeable change in the T20I squad for the India challenge, with his inclusion seemingly a direct byproduct of discussions between England’s managing director of cricket Rob Key along with Test head coach Brendon McCullum and Matthew Mott, who is the head of support staff in white-ball cricket.

The discussion, taking place on July 1, revolved mainly around the workload management of players in a busy home summer that involves an all-format series against South Africa, too, after the India visit for a Test, three ODIs and three T20Is this month.

One of the immediate results of the discussion was that none of the players involved in the Test match at Edgbaston this week against the Indians has been picked for the T20Is that follow with only a day’s gap.

Mindful of the burnout that may kick in amidst a super quick turnaround and switch of the formats, the selectors have kept all-format stars Ben Stokes and Jonny Bairstow out of the T20Is. But they, along with Joe Root, feature in the ODI squad.

England’s longstanding first-choice white-ball spin option, Adil Rashid, is confirmed to skip the India visit as he goes on Hajj pilgrimage to Mecca. Respectful of the cricketer’s religious inclination, the think-tank has given Rashid a break from playing duties, with him expected to return for the white-ball leg of the South African visit.

Rashid’s absence means an opportunity for rising wristspinner Matt Parkinson, who looks set to play his first set of internationals in over a year, named as the frontline spinner in both ODI and T20I squads. Parkinson had impressed the decision-makers with his performances last summer and is now Rashid’s immediate back-up.

Named in both the squads, too, is middle-order batter Harry Brook, who is set to replace Eoin Morgan in the batting order after the World Cup-winning skipper’s sudden retirement from international cricket following the end of the Netherlands ODI series.

Also set to miss the ODI outfit versus India is Dawid Malan, who will have to make way for Joe Root after the Test match incumbent missed the Dutch one-dayers as he was busy playing the three-match series against New Zealand. Malan, however, will retain his No.3 spot in T20Is.