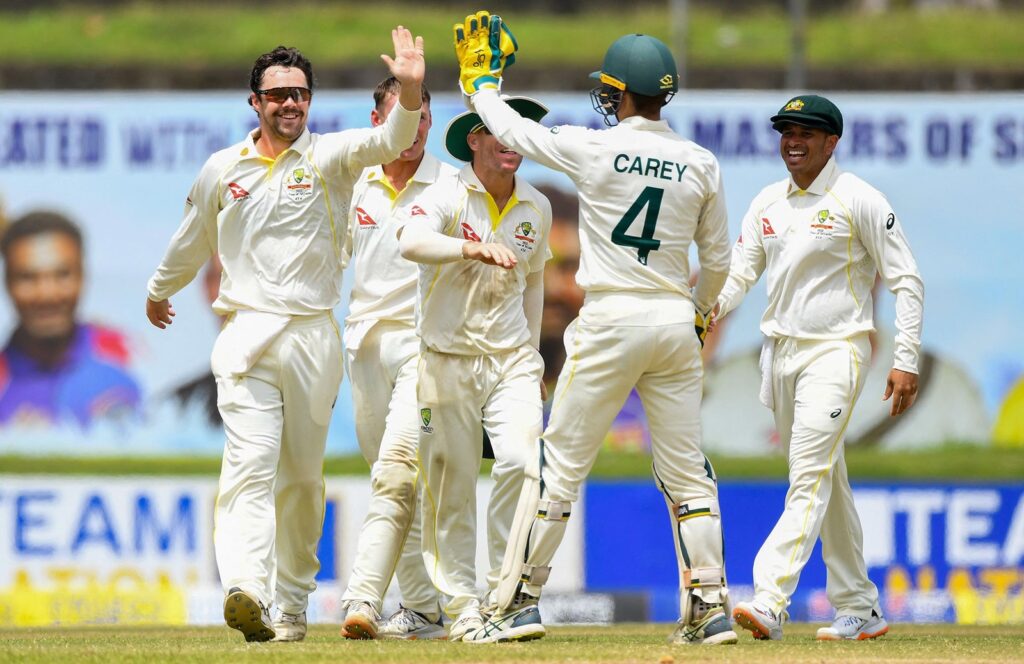 Travis Head and Nathan Lyon bagged four wickets each on Day 3 of the first Sri Lanka-Australia Test in Galle to skittle the hosts out for 113 in the second innings, thereby setting up a comfortable victory.

It took the Aussies just a session to close out on a dominant victory on the third day of the opening Test of the two-match series, with spinners playing the lead roles. Lyon bagged a four-fer in Sri Lanka’s second innings to make it nine for the Test, while wrist-spinner Mitchell Swepson returned 2/34, but it was Head who turned out to be the standout performer, achieving first-class career-best figures of 4/10.

Sri Lanka’s problems began even before a ball was bowled, with experienced allrounder Angelo Matthews ruled out of the game after being tested positive for COVID-19 late on June 30. Oshada Fernando came in as a replacement.

Australia resumed their first innings at an overnight 313/8 and were bundled out for 321 within the first five minutes of the day, as seamer Asitha Fernando dismissed skipper Pat Cummins and Swepson within a space of four balls in just the second over.

The hosts, trailing by 109 in their second innings, made a positive start, with Pathum Nissanka stringing a boundary off Mitchell Starc on the first ball of the innings before captain Dimuth Karunaratne took three on the trot to close out the over.

Another boundary in the left-arm quick’s next over meant that Cummins went to spin from both ends, and it worked on the surface. Lyon had Karunaratne caught behind as the left-hander bottom edged an attempted sweep, while Nissanka fell leg-before trying a similar stroke off Swepson.

The duo continued the hunt and accounted for Kusal Mendis and Fernando in quick succession before Dinesh Chandimal and Dhananjaya de Silva added quick 32 runs within six overs to lift the side from 63/4 to 95/4.

It was at this point that Head turned it on, first castling Chandimal with a perfect off-break on just his second ball before accounting for de Silva leg-before two balls later on review. Lyon had Ramesh Mendis and Dickwella in quick succession – the former being his 434th victim in Tests.

Head had Jeffrey Vandersay in a similar fashion to that of Chandimal before Fernando struck a boundary next ball to take the hosts into the lead. However, that could just be limited to four with the off-spinner removing Lasith Embuldeniya leg-before to bundle out Sri Lanka for 113.

The Lankan Lions crumbled from 37/0 to 63/4 within seven overs, and later 95/4 to 113 all-out within just a space of 4.1. It took David Warner just four balls off Mendis’ first over to seal the chase, with a reverse-swept four being followed by a six over long-on.

Earlier, SL had scored 212 after opting to bat on Day 1, with Dickwella scoring a brisk 58 and Lyon bagging a five-for. Usman Khawaja and Cameron Green scored crucial fifties, while Alex Carey chipped in with a steady 45 to help Australia take a significant lead.

The second Test will be played at the same venue from Friday, July 8.