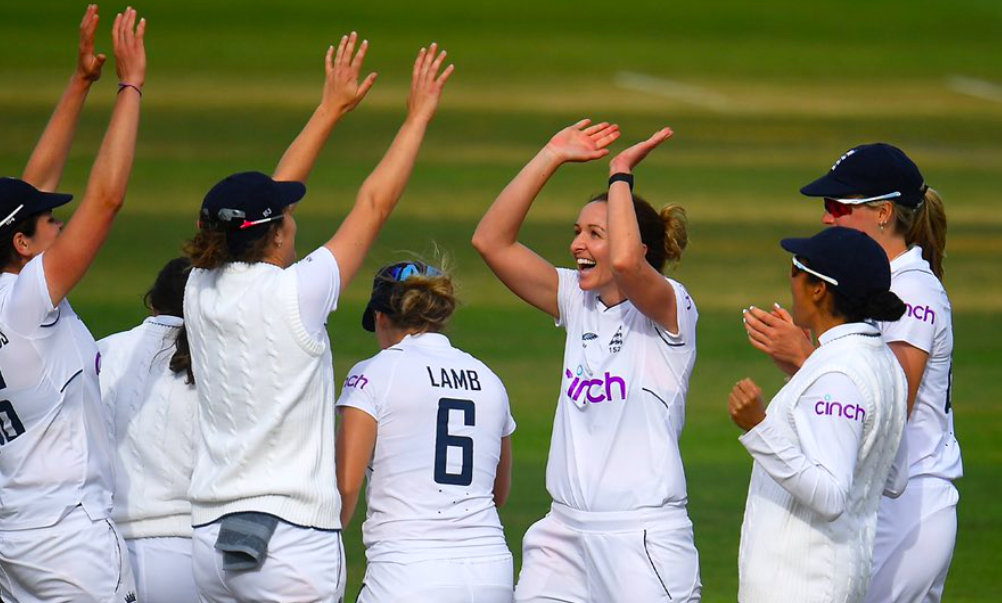 Marizanne Kapp and Tumi Sekhukhune batted for nearly 20 overs on the fourth day, helping the Proteas women draw the Test against England at Taunton with the weather playing a huge role.

England were denied a chance for Test victory over South Africa as the weather had the final say on the final day of the match at Taunton. Sekhukhune and Kapp were the stars for the visitors as they put on an unbroken stand amidst several rain interruptions.

Having taken a first innings lead of 133 runs, England took two wickets in the morning session and reduced the opposition to 118/5. But Sekhukhune and Kapp provided the resistance as they denied England any further wickets and put on an unbroken partnership of 63 in 19.1 overs.

The rain started pelting down just before the scheduled tea, and the umpires had to call the game off later with no further play possible. Sekhukhune batted for 134 balls and scored 33* runs while Kapp remained unbeaten on 43 off 58.

Earlier in the Test, SA were in trouble in the first innings at 89/5 when Kapp stepped up to produce a magnificent knock on her Test debut, scoring 150 to propel the team to 284. Kate Cross was the pick of the bowlers for the hosts with 4 for 63.

In response, the hosts posted 417/8 on the back of another batting masterclass by Nat Sciver, who made an unbeaten 169. Alice Davidson-Richards scored a century on her debut as she added 207 runs with Sciver for the sixth wicket.

England declared their innings on the third day morning and looked on course to a victory, reducing the visitors to 64/4, but the South African pair and rain gods had other plans.