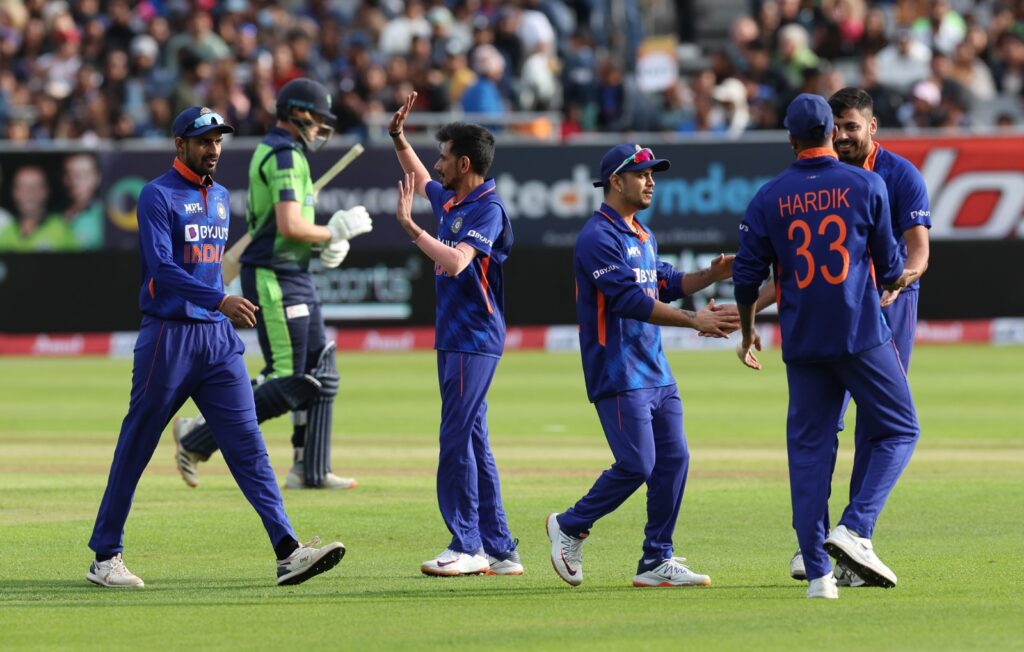 The trio of Bhuvneshwar Kumar, Yuzvendra Chahal and Deepak Hooda shined the brightest on a rain-marred day in Dublin as India ramped home to a seven-wicket victory in the opening T20I of the series against Ireland on June 26.

Reduced to a 12-overs per side game in Malahide, the fixture was a high-scoring affair, where veterans Bhuvneshwar and Chahal made the biggest difference for the tourists while Hooda and the rest provided finishing touches to the victory with the bat in hand.

They were expensive because of a terrific knock from Ireland’s middle-order rising star Herry Tector, who smashed an unbeaten 64 off 33 deliveries, featuring six fours and three maximums, to take his team to a competitive total.

Before Tector got going and took things under his control, Ireland found themselves in all sorts of troubles at 22 for 3, with their top-order star cast – Paul Stirling (4), skipper Andrew Balbirnie (0) and Gareth Delany (8) – struggling against the new ball.

In an innings where the next highest score was just 18 from Lorcan Tucker, Tector almost singlehandedly guided his team over the 100-run mark. Without him, the hosts could easily have folded for an embarrassing score, given the kind of start the opposition had with the ball.

That thanks largely to Bhuvneshwar, who finished with astonishing figures of 1/16 off his 3 overs in a game where both teams managed to eventually reach a run-rate of 9 an over. Apart from the stalwart quick, it was his experienced spin teammate Chahal that kept Tector and men at bay in the middle-overs. The wristspinner delivered an even better spell of 1/11 off his 3 overs quota.

If not for the Bhuvneshwar-Chahal duo, the Indians may have been chasing in excess of 120-125, and that might just have proven a task a little bit uncomfortable for their batters.

Once that didn’t happen, things were always in control for the visitors, who overhauled the Irish score in less than 10 overs, in fact, thanks to a fine hand at the top by stop-gap opening batter Hooda. The spin allrounder was asked to open the innings after Ruturaj Gaikwad went down with an injury.

Hooda initially played second fiddle to fellow opener Ishan Kishan, who blasted a cameo of 26 off just 11 deliveries and gave his partner the space he needed batting for India after a long time. India lost Kishan and subsequently Suryakumar Yadav (0), in quick succession to be reduced to 30 for 2 at one point.

But captain Pandya promoted himself up to resurrect things along with Hooda. He smashed 24 runs off 12 deliveries to keep India ahead of the asking rate, giving Hooda the time to get his eyes in and produced a critical 47 not out off 29 deliveries.