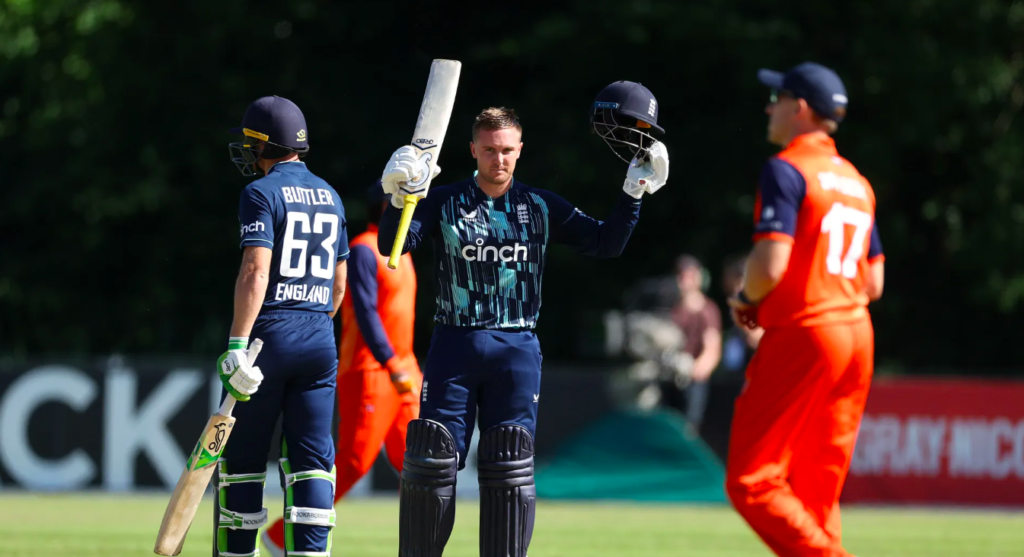 Allrounder David Willey picked 4 for 36 while batsman Jason Roy hammered 101* off 86 as England defeated the Netherlands by eight wickets in the third ODI on Wednesday.

England jumped to the top of the ICC CWC Super League points table with a 3-0 clean sweep over the Netherlands. The third and final match of the series saw Jos Buttler’s men mow down the target of 245 in just 30.1 overs at Amstelveen on June 22.

As it happened, Buttler, who took over in the absence of injured Eoin Morgan, chose to bowl first after winning the toss. The Netherlands were in a pretty good position at one point, with the scoreboard reading 203/3 in 39.5 overs. However, a sudden collapse saw the hosts lose their last seven wickets for just 41 runs.

The Netherlands skipper Scott Edwards registered his third consecutive fifty in the series with 64 off 72, while Max O’Dowd and Bas de Leede also scored fifties. Willey was excellent with the ball for England, claiming 4 for 36 in his 8.2 overs, while Brydon Carse picked 2 for 49.

England were yet again off the blocks quickly, with Phil Salt and Roy putting on an 85-run partnership in just 9.4 overs. Salt missed his third consecutive fifty-plus score by just one run, blasting 49 off 30 and ended up as the series top scorer with 249 runs. Just two balls later, Paul van Meekeren cleaned up Dawid Malan for a duck.

Buttler joined Roy in the middle and the duo took apart the Dutch bowling attack, recording an unbroken partnership of 163 in 20.1 overs. Roy registered his first ODI century in three years – 10th overall – in just 86 balls. Buttler smashed an unbeaten 86 off 64 balls, taking his series tally to 248 runs and was awarded the ‘player of the series’.

England now have 125 points in the CWC Super League from 18 matches, having won 12 and lost five. Their next white-ball assignment will be against India, with three T20Is and three ODIs at home starting from July 7.