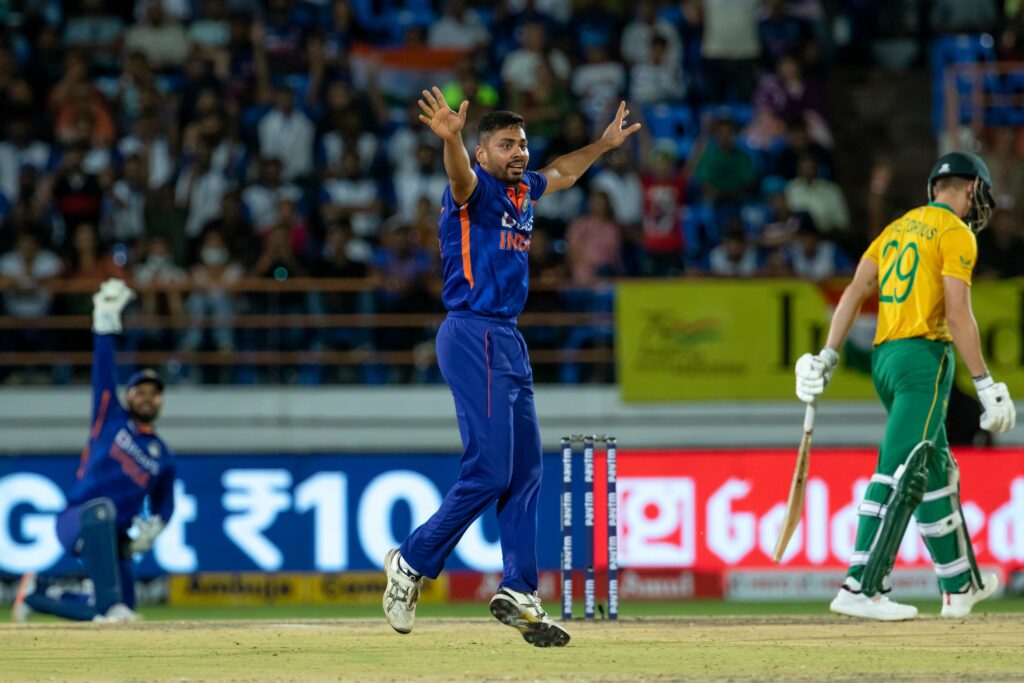 Dinesh Karthik and Hardik Pandya made crucial contributions with the bat before Avesh Khan bagged a four-fer to help India register a comprehensive 82-run win in the fourth T20I against the Proteas in Rajkot on June 2.

In a must-win fourth game of the five-game series, India found themselves struggling at 40/3 and subsequently 81/4 by the 13th over after Rishabh Pant lost a fourth straight toss. However, a spectacular turnaround followed, and the hosts bossed the game thereafter to clinch a resounding 82-run win.

The architects with the bat were Karthik and Hardik, who added 65 off 33 for the fifth wicket to give India a push. DK showcased his exemplary finishing skills during a 27-ball 55 onslaught – his maiden T20I fifty – before falling to Dwaine Pretorius in the final over. He struck nine fours and two sixes in a breathtaking display. Hardik, who walked in the seventh over of the innings, struck three sixes and as many fours during his 31-ball 46.

India didn’t have the best of starts, with Lungi Ngidi and Marco Jansen showcasing supreme control with their seam bowling with the new ball to account for Ruturaj Gaikwad (5) and Shreyas Iyer (4), respectively.

Ishan Kishan looked primed for another big score but was undone by Anrich Nortje extra bounce and pace, edging an attempted upper-cut to the wicket-keeper. Pant struggled for a 23-ball 17, falling to Keshav Maharaj yet again.

South Africa were dented early in the chase, as skipper Temba Bavuma had to walk off retired hurt in just the fourth over after being struck on his left elbow by a short one from Avesh Khan.

Quinton de Kock was run out for 14 in a chaotic mix-up with Pretorius, and the latter edged one behind off Avesh not long after to leave SA at 26/2 (effectively three down) in the sixth over.

Yuzvendra Chahal trapped Heinrich Klaasen leg-before, and Harshal Patel extended his fine run to clean up an in-form David Miller in what arguably was a game-defining blow. Avesh ran through the lower-middle order and combined with Chahal and Axar Patel to clean up the tail as the Protesa were bundled out for 87 in just the 17th over.

Khan returned 4/18 – his career-best, while Chahal finished 2/21 from his four-over spell. Karthik was named the Player of the Match for his game-setting knock.

“We talked about execution and playing better cricket and here are the results.

Really happy with the way Hardik put up a show. DK went for the kill right away and that gave us positivity. As an individual I can look to improve in certain areas. Not too concerned though; looking to take the positives and looking to improve.

Let’s see what happens in Bangalore. Looking forward to giving our 100%,”

The visitors would be sweating over Bavuma’s availability, who didn’t walk out at the post-match presentation after having copped the blow, with vice-captain Maharaj filling in.

India levelled the five-match series 2-2, with the decider to be played at the M.Chinnaswamy Stadium, Bangalore June 19.