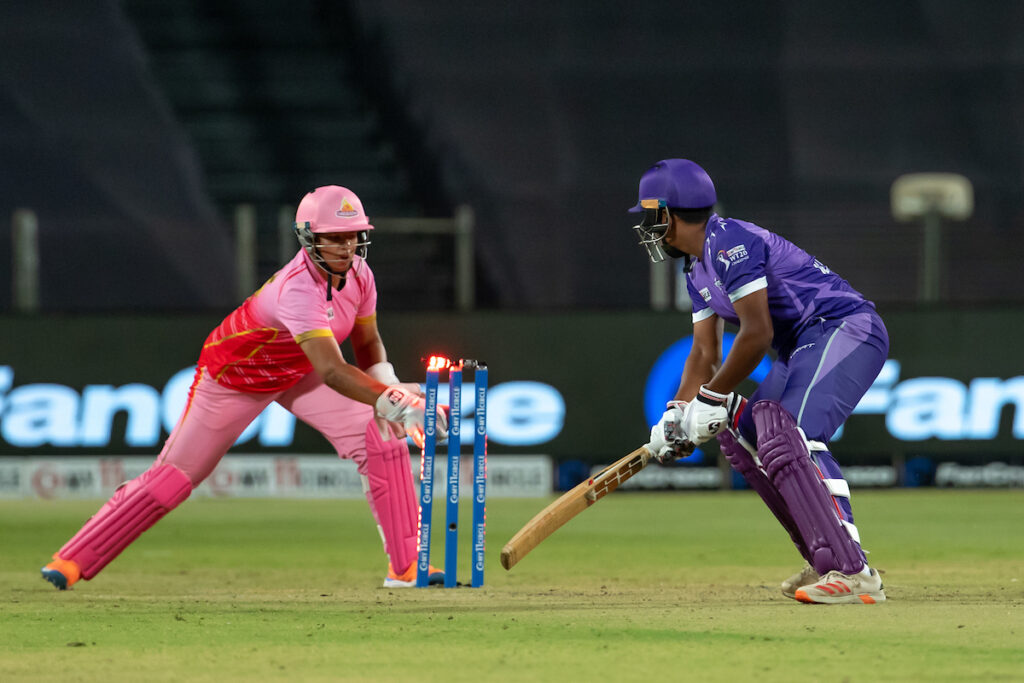 Trailblazers bounced back from their loss against the Supernovas with a comfortable victory over Velocity in the third fixture of the Women’s T20 Challenge, registering a 16-run victory. Both Sabbhineni Meghana and Jemimah Rodrigues have scored half-centuries to take their side to a mammoth total of 190.

In response, there wasn’t a great deal of fight from Velocity, apart from Kiran Navgire, who played quite simply the best innings of the game. Even though her knock wasn’t enough to secure a victory, it was still a fabulously entertaining innings at that, comprising of five fours and five maximums.

Trailblazers, in the end, were able to wrap up the victory without too much effort, even as the competition goes to its final game, where the Supernovas will take on Velocity to decide which team will lift the coveted trophy.

Deepti Sharma won the toss and decided to field first. Sabbhineni Meghana started off in fine fashion for the Trailblazers, but Kate Cross, in the third over got rid of the big fish Smriti Mandhana for just one run, as Mandhana’s pull was matched by a sharp catch courtesy of Simran Bahadur at deep square leg to draw first blood for Velocity.

From that moment onwards, there wasn’t a lot to celebrate for Velocity in the bowling department, as Rodrigues and Meghana joined hands in the middle.

The two batters played brilliantly, attacking at the right moments. They brought up three figures for their side in no time, as Trailblazers looked set for a huge total. It also looked well within their abilities to get centuries, but both batters put their team above personal milestones, and in the process of attacking the bowling, they were both dismissed, within a few overs.

However, Trailblazers also had a ferocious finish up their sleeves. Hayley Mathews and Sophia Dunkley played effective cameos to take their side up to a great total of 190/5.

Even with the kind of batting that Velocity had, the target of 191 was always going to be difficult to chase down. They did get an excellent start, as Shafali Verma and Yastika Bhatia dealt in boundaries. Velocity were going at tens in the powerplay, but both openers were dismissed as well, bringing Kiran Navgire and Laura Wolvaardt into the crease.

Navgire tore apart the opposition attack, smashing boundaries and sixes for fun. Her innings was as effortless as one could imagine, as she raced to 60 off just 24 balls. However, wickets kept falling at the other end, making the Nagaland batter’s job even more difficult. She tried to conjure up a comeback, but the fall of wickets at the other end rendered the task almost impossible.

Navgire was finally dismissed for a wonderfully made 69 in 34 deliveries, as she was stumped off a flighted Dunkley delivery, bringing her valiant innings to a close. Velocity’s chances of victory in the game also took a nosedive with Navgire’s dismissal, as it was only a matter of time before the Trailblazers bowlers finished off the job for the side.

Trailblazers won by a comfortable margin of 16 runs, but will nevertheless not be able to play in the final fixture, which will be between Velocity and Supernovas.