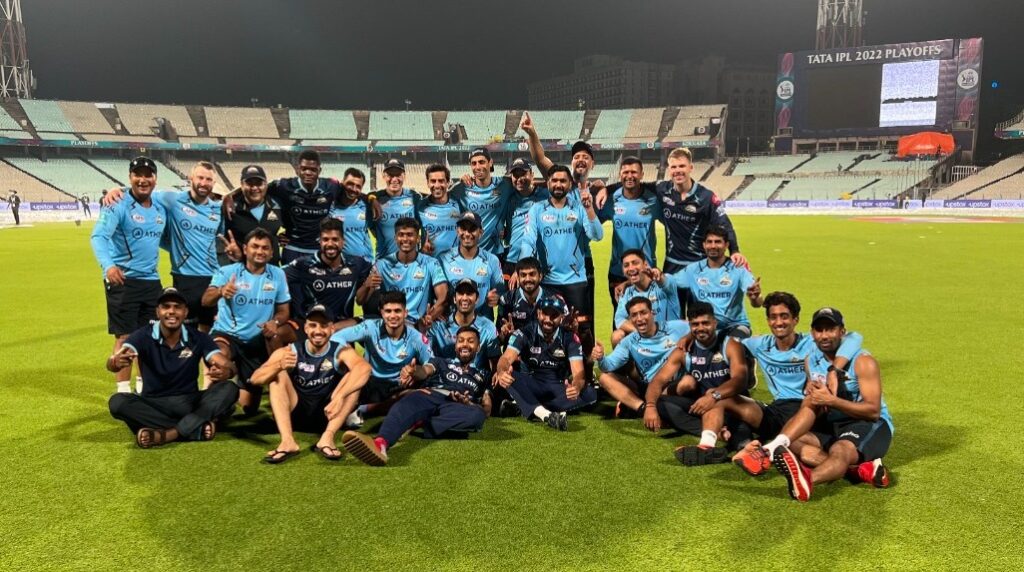 Gujarat Titans returned to winning ways at a time when it mattered most as they got the better of the Rajasthan Royals in a closely contested Qualifier 1. The Gujarat middle-order delivered perhaps quite contrary to popular expectations, with David Miller in the forefront, scoring a brilliant 68* to seal a crucial win for GT.

The left-handed Proteas batsman smashed three consecutive sixes off Prasidh Krishna off the first three balls of the 20th over when 16 runs were needed to script a famous victory for the Titans. Rajasthan, however, will feel that a few short phases of poor bowling cost them the game, but they will have yet another bite at the apple, in the second qualifier, where they will face the winner of the Eliminator between Lucknow Super Giants and Royal Challengers Bangalore.

Sanju Samson failed to win the toss yet again, which led to Hardik Pandya putting the opposition into bat. The Rajasthan innings began with a disappointing Yashasvi Jaiswal innings. The youngster was dismissed for just three runs.

Despite losing the toss, Samson absolutely dominated the Gujarat bowlers. The Royals skipper played a gem of an innings, as he gave his side a superb start in the powerplay. He showcased his unique skillset, playing a high-impact knock of 47 in 26 balls while Jos Buttler took his time at the other end. It was raining boundaries and sixes from Samson’s willow before he was finally dismissed by R Sai Kishore. Nevertheless, the Kerala man had given his side the perfect platform to go berserk.

Buttler, who took his time to get in, teed off after Samson’s dismissal. The Englishman, who was on 33* off 31 balls, raced to 65 in the space of 17 balls. However, Buttler did not get the kind of support he would have hoped for but still continued the onslaught to finish on 89, whilst taking his side to an impressive total of 188/6.

With a total of 189 to chase down in a high-pressure encounter, it was not going to be easy for the Titans to begin with. To make matters worse, an outswinging delivery from Trent Boult brought the end of Wriddhiman Saha for a two-ball duck. However, from that point forward, some average bowling in the powerplay from the Rajasthan bowlers allowed Shubman Gill and Matthew Wade to score quick runs.

It was an abysmal display of bowling from the Royals, who seemed to bowl completely opposite to the field. Nevertheless, the Royals’ poor phase allowed the Titans to stabilise, as Gill and Wade added 72 for the second wicket in quick time as well.

The Royals corrected their initial errors, bowling well in the middle phase, even getting both Gill and Wade in quick succession. Pandya and David Miller, who were brought into the middle, handled the pressure admirably and showed remarkable composure despite the mounting run rate.

With 23 runs needed off the last two overs, Obed McCoy bowled a sensational penultimate over, conceding just seven runs to bring the equation to 16 runs off the final over. The task of bowling the final over was handed to Krishna. However, it was just not the pacer’s day, as Miller unleashed three massive sixes off the first three balls of the over to seal a place in the finals for the Titans in their first season.