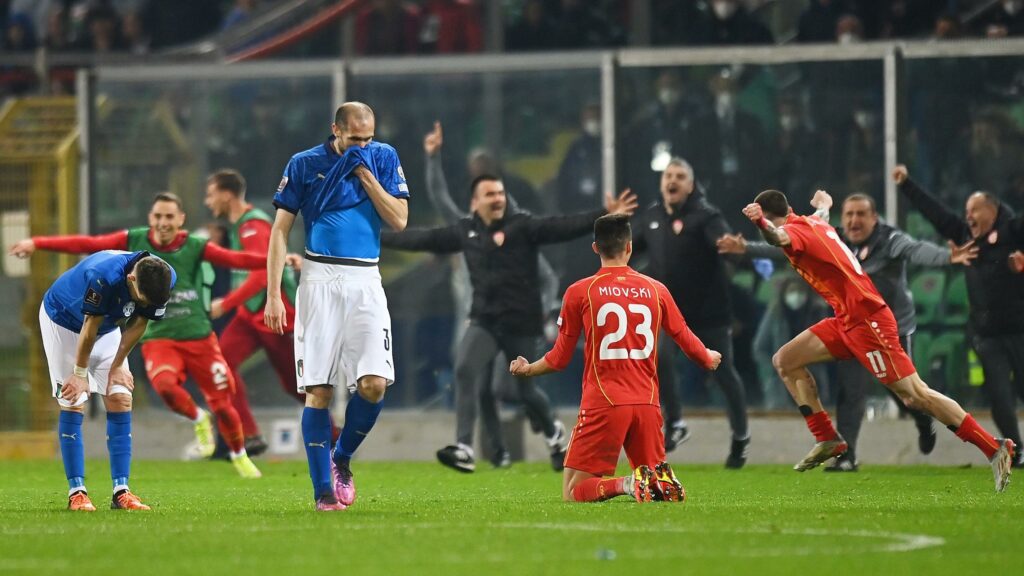 A last-minute goal from North Macedonia’s Aleksandar Trajkovski ensured European champions Italy would miss out on their second straight World Cup. Azzurri missed their train to Qatar following a last-minute defeat against the minnows North Macedonia, making them the first major nation to sit out the tournament.

Custodian Stole Dimitrievski kept the North Macedonians in the game with a string of fine saves in the first half. He denied Domenico Berardi the chance to score into an empty net in the 29th minute, although the shot itself was tame and easily collectable. A minute later, the custodian made a smart save to deflect Ciro Immobile’s shot over the bar.

Roberto Mancini’s men probed for much of the second half, as they did during the first, but to no avail. To make matters worse, a long kick from Dimitrievski in the 92nd minute found its way to Aleksandar Trajkovski, who let his shot fly from distance and wheeled away in delirious celebrations as it nestled into the corner.

Italy suffered a humiliating exit from the World Cup, yet again, while North Macedonia progressed to take on Portugal, who beat Turkey 3-1 in their playoff semifinals, courtesy of goals from Otavio, Diogo Jota, and Matheus Nunes.

Otavio opened the scoring in the 15th minute by tapping in the rebound as Joao Moutinho’s shot bounced back off the post. The Porto attacker then provided the assist for the second goal; he hung the ball in the air for Jota to head in at the back post.

However, Portugal’s inability to kill the game nearly proved to be their downfall. Burak Yilmaz pulled a goal back after some neat combination play with Cengiz Under in the 65th minute and was then afforded a chance to draw Turkey level from the spot in the 85th minute when Jose Fonte was adjudged to have fouled Enes Unal. Yilmaz missed, and Nunes won the game for the Selecao at the other end in stoppage time.

Elsewhere, a brace from Gareth Bale helped Wales beat Austria 2-1 in their playoff semifinal; Rob Page’s side will face either Scotland or Ukraine in the final.

Meanwhile, an extra-time goal from Robin Quaison sent Sweden onwards at the expense of the Czech Republic. The Scandinavians will face Poland for a spot in the World Cup after the latter was awarded a bye against Russia.