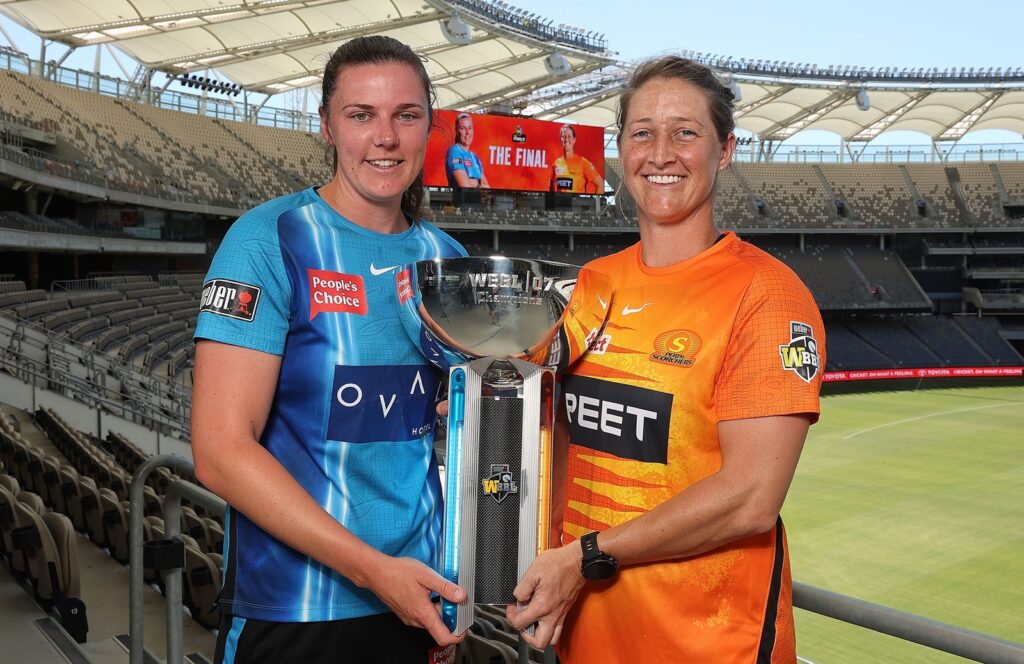 The seventh edition of the Women’s Big Bash League has reached its business end, with Perth Scorchers Women and Adelaide Strikers Women fighting it out for the coveted title in the final. Scorchers will host Strikers at Perth Stadium on November 27 in the big final.

PS led by Sophie Devine, have had an incredible WBBL season, winning nine out of 14 group matches while two matches ended in no result. They topped the table with 20 points and received a straight entry into the final at their home venue. Scorchers have also peaked in the second half of the season, winning five of their last six matches, with the remaining one getting washed out due to rain.

Tahlia McGrath’s Adelaide Strikers Women had to battle hard to reach the final. They finished the group stage in fourth place with 15 points to their name, having won seven matches. Strikers defeated third-placed Brisbane Heat in the Eliminator by eight wickets, chasing 115 in 16.3 overs. Then they went on to hammer second-placed Melbourne Renegades in the Challenger by nine wickets in 10.5 overs after restricting them to 83/8 in 20 overs.

Perth Scorchers have played two finals in the WBBL, and they’d be hoping to be third time lucky while Adelaide Strikers have been Runner-ups once.

Beth Mooney is amongst the best batters across formats in women’s cricket. The left-hander is the leading run-getter in the history of WBBL with 3655 runs from 102 games at an outstanding average of 47 while striking at 123.

Mooney is the top run-getter in this edition as well, having scored 528 runs from 13 innings at an average of 53 and strike rate of 132. Mooney has hammered one century and four fifties in this season and will be a key player for the Scorchers in the final.

Sophie Devine is one of the very best players the women’s game has ever seen. She’s the most valuable asset any team can have in the T20 format. The two-time WBBL player of the tournament, Devine has scored over 3000 runs in the league, averaging 40 and at a strike rate of 129. The all-rounder also has 75 wickets to her name at 7.15 rpo. Devine has been magnificent for the Scorchers this season as well, with 407 runs at a strike rate of 131 while also picking nine wickets.

Tahlia McGrath has seen an incredible rise in recent times, becoming one of the bankable stars in Australia. After starting in the multi-format series against India, she has carried that form into the WBBL. Tahlia has scored 302 runs for Adelaide Strikers in 13 innings at an average of 43 and strike rate of 113, including one fifty. The all-rounder has picked 11 wickets with the ball at 7.04 rpo, with best figures of 3/17. Adelaide Strikers would want McGrath to be at her best against a strong Scorchers side.

Amanda-Jade Wellington is one of the best spin bowlers in Australia women’s cricket. The leg-spinner is amongst the highest wicket-takers in WBBL history, having picked 96 wickets at an economy of 6.81 rpo with 10 three-wicket hauls. Wellington has been sensational this season for Strikers, leading the bowling charts with 22 scalps from 16 matches at an economy of 6.52. Wellington picked her career-best figures of 5/8 in the Eliminator against Brisbane Heat.

The head to head record between these two teams in the WBBL doesn’t show much as Strikers have claimed eight while Scorchers have won six games. Talking about this season, Scorchers have registered victories in both meetings.

Perth Scorchers Women is a terrific unit with hardly any weakness. Their batting line-up is extremely strong, with Beth Mooney and Sophie Devine being amongst top 10 run-getters in the tournament. The Scorchers’ bowling unit has been exceptional, with Lilly Mills, Alana King and Heather Graham snaring 16 wickets each while Marizanne Kapp and Devine also being potent.

Adelaide Strikers also have a very good team inspired by Tahlia McGrath’s all-round display. They have four batters with 300+ runs in the season, with Katie Mack leading the charge. Strikers’ bowling attack has been in great form, having five bowlers with 10+ wickets and Amanda-Jade Wellington being the top wicket-taker in the competition with 22 scalps.

There’s not much to separate the two sides with the quality in both units, but Perth Scorchers will head into the game as slight favourites.