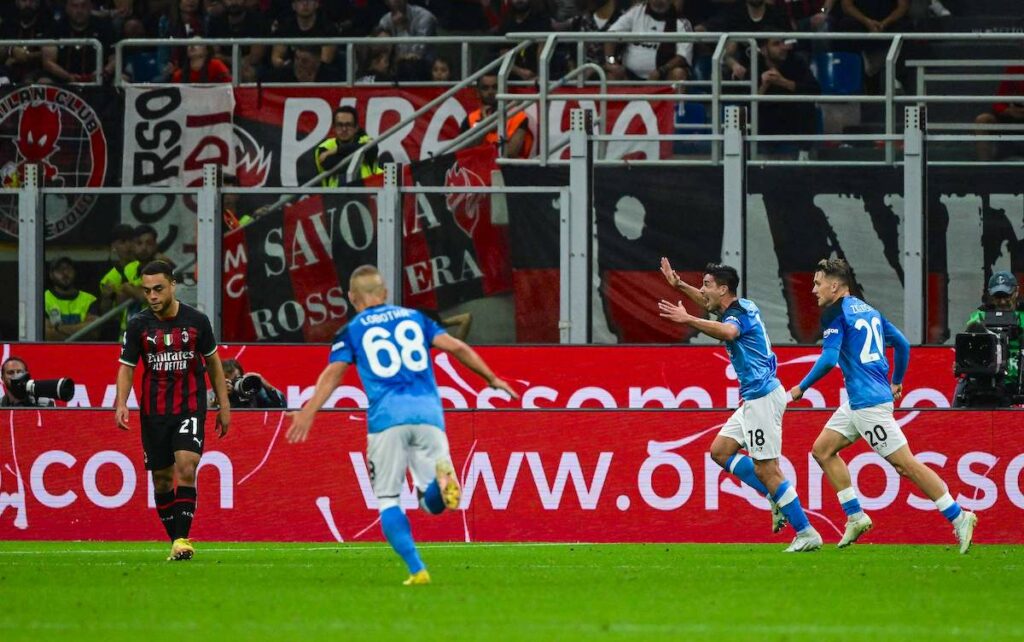 Napoli outplayed AC Milan 2-1 away from home to go top of the Serie A table, ahead of Atalanta, who emerged victorious against AS Roma, and Udinese, who beat Inter Milan, on a remarkable matchday in Italian football.

The Rossoneri succumbed to their first loss of the season, at home to a ruthless Napoli side that resides at the top of the Italian top-flight league table, seven games into the season.

The two sides were close to finding the opening goal in the first half, but parity was broken in the 55th minute when Matteo Politano put Napoli ahead from the spot after Sergino Dest had fouled Khvicha Kvaratskhelia inside the box. The Partenopei’s lead lasted 14 minutes as Olivier Giroud converted a Theo Hernandez cross from close range to level matters.

Shortly after, substitute Giovanni Simeone received a pass from Giovanni di Lorenzo, switched it to the other flank for Mario Rui and timed his run to perfection to meet the subsequent cross from the Portuguese full-back, glancing his header past Mike Maignan to put Napoli back in front. This time, the Neapolitans held their nerves and saw out a memorable win.

In Udine, Inter took an early lead through Nicolo Barella – the Italian scoring from a free-kick five minutes after kick-off. But, Andrea Sottil’s side rallied back, leveling things through a Milan Skriniar own goal in the 22nd minute before scoring twice late on – through Jaka Bijol and Tolgay Arslan – to hand the Nerazzurri a surprising loss. As a consequence of the win, their fifth in a row, the Friulani moved up to third in the table.

One place above Udinese are Atalanta. La Dea beat AS Roma 1-0 on Sunday night to go top of the table, if only for a couple of hours. Teenager Giorgio Scalvini scored in the 35th minute, curling the ball from outside the box around Rui Patricio – the game’s only goal.

Finally, Juventus sunk to new lows after becoming the first team to drop all three points to the Silvio Berlusconi-backed AC Monza this season. The Bianconeri played the entire second half a man less after Angel di Maria was sent off for an elbow on Armando Izzo.

Christian Gytkjaer made the Turinese giants pay when he turned in a cross at the near post in the 74th minute, scoring his first goal of the season that gave Berlusconi’s side their first win in the history of the competition.