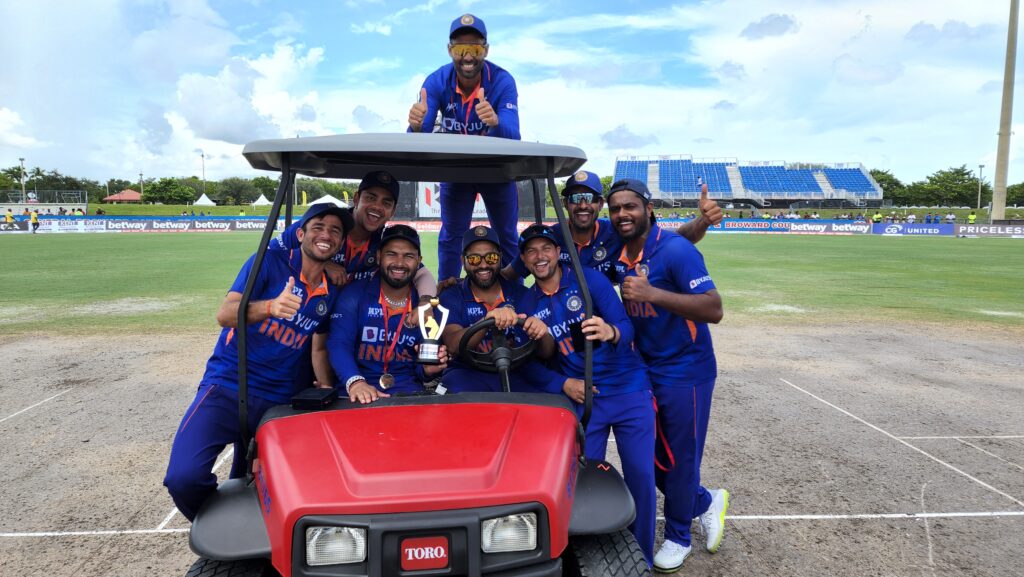 India were ruthless with the bat and ball once again to dominate the West Indies side in the fifth and final T20I of the series in Florida on August 7. It was time for the spinners to rule the roost as they ran through the Calypso Kings in the second half to help the tourists register a massive 88-run victory, dismissing the poor opposition for just 100.

With incumbent Yuzvendra Chahal given a break for the series and the experienced Ravichandran Ashwin rested from the last two matches, India had a total of only 59 T20I caps among Axar Patel, Kuldeep Yadav and Ravi Bishnoi on the park.

Yet, by the end of the game, the trio had a proud record under their belt as they scripted the first ever instance in men’s T20Is where all 10 wickets went to the spinners.

It was Patel who kicked off the West Indian downfall by building inroads into their top-order, bagging figures of 3 for 15. Joining him in the pack through the middle and later stages, Kuldeep picked up 3 for 12 off his 4 overs on his comeback to the T20I side.

Bishnoi had a field outing bowling to the Caribbean lower middle-order, with the young unorthodox wristspinner taking four wickets for 16 runs off his 2.4 overs to close out the proceedings.

On a surface with a dryish tinge, the Calypso Kings looked woefully short of answers to keep the Indian spin troika at bay, managing to bat only three-fourths off their allotted 20 overs. The quality of the Indian spin bowling proved too good for them bar one exceptional player at No.4.

Shimron Hetmyer showcased why he is rated so very highly among fans and experts by smashing his way to 56 off 35 deliveries, including 5 fours and 4 sixes. When others simply had no idea which way the ball was going, Hetmyer was dispatching the Indian spinners to all parts of the ground in Lauderhill.

West Indies needed two more Hetmyers to take the fight back to the opposition, who pulverised the rest of the opposition batting unit, taking 9 wickets at the cost of only 44 runs with 13 from Shamarh Brooks proving to be the second highest score of the innings.

The surface wasn’t the easiest to bat on, but the more skilful and rounded Indian batters found it less of a challenge to get themselves going on it. Resting Rohit Sharma and Suryakumar Yadav, India opened with Ishan Kishan and Shreyas Iyer under stand-in skipper Hardik Pandya.

Kishan, who was playing after a month’s gap, found it difficult to attain rhythm and was out for 11 off 13 deliveries. But his partner Iyer made his opportunity count with a free-flowing half-century, ending with 64 off 40 deliveries to do no harm to his chance for regular selection.

Another player who looked determined to raise his stocks in the set-up was Deepak Hooda, as he smashed the West Indians through his attractive knock of 38 off 25 deliveries. Hooda looked good for so much more when he was out caught in the deep, trying to up the scoring rate.

Captain Pandya was on flow throughout his end-overs cameo of 28 off 16 deliveries and was beginning to set up for a perfect assault on the opposition when he was out run-out.

West Indies had no place to hide with the ball against a strong Indian batting unit and had only one real positive to take out of the fixture in the form of Odean Smith, who outdid himself to pick up 3 for 33 off his 4 overs.