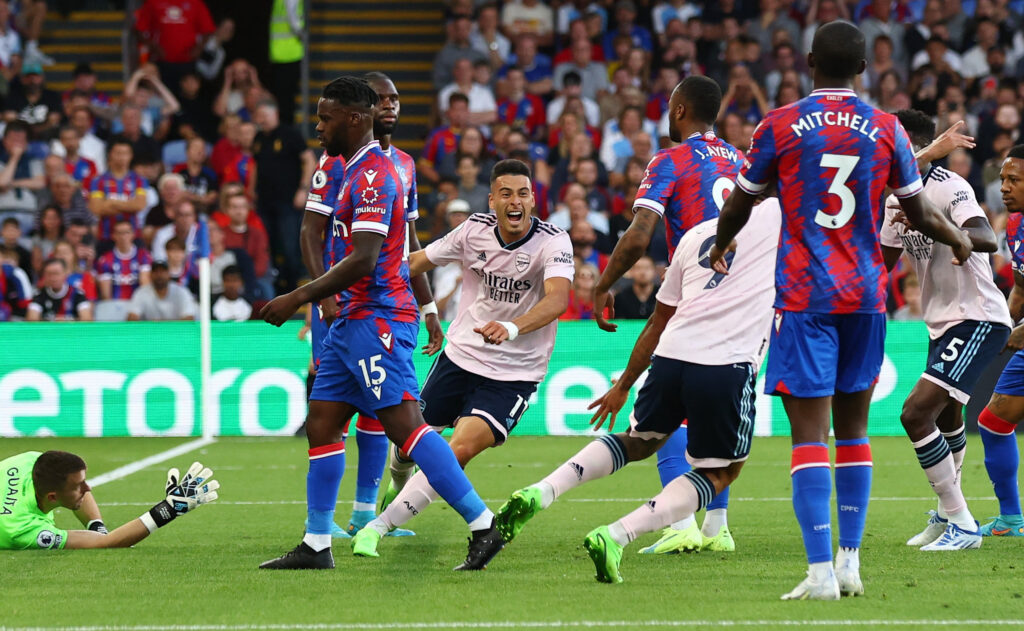 The Gunners opened the 2022/23 Premier League season with a 2-0 win over Patrick Vieira’s Crystal Palace at Selhurst Park Stadium. Gabriel Martinelli put the visitors ahead in the first half before a late own goal from Marc Guehi sealed the points for Mikel Arteta’s side.

Arteta stuck to his guns, starting new arrival Gabriel Jesus up top alongside Bukayo Saka and Martinelli with Martin Odegaard in support. Oleksandr Zinchenko made the team, as did William Saliba, three years after signing for the North Londoners.

While Saliba and сo kept things tight at the back, Zinchenko and Martinelli combined to put Arsenal ahead at the other end. Both players had gone close with attempts early on, but, in the 20th minute, the Ukrainian headed a deep corner back towards the six-yard box, where Martinelli rose above his marker to nod it home.

Palace came within a whisker of equalizing twice on either side of the break, only to be denied by Aaron Ramsdale. First, the Englishman made a superb one-handed stop to divert Odsonne Edouard’s goal-bound header away from danger.

Moments after the break, he made himself big to prevent Eberechi Eze from squeezing the ball past him after the attacker had been released beyond the opposition backline by Wilfried Zaha with a stunning through ball.

Arsenal sealed the points in the 85th minute, gaining control of the game that had begun to slip away from them. Released on the right wing, Saka brought the ball forward and arrowed a cross with his right foot towards the centre of the box, where it deflected off the unfortunate Marc Guehi and nestled into the corner of the net – a rooted Vicente Guaita unable to do anything to prevent the goal.

Arteta’s men play Leicester City at the Emirates next weekend before visiting Bournemouth the week after.